May promises to open new chapter 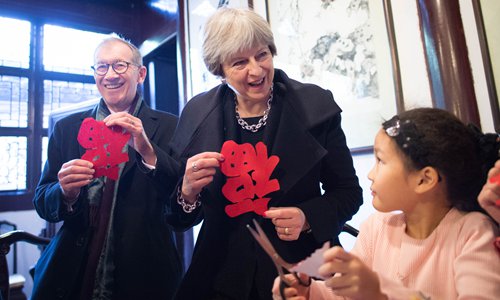 British Prime Minister Theresa May and her husband Philip May hold paper cuts of the Chinese character fu, prosperity, as the couple meets schoolchildren at Yuyuan Garden in Shanghai on Friday. Turning the character upside down is traditionally said to bring good luck to one's front door at Chinese lunar new year. Photo: VCG

Chinese investment is helping the UK develop infrastructure and create jobs, British Prime Minister Theresa May said on Friday as she wrapped up her China trip with trade deals worth 9 billion pounds ($12.8 billion) and vowed to open a new chapter with China in the "golden era" between the two countries.Speaking at the China-UK Business Forum in Shanghai on her third and also final day in China on Friday, May said she was keen to bring to life the vision of globalization and a more open Chinese economy that Chinese President Xi Jinping set out at Davos last year.Chinese investment is helping the UK develop infrastructure and create jobs, with nearly 50,000 British businesses importing goods from China and more than 10,000 selling their goods to Chinese customers, May said."Meanwhile, the UK is preparing to leave the European Union [EU]. We're seizing the opportunity to become an ever-more outward-looking Global Britain, deepening our trade relations with nations around the world - including China," she said.The forum was attended by chief executives of top Chinese companies, including Jack Ma Yun of Alibaba and Fosun International Chairman Guo Guangchang.May also visited Shanghai's Yuyuan Garden with her husband Philip May Friday.May's visit to China has attracted wide attention in Chinese media, where her nickname "Auntie May" was popular on China's social media."May is visiting China at a time when the future of the UK is full of uncertainty. So she's like a super saleswoman who's trying hard to create new opportunities for Britain after it leaves the EU," Ding Chun, director of the Center for European Studies at Fudan University in Shanghai, told the Global Times on Friday.China and the UK have also signed a series of commercial deals in the creative industries worth a potential of up to 300 million pounds, according to the British government.But experts said the complicated political situation at home means May had reservations about going too far with China. For example, despite cooperation between Chinese and UK banks, May did not sign a memorandum of understanding, or a formal endorsement, of China's Belt and Road initiative.Boosting financial ties with China was a major mission for May's visit to China. Concluding her trip, May said in her Friday speech in Shanghai that through her meetings with President Xi and Premier Li Keqiang, China has agreed to open up the market to some of Britain's world-class financial services providers.  Premier Li said on Wednesday that China agreed to accelerate final preparations for the Shanghai-London Stock Connect and to review the timeline for its launch when conditions permit, according to the Xinhua News Agency.Chinese experts said the boosting of financial ties with Shanghai will increase London's confidence, hit hard by Brexit. The European Commission on January 31 rejected London's proposal for a free trade deal in financial services after Brexit, which may result in powerful financing companies moving their operations out of London to the continent, Reuters reported."Compared with its other industries, Brexit's blow to the UK financial industry will be the hardest. If the Shanghai-London Stock Connect is successfully launched, that will bolster the UK's status as a global financial center and allow it to have more bargaining chips when negotiating the Brexit deal with the EU," Ding said.Chinese entrepreneurs expressed optimism about Sino-British cooperation. "I believe this is an age of trust, and we have no reason not to trust the UK, which has been an advocate and defender of global free trade," Alibaba's Ma Yun said on Friday."I hope the UK's innovation capabilities, ideas in education, experience in fighting smog and the gentlemenly style of British men can all be imported to China," Ma said.  "London has the biggest foreign exchange market in the world and the first offshore renminbi (RMB) clearing center in Europe... It has a good foundation in supporting the internationalization of the RMB, which will drive more China-UK cooperation," Fosun boss Guo said.