WORLD May still hoping for vote on her Brexit deal

May still hoping for vote on her Brexit deal

The Latest on Britain's exit from the European Union (all times local): 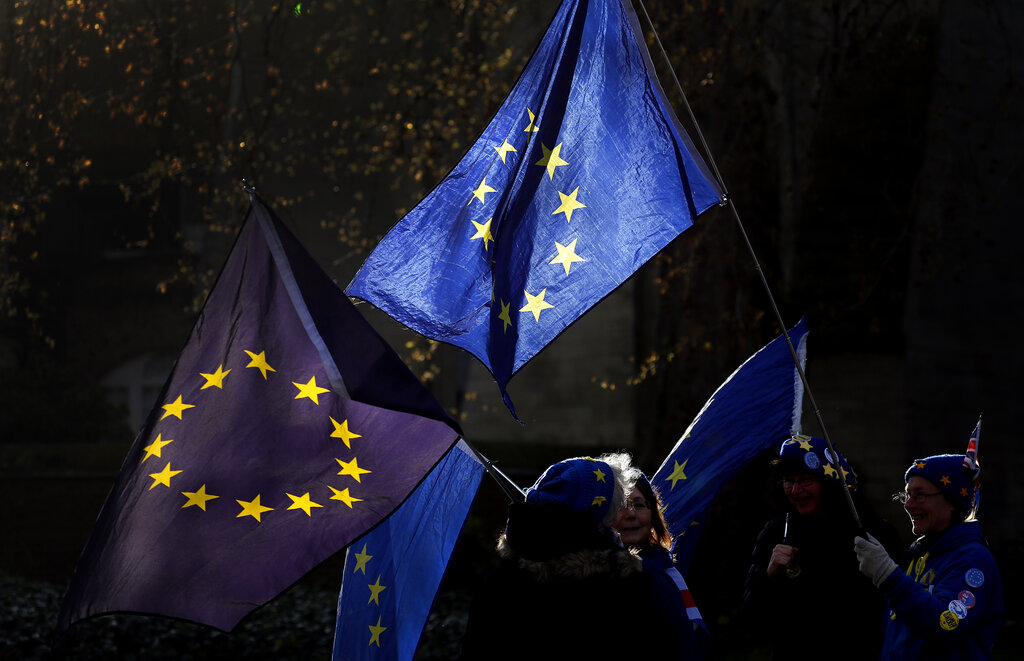 Pro-Europe demonstrators protest against Brexit near the House of Parliament in London, Tuesday, March 26, 2019. (Photo: AP)

The leader of the House of Commons says Britain's government still hopes to bring Prime Minister Theresa May's European Union divorce deal back to Parliament for a vote this week.

Andrea Leadsom told the BBC on Wednesday that there is a "real possibility" the agreement will be considered on Thursday or Friday.

She says "we're completely determined to make sure that we can get enough support to bring it back." She added that the deal is the only way to guarantee Britain leaves the EU.

Some opponents say they may now vote for the deal amid fears parliamentary deadlock will lead to Brexit being delayed or abandoned.

Brexit supporter Jacob Rees-Mogg says May's deal is still a bad one, but "the risk is, if I don't back it, we don't leave the EU at all."

The chief of the European Union's Council says the bloc should be open to welcome Britain at the European Parliament's May 23-26 election even as it prepares to leave.

Referring to recent protests and petitions by pro-EU groups in Britain, EU Council President Donald Tusk told legislators Wednesday: "They may feel they are not sufficiently represented by the UK parliament but they must feel that are represented by you in this chamber. Because they are Europeans."

He said it is "unacceptable" to think, as some do, that Britain should not take part in EU business as the country prepares to leave.

British lawmakers are preparing to vote on alternatives for leaving the European Union as they seek to end an impasse following the overwhelming defeat of the deal negotiated by Prime Minister Theresa May.

The House of Commons is scheduled to debate the various alternatives Wednesday, after which lawmakers will be asked to vote for all of the options they could accept. The most popular ideas will move to a second vote on Monday in hopes of finding one option that can command a majority.

The debate comes two days after lawmakers took control of the parliamentary agenda away from the government amid concern May was unwilling to compromise.

May has said she will consider the outcome of the "indicative votes," though she has refused to be bound by the result.