WORLD May tries to save Brexit plan ahead of EU summit

May tries to save Brexit plan ahead of EU summit

British Prime Minister Theresa May will write to EU President Donald Tusk with a plan for delaying Brexit beyond March 29, her spokesman said, admitting the parliamentary deadlock had reached crisis levels.

The letter will be sent before May heads to a Brussels summit on Thursday, where she has already promised to seek what could be a lengthy postponement of Britain's exit from the European Union. 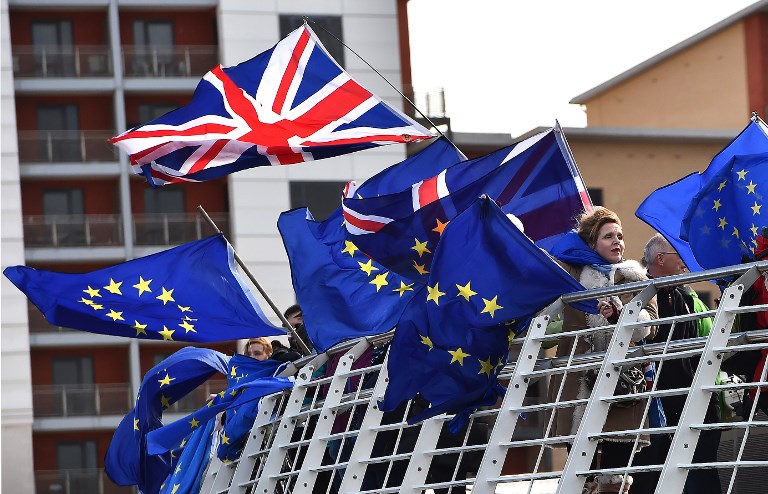 Anti-Brexit activists fly EU and a Union flag from the Millennium Bridge during a demonstration by fishermen on the River Tyne in Newcastle, northeast England on March 15, 2019, against the terms of the current Brexit deal being offered by Britain's Prime Minister Theresa May. (Photo: AFP)

May had hoped to persuade MPs before then to back the divorce agreement she has struck with the EU, but her plan to hold a fresh vote was dramatically blocked by the speaker of the House of Commons.

Exasperated European leaders are now demanding London tell them clearly what it wants, warning that the risk still remains that Britain could crash out of the bloc in 10 days, ending its 46-year membership without formal arrangements.

Michel Barnier, the European Union's chief negotiator, warned on Tuesday that any extension of the Brexit talks would have "political and economic costs" for the remaining 27 EU states.

"A long extension... should be linked to something new, a new element or new political process," Barnier told reporters, urging May to secure the backing of the British parliament for any request.

"How can we ensure that, at the end of a possible extension, we are not back in the same situation as today?" he asked.

May's letter to Tusk would come by Wednesday, her spokesman said, as reports spoke of her seeking a 12-month delay. She will also face questions from MPs in Parliament on Wednesday.

However, Britain's ambassador in Prague Nick Archer said Tuesday that London was also wary of a lengthy extension with European Parliament elections due to be held across the bloc in May.

"The government does not want to have to go into European elections again, does not want to go anywhere near the multi-annual financial framework," he told the CTK Czech press agency, referring to difficult and lengthy EU budget negotiations.

The British premier is struggling to keep control of the Brexit process after MPs last week decisively rejected her divorce deal for a second time.

She has reluctantly accepted that Brexit must be postponed, amid fears of an economic shock if Britain ends its membership of the EU with no new arrangements in place.

But she said that if MPs backed her deal this week, it might only be a short delay to ratify the text.

This plan was scuppered on Monday when Speaker John Bercow delivered a surprise ruling that she could not keep bringing her deal back to MPs without changes.

But May had been by no means certain of getting her deal through parliament this week, as many Brexit-supporting MPs believe it keeps Britain too closely aligned to the EU.

US President Donald Trump's eldest son, Donald Trump Jr., waded into the debate Tuesday, writing in the Daily Telegraph newspaper that May's latest plan to delay Brexit signalled "that democracy in the UK is all but dead".

Talks continue with the aim of persuading MPs in May's Conservative party and their Northern Irish allies, the Democratic Unionist Party (DUP), to back the text.

There is speculation too that any EU deal she strikes on delaying Brexit might be enough of a change to persuade Bercow to allow another vote on it next week.

In Berlin, German Chancellor Angela Merkel said: "I will fight to the last hour of the deadline on March 29 for an orderly exit."

But an aide to French President Emmanuel Macron warned: "An extension is not for certain or automatic."

Former Prime Minister Tony Blair called for a delay of 9-12 months, telling the BBC: "Whatever you have by way of extension, make it count and make it count by having a plan for it that allows Parliament to reach a conclusive opinion on the central Brexit question - soft or hard?"

'Only deal on the table'

The speaker's ruling added further drama and complexity to an already chaotic Brexit process that has exposed deep rifts in parliament.

MPs still cannot agree how to implement the 2016 referendum, reflecting how voters remain divided almost three years after they voted 52 to 48 percent for Brexit.

May continues to insist that her agreement, covering citizens' rights, Britain's financial settlement, plans for the Irish border and for a post-Brexit transition period, is a good compromise.

She sought and obtained clarifications on the operation of the so-called Irish border "backstop" to appease some of her MPs but some still want more.

Several Conservative MPs suggested that following Bercow's ruling, May must now return to the negotiating table, even at this late stage.

However, Brexit Secretary Steve Barclay warned: "It is the only deal on the table from the EU -- the EU have been consistent on that.

"Either we back the prime minister's deal and get Brexit over the line or we risk either a softer Brexit or no Brexit at all."