WORLD May triumphs at party conference, but crucial Brexit showdown looms on horizon

May triumphs at party conference, but crucial Brexit showdown looms on horizon 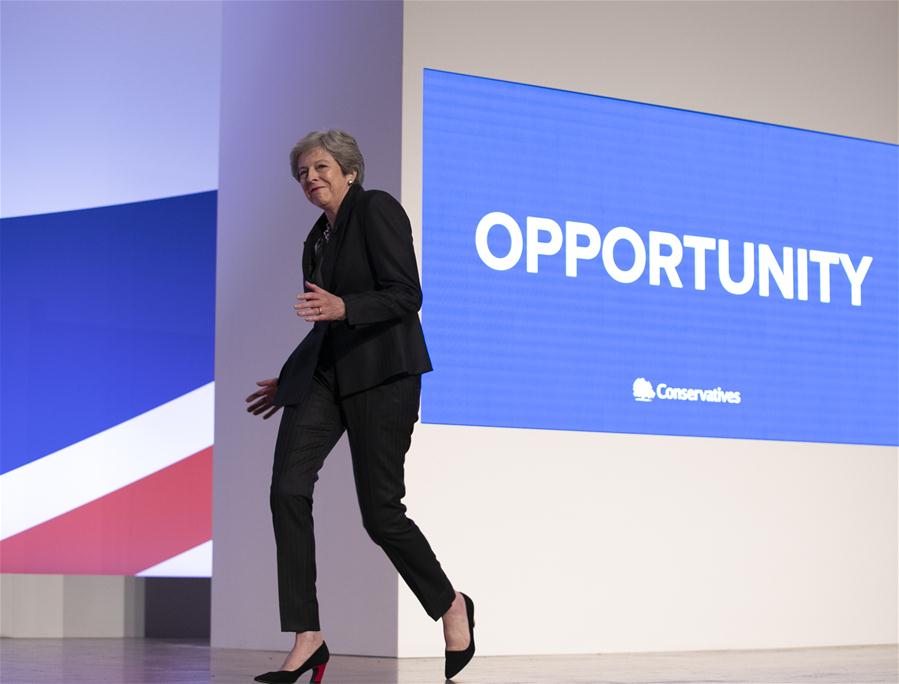 LONDON, Oct. 3 (Xinhua) -- British Prime Minister Theresa May stole the show as she brought the four-day Conservative Party Conference to a close Wednesday in Birmingham.

A year ago everything that could go wrong did go wrong, with May struggling to make her speech because of a throat infection, and suffering of the platform backdrop falling apart.

Dancing onto the stage to the tune of Swedish pop group ABBA's hit "Dancing Queen", May mocked herself, jokingly saying if she lost her voice it was because she had been up half of the night super gluing the stage set.

"The best speech I've ever seen May deliver," said one political writer, while another said: "Best speech of May's premiership. Ends conference on a high, cements her position as leader. But nothing has changed. The Brexit reckoning is delayed."

The Guardian's summary was that political commentators had generally been very positive, with some thinking it's her best yet. Although, added the Guardian, there is quite a lot of skepticism about whether she can deliver.

In her speech, May promised to deliver the Brexit the British people had voted for and there would be no referendum or people's vote -- laid into the prospect of a Labour government led by its leader Jeremy Corbyn. She announced local councils would be free to borrow as much as they wanted too for a massive social house building program. She also threw in that a decade of austerity was finally over for Britain.

The auditorium packed with Conservative Party loyalists gave her a standing ovation before heading home with a message in their ears that Britain must remain united as it plans its life away from the European Union (EU).

Political opponents, however, were not as enthused as Conservative supporters of May.

Labour's Shadow Chancellor John McDonnell, said: "Theresa May's claim that austerity is over is a con. If the Prime Minister wants to back up her words with action, Philip Hammond should announce immediately that the cuts scheduled for the next four years will be cancelled."

"If he cannot, or will not, then Theresa May's announcement today was not just empty -- it was clearly a deceitful attempt to trick the public."

Ian Lavery, chair of the main opposition Labour Party, said: While the country is crying out for real change, all Theresa May and her party offer are pinched ideas and tinkering around at the edges, relying on petty attacks to cover up their lack of vision."

"Austerity is not an economic necessity. It is a political choice made by the Conservatives to hack away at our public services and communities, leaving workers worse off while gifting huge tax cuts to big business. And as long as Britain has a Conservative prime minister, we'll never see an end to austerity."

Vince Cable, leader of the minority Liberal Democrats said: "As somebody who takes dancing seriously, I was delighted to see Theresa May show that she is developing her new hobby. But she was dancing on the head of a pin, confronted by an audience full of people plotting to oust her."

Cable said that May said the Conservatives must be a party for the whole country, adding "yet she has overseen widening divisions in our society. Trapped by the rabid ideologues of the Conservative right-wing, Mrs May has been driven to illiberal extremes on Brexit, welfare and immigration."

The Local Government Association which represents hundreds of town halls and city halls, described her decision to lift the borrowing cap for building houses as fantastic.

Its chairman Lord Porter said: "Our national housing shortage is one of the most pressing issues we face and it is clear that only an increase of all types of housing, including those for affordable or social rent, will solve the housing crisis."

Away from politics, the Confederation of British Industry director general Carolyn Fairbairn, said: "The Prime Minister's unambiguous call to back business is welcome. Unity in politics can be matched by unity between government and business. Championing a pro-enterprise economy is the only way to show the world that Britain is a fantastic place to create the products and services that power growth."

"A new relationship with Europe based on the Chequers model with frictionless trade has strong business support. The Prime Minister has stood her ground, resisting the fiction that a Canada-style deal works for jobs. Now politicians should support her to get a deal -- and the critical withdrawal agreement -- over the line."

"Brexit must not suck the oxygen out of domestic policy. Here too there will be support from firms large and small. A renewed approach to housing and education will lift productivity and improve people's lives," added Fairbairn.

James Forsyth, political editor of the Spectator magazine and a columnist at the Sun newspaper said: "May delivers one of her best speeches, and will send activists home in better heart than they expected this morning."

But he added that with May facing a crucial meeting of the European Council in two weeks, Brexit will soon reassert itself.