WORLD May urges EU to 'step forward' for Brexit deal

May urges EU to 'step forward' for Brexit deal 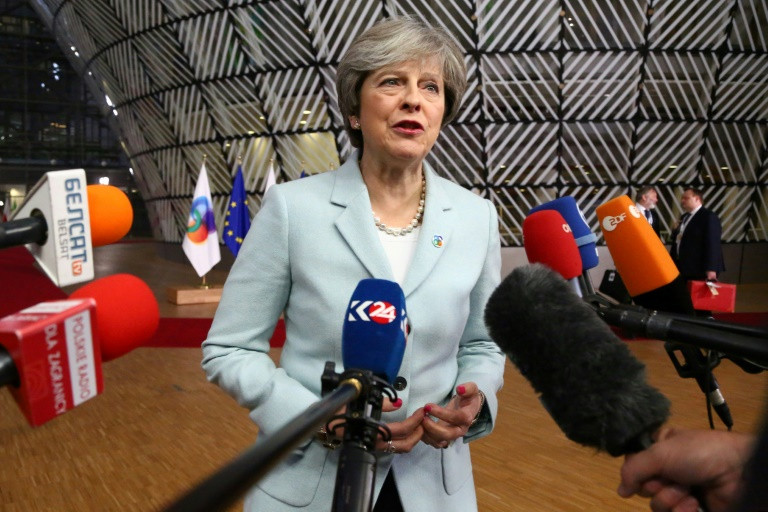 Prime Minister Theresa May urged the EU to "step forward together" with Britain on Friday as the bloc's leaders hoped she would finally offer a compromise to reach a Brexit divorce deal in December.

The embattled British premier met German Chancellor Angela Merkel, EU President Donald Tusk and other leaders on the sidelines of a summit with ex-Soviet states in Brussels as part of a bid to unlock negotiations on a future trade deal.

Impatient EU leaders were increasingly hopeful she would bring a new proposal on the thorny issue of Britain's exit bill, after senior British ministers agreed earlier this week to improve the offer to a reported 40 billion euros ($47 billion).

Arriving in Brussels, May refused to deny she was ready to bump up the amount Britain would pay, but insisted any such move must be tied to a final deal on future relations next year.

"These negotiations are continuing but what I'm clear about is that we must step forward together. This is for both the UK and the European Union to move to the next stage," she told reporters.

At a meeting in Gothenburg, Sweden, a week ago, Tusk gave May until the start of December to make "much more progress" in order to unlock trade negotiations at an EU summit on December 14-15.

May's hastily arranged talks with Merkel, whose status as Europe's most powerful leader has been undermined by the collapse of German coalition talks, were "very constructive", her Downing Street office said, without giving any further details.

May also pushed her case with the leaders of Belgium, Denmark and Lithuania, who appeared to offer tentative support.

"From my perspective it seems that they are progressing, so I have decided to be optimistic about this, and I really hope that we can move forward in December," Danish Prime Minister Lars Lokke Rasumussen told reporters after meeting May.

Belgian Prime Minister Charles Michel said on Twitter that "clarity on our future relations is in everyone's interest."

Timeline of the Brexit talks

European Commission President Jean-Claude Juncker said he was more confident than before about a deal but added nothing would be decided before he had dinner with May on December 4.

"The actual final phase begins on December 4. There is some movement, I don't know in which direction, but I hope in the right direction," the former Luxembourg prime minister said.

The EU insists Britain must tie up divorce terms -- the exit bill, the Irish border and the rights of EU nationals living in Britain -- before there can be any talks on future relations.

EU member states have become increasingly impatient for Britain to comply, and also worried that May's fragile Conservative government is unable to do so even if it wanted to.

"It's high time the English came with clear proposals," a European diplomatic source said on condition of anonymity. "The more the English let us stew, the more unified we become."

Ireland remains a major sticking point, with Dublin stepping up threats to veto a deal if its concerns about the border with British-ruled Northern Ireland are not taken into account.

"If progress isn't made in terms of more clarity and more credibility... in a way that prevents a hard border on the island of Ireland, well then we cannot move on to phase two," Irish Foreign Minister Simon Coveney said.

Coveney admitted however that a political crisis in Ireland over the deputy prime minister's handling of a police whistleblower case had left the government in a "precarious position".

"The financial question is the least difficult issue in the negotiations. So far, the Irish question is unsolvable," an EU diplomat said.

Failure to reach a deal at the December summit would leave little time for trade talks, which the EU wants to wrap up in October to allow time for a deal to be ratified by national parliaments ahead of Brexit Day on March 29, 2019.

May meanwhile said her presence at the so-called Eastern Partnership Summit with six former Soviet states showed that Britain was "unconditionally committed to maintaining Europe's security" despite Brexit.

She also took aim at Moscow, saying Europe must be "open-eyed to the actions of hostile states like Russia which... attempt to tear our collective strength apart."