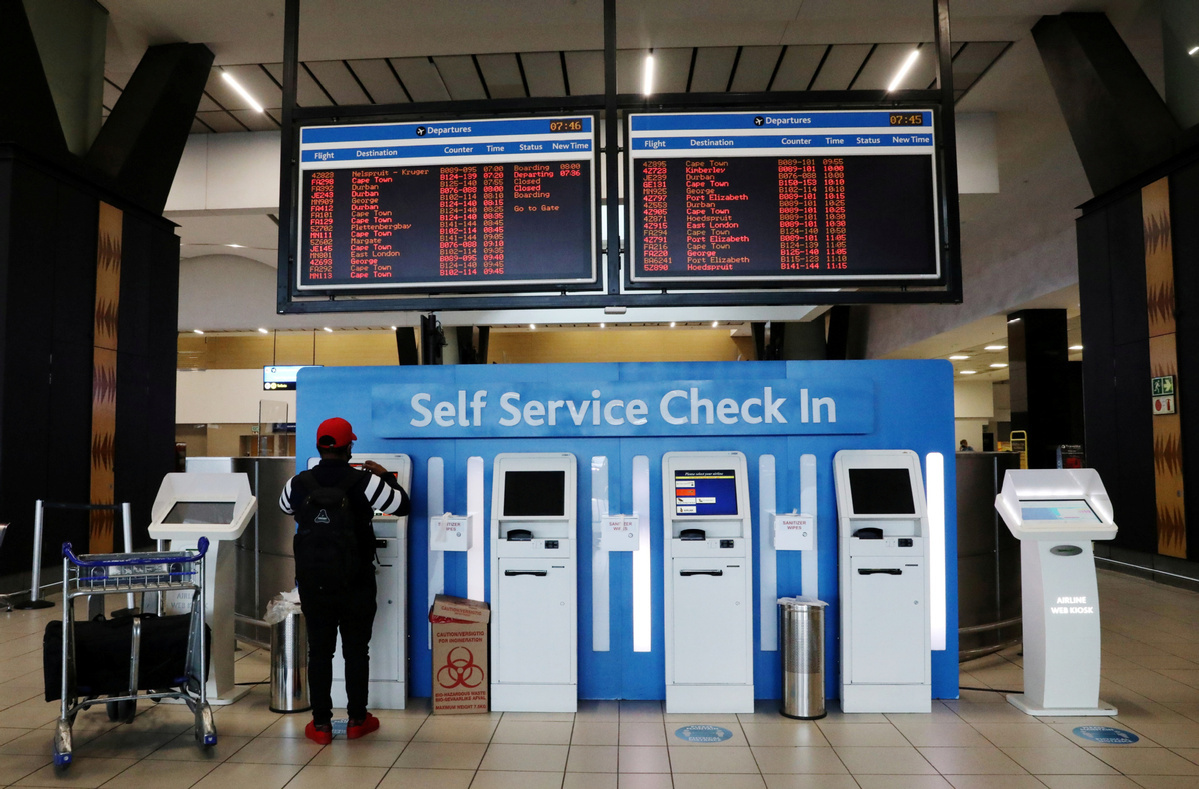 A passenger is seen at the self service check-in counter at the O.R. Tambo International Airport in Johannesburg, South Africa, Dec 22, 2020. [Photo/Agencies]

A report by the African Airlines Association and the United Nations Economic Commission for Africa says many African airlines risk closing down due to a liquidity crunch caused by the COVID-19 pandemic which worsened their indebtedness to banks, aircraft lessors and manufacturers and has left them running on survival mode.

The report, published on March 9, titled "Policy Research Paper, COVID-19 and African Airlines Overcoming a Liquidity Crisis". It said the airlines are forecast to lose more than $5.5 billion in revenue and drop their overall contribution to GDP by more than $25.5 billion.

At least 3.1 million jobs in the aviation sector have been lost between 2020 and 2021 on the continent. The report revealed the worst-hit countries are South Africa, Nigeria and Kenya.

"Airlines have grounded their aircraft, leading to a liquidity crisis with implications for debt repayment, leases and remuneration of staff. This has also impacted refunds to passengers for canceled flights and maintenance of aircraft among other financial requirements," the report said.

Travel restrictions placed around the world since last year have not been fully relaxed, and many airlines are in deep financial trouble and cannot recover on their own, it said.

The African Airlines Association says air transport in the continent supports 7 million jobs, with a $64 billion contribution to Africa's economy. Before COVID-19, Africa had about 76.6 million air travelers a year, with numbers projected to reach 303 million by 2035.

By April last year, flight departures in Africa were estimated to be about 95 percent lower, compared to a global decline of 78 percent.

"The fast-eroding liquidity of airlines threatens their very existence. It puts them at risk of insolvency, underscoring the need for urgent financial support to overcome the crisis, in particular direct cash injections. Such support is necessary to ensure airlines are able to restart operations as countries gradually reopen their economies and borders," the association said in the report.

Abderahmane Berthe, secretary-general of the African Airlines Association, said the association continues to advocate for direct government support for airlines and for them to create a platform to coordinate their efforts toward the survival of the industry, in particular by linking airlines and financial institutions and facilitating access to available funds.

"Financial support to the industry is critical for survival. Some of the measures that we are appealing to governments to implement include providing grants, loans and loan guarantees, issuing equity and also deferring or waiving payments of debts, rents, charges and taxes by airlines."

The report goes further, recommending strategies and plans for the survival, recovery and sustainability of the industry on the continent. Emphasis was also placed on creating more business opportunities for the airlines as economies open up.