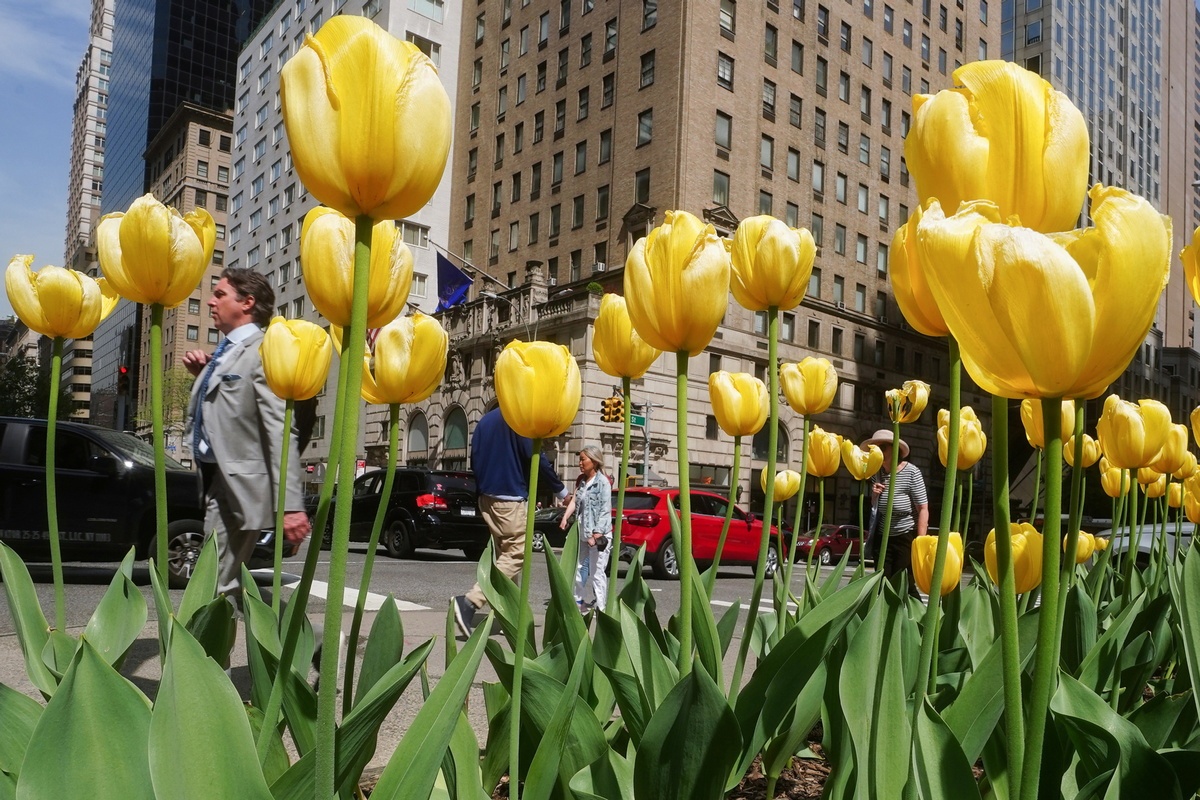 People walk past a flower bed planted in tulips in the Manhattan borough of New York City on April 28, 2021. (Photo: Agencies)

New York City, which was the epicenter of the COVID-19 pandemic in the US more than one year ago, will "fully reopen" for business on July 1, Mayor Bill de Blasio said Thursday.

"We are ready for stores to open, for businesses to open," de Blasio said on a morning television show. Restaurants, gyms, shops, hair salons and arenas will open at full capacity, he said.

The mayor said that Broadway shows might take more time because they had been aiming for a September return, but that "some of the smaller, more intimate shows, we might be looking more like July, August, and we'll move heaven and earth to help them get that done."

At a news conference later, the mayor added that he wanted the subways, which currently shut down for two hours overnight for cleaning and disinfecting, to again run 24 hours by July.

He said he expects at least 400,000 jobs lost to the pandemic to return by year's end.

Most of the restrictions placed on the city during the pandemic have been set by Governor Andrew Cuomo and the state, and de Blasio doesn't have the authority to lift them. The mayor said Thursday that he hadn't spoken to Cuomo about his reopening plan, but the city will work with the state and federal government on plans to re-open.

At his own news conference on Thursday following the mayor's announcement, Cuomo said that the state was in charge of managing the reopening and dismissed the July 1 plan of his political nemesis de Blasio, calling such projections "irresponsible".

The governor said that he hoped the city could open even before July, but that the "statewide management system" is determined "by the science, by the data".

The mayor cited the city's vaccination rate as crucial to reopening. As of Wednesday, more than 6 million doses of COVID-19 vaccines had been administered in the city, and about 36 percent of the adult population is fully vaccinated, according to city data.

He acknowledged the threat of new variants but said vaccines are proving very capable of stopping new outbreaks from those recently identified strains of the coronavirus.

Public health officials say that by July, if the city stays on its current trajectory, the number of new coronavirus cases could drop to below 600 cases a day, perhaps lower.

The mayor said that after June, the city will assess if measures like mandatory mask-wearing are still necessary, and the city will use data and science to determine any other preventive measures that may stay in place once capacity limits are lifted.

The first shutdown of the city began in March 2020, when it became the US epicenter in the early days of the pandemic. As of Wednesday, New York City has recorded 923,953 coronavirus cases and 32,461 virus-related deaths, according to the city's health department.