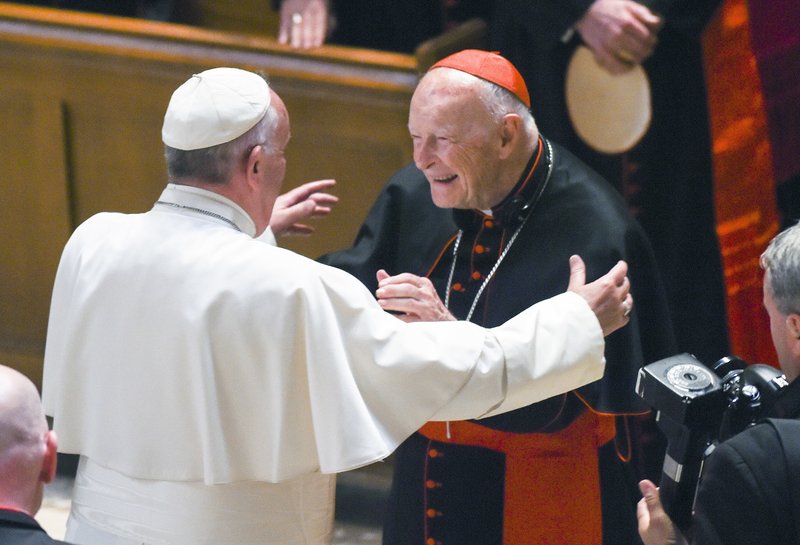 A Virginia man who says he was sexually abused for decades by Theodore McCarrick said Saturday that he’s pleased by news that Pope Francis accepted the cardinal’s resignation.

The man, who agreed to be identified only by his first name, James, said the abuse began when he was just 11 years old and continued into adulthood. He tells The Associated Press that he hopes McCarrick’s resignation would help other victims “become free.”

McCarrick has denied the allegations of abuse. James, who recently filed a police report, said “truth always prevails.” The AP generally doesn’t identify people who say they’ve been sexually abused; James asked to be called by his first name only in order to protect his family’s privacy.

James says he’s thankful that “everybody in today’s world is more understanding of the harm done by individual priests, and now we can start to heal.”

The Texas prelate who heads the US bishops’ conference is thanking Pope Francis for accepting Cardinal Theodore McCarrick’s resignation amid a sex abuse scandal.

Cardinal Daniel N. DiNardo said in a statement Saturday: “I thank the Holy Father for his leadership in taking this important step.”

The Vatican said Francis had received McCarrick’s offer to leave the College of Cardinals on Friday.

DiNardo, archbishop of Galveston-Houston and president of the United States Conference of Catholic Bishops, noted that Francis also ordered the former Washington D.C. archbishop to “observe a life of prayer and penance in seclusion” until a church trial is held.

DiNardo said Francis was prioritizing “the need for protection and care for all our people” and aware of how “failures in this area affect the life of the church in the United States.”

In a move described as unprecedented, Pope Francis has stripped US prelate Theodore McCarrick of his title of cardinal following allegations of sexual abuse, including one involving an 11-year-old boy.

The Vatican announced on Saturday that Francis ordered McCarrick to conduct a “life of prayer and penance” even before a church trial is held.

Breaking with past practice, Francis decided to act swiftly in the case of the emeritus archbishop of Washington, D.C., even before the accusations can be investigated by church officials. McCarrick was previously one of the highest, most well-known Catholic church officials in the United States and was heavily involved in the church’s response there to allegations of priestly abuse.

The pope has ordered McCarrick’s “suspension from the exercise of any public ministry ... for a life of prayer and penance until the accusations made against him are examined in a regular canonical trial.”

Among the boys McCarrick allegedly abused was a child he had baptized shortly after he was ordained a priest.

Pope Francis received Theodore McCarrick’s letter of resignation Friday evening, after recent weeks brought a spate of allegations that the 88-year-old prelate had for years sexually abused boys and had sexual misconduct with seminarians. The McCarrick case posed a test of the pontiff’s recently declared resolve to battle what he called a “culture of cover-up” of similar abuses in the Catholic church’s hierarchy.

The Vatican didn’t say where McCarrick would be confined nor when a church trial might begin. The order suspending him from public ministry effectively approved a measure already taken against McCarrick since last month.

A Catholic University canon law expert, Kurt Martens, noted this was the first time an order of penance and prayer had been issued before a church trial takes place.

The pope appears to “understand the gravity of the situation and further harm to the Catholic church’s status,” he said in a telephone interview.