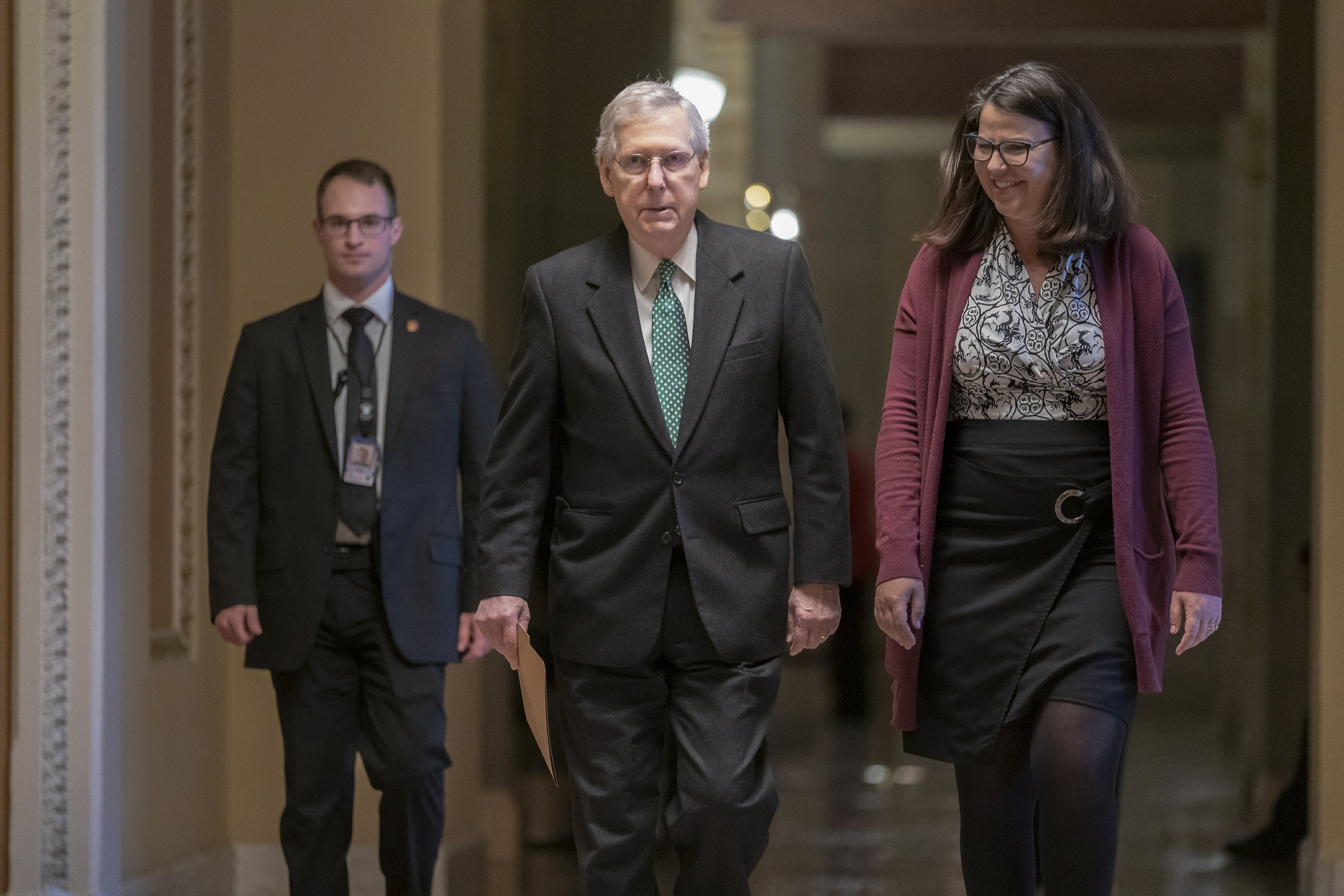 Senate Majority Leader Mitch McConnell, R-Ky, walks to the chamber on the morning after House and Senate negotiators worked out a border security compromise hoping to avoid another government shutdown, at the Capitol in in Washington, Tuesday, Feb. 12, 2019. (Photo: AP)

The Senate will vote on the Green New Deal, a moonshot plan by Democrats to combat climate change, Senate Majority Leader Mitch McConnell said Tuesday, announcing a move designed to force Senate Democrats — including a cast of presidential candidates — into a political bind.

The plan, initially championed by freshman Rep. Alexandria Ocasio-Cortez, calls for a New Deal-style mobilization to shift the US economy away from fossil fuels such as oil and coal and replace them with renewable sources such as wind and solar power. Republicans have mocked it a progressive pipedream that would drive the economy off a cliff and lead to a huge tax increase, calling it evidence of the creep of “socialism” in the party.

The upcoming vote — which has not yet been scheduled — will “give everybody an opportunity to go on record,” McConnell said.

The vote could be a moment of truth for several Democratic presidential candidates. The document is one of the first high-profile attempts at policymaking from the newly empowered liberal wing of the party. It drew swift praise from several 2020 contenders angling for support from the party’s base. The Senate vote will test how far left those candidates are willing to go, risking leaving moderate voters behind.

Republicans see it — and its rocky rollout promoting elements of the proposal later rescinded — as a political opening.

President Donald Trump slammed the Green New Deal at a rally Monday in El Paso, Texas, saying it would “shut down American energy.” It sounds like “a high-school term paper that got a low mark,” he said.

Trump has frequently expressed doubt about climate change and said he does not believe action is needed to reduce greenhouse gas emissions that contribute to global warming. His administration has focused on US “energy dominance” and increased production of oil, gas and coal on federal and private land.

But a seventh potential candidate in 2020, Ohio Democratic Sen. Sherrod Brown, pointedly declined Tuesday to attach his name and dismissed liberal activists’ contention that he has to support the Green New Deal in order to prove his commitment to the issue.

Asked about the proposal Tuesday, Klobuchar said she was a supporter of the broad idea, but kept some distance from the details.

“I see it as aspirational,” she said on Fox News. “I see it as a jumpstart. So I would vote yes, but I would also — if it got down to the nitty-gritty of an actual legislation as opposed to, ‘oh here’s some goals we have,’ that would be different for me.”

Spearheaded by Ocasio-Cortez, of New York, and Democratic Sen. Ed Markey of Massachusetts, the proposal calls for dramatic steps to virtually eliminate US greenhouse gas emissions by 2030. The nonbinding resolution sets a goal to meet “100 percent of the power demand in the United States through clean, renewable and zero-emission energy sources,” including nuclear power.

The plan goes far beyond energy to urge national health care coverage and job guarantees, as well as high-quality education, affordable housing and a high-speed rail network. The ambitious proposal met a reality check Tuesday as California Gov. Gavin Newsom declared there “isn’t a path” for completing a high-speed rail line between Los Angeles and San Francisco — although Newsom’s office said later that he isn’t walking away from the project.

It also calls for upgrading all existing buildings in the United States to be energy-efficient.

Problems in the Democratic rollout of the proposal have further fueled the Republican attacks.

Trump, at his rally Monday night, said that under the Green New Deal, “You’re not allowed to own cows anymore.” He added that the plan would “shut down American energy” and “a little thing called air travel.”

The resolution submitted to the House and Senate makes no mention of cows or air travel. But Trump’s comments referred to a fact sheet of “Frequently Asked Questions” distributed by Ocasio-Cortez’s office prior to a news conference last week. Ocasio-Cortez has subsequently described the fact sheet, which has been deleted from her website, as a “draft.”

The earlier version of the fact sheet described measures far beyond those contained in the actual plan, such as “Build out high-speed rail at a scale where air travel stops becoming necessary.” And it made the impolitic statement, “We set a goal to get to net-zero, rather than zero emissions, in 10 years because we aren’t sure that we’ll be able to fully get rid of farting cows and airplanes that fast.”

Corbin Trent, a spokesman for Ocasio-Cortez, said the quip about cows and airplanes was meant to be ironic, but Trump and other Republicans seized on it as an example of the plan’s excesses.

“Along with abolishing farting cows, beefing up high-speed rail so that airplanes can be banned is a key element in the proposal,” the National Republican Congressional Committee said Tuesday.

The forthcoming vote isn’t the first time Senate Republicans forced Democratic presidential hopefuls to go on the record about a liberal proposal they believe will alienate moderate voters later. The GOP-controlled Senate scheduled a symbolic vote on single-payer health care legislation in 2017, a decision also designed to put Democrats on the spot, and in January brought up foreign policy legislation that took on the boycott movement against Israel.

The vote on the health care legislation didn’t quite carry the punch Republicans had hoped. Rather than expose of rift in the party, 43 Democrats decided to vote “present” as a show of frustration with the politically motivated maneuver.

Trent, the spokesman for Ocasio-Cortez, predicted the Green New Deal gambit would backfire on Republicans.

McConnell and the GOP “are terrified of this winning vision of a just and prosperous future,” he said, adding that McConnell “thinks he can end all debate on the Green New Deal now and stop this freight train of momentum. Unfortunately for Mitch, all he’s going to do is show just how out of touch Republican politicians are with the American people.”