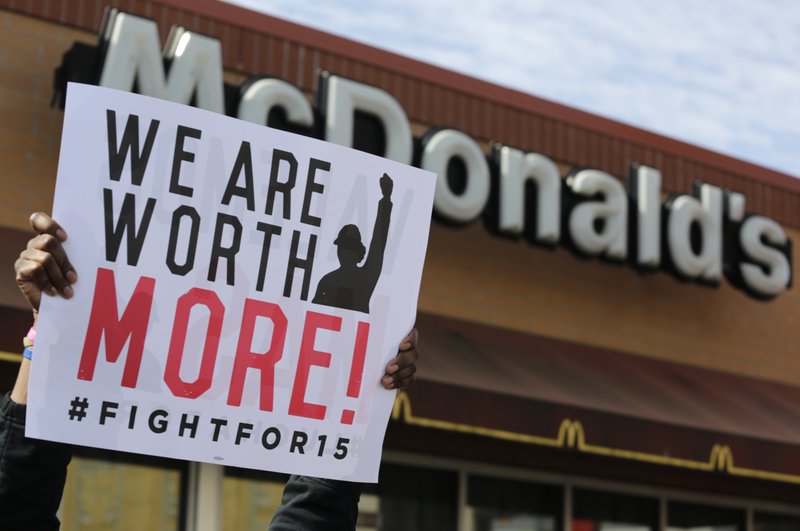 Energized by the #MeToo movement, two national advocacy groups are teaming up to lodge sexual harassment complaints against McDonald’s on behalf of 10 women who have worked at the fast food restaurant in nine cities.

The workers — one of them a 15-year-old from St. Louis — alleged groping, propositions for sex, indecent exposure and lewd comments by supervisors. According to their complaints, when the women reported the harassment, they were ignored or mocked, and in some cases suffered retaliation.

The legal effort was organized by Fight for $15, which campaigns to raise pay for low-wage workers. The legal costs are being covered by the TIMES UP Legal Defense Fund, which was launched in January by the National Women’s Law Center to provide attorneys for women who cannot afford to bring cases on their own.

The complaints, filed with the US Equal Employment Opportunity Commission, are being announced on Tuesday, two days ahead of the company’s annual shareholder meeting in Oak Brook, Illinois.

Responding to the claims, McDonald’s spokeswoman Terri Hickey said there is “no place for harassment and discrimination of any kind” in the workplace.

“McDonald’s Corporation takes allegations of sexual harassment very seriously and are confident our independent franchisees who own and operate approximately 90 percent of our 14,000 US restaurants will do the same,” Hickey said by email.

Fight for $15 said the restaurants named in the complaints are run by franchisees, not directly by McDonald’s. But the complaints name both McDonald’s Corp. and the franchisee — part of Fight for $15′s effort to hold the company responsible for wage and employment issues at franchised locations. The company claims its franchisees are independent business owners, and that stance has complicated efforts to unionize workers across the entire McDonald’s chain.

When similar sexual harassment charges were lodged by Fight for $15 workers two years ago, McDonald’s promised a review of those allegations. However, Hickey — in her new response — declined to say whether that review led to any changes of policies and practices aimed at curtailing such harassment.

Among the new complainants is Tanya Harrell, 22, of New Orleans, who alleges that her two managers teased her, but otherwise took no action after she told them of sustained verbal and physical harassment by a co-worker.

Harrell, who makes $8.15 an hour, says going public with her complaint may be emotionally taxing, but she is proud of her decision.

“I feel like I have a voice now,” she said in a telephone interview. “It gives me a bit of motivation and a bit of courage.”

The new allegations come almost two years after 15 McDonald’s workers in Fight for $15 filed a series of sexual harassment complaints against the company. Attorneys for the workers plan to ask the EEOC to consolidate or coordinate the newly filed charges, as well as some of the 2016 charges that remain pending.

What is different this time, organizers say, is that all of the women bringing charges are represented by attorneys due to the defense fund’s support. More broadly, the #MeToo movement that exploded last October has emboldened more women to speak out and has prompted some employers to alter their approach to harassment, said National Women’s Law Center CEO Fatima Goss Graves.

“Most companies have a policy saying no sexual harassment, but how do you make that work?” she asked. “Right now, because of the huge power disparities, it’s easy to just wait out the complaints and nothing really changes.”

Eve Cervantez, a lawyer with the San Francisco-based public interest law firm Altshuler Berzon, is working on the new complaints. She says they represent an effort to extend the power of #MeToo to low-wage women whose predicaments have not drawn as much attention as harassment victims in Hollywood, the media and other sectors.

The women filing charges “want McDonald’s to take sexual harassment seriously and enforce its already existing zero tolerance policy,” Cervantez said. “We think McDonald’s can use its power and influence to guarantee a safer workplace for all its employees’”

US Rep. Jan Schakowsky, a Democrat whose Chicago-area district lies just north of McDonald’s headquarters, praised the women filing the complaints for their courage and urged McDonald’s to take “immediate action” to ensure its workforce is treated with respect.

Fight for $15 is calling on the company to hold mandatory trainings about sexual harassment for managers and employees and to create a safe, effective system for receiving and responding to complaints. As part of the initiative, Fight for $15 said it is establishing a hotline that workers can use to have their complaints reviewed by attorneys.

Activists say sexual harassment is pervasive in the fast food industry. They cite a 2016 survey by Hart Research Associates — conducted for three advocacy groups — which calculated that 40 percent of female fast food workers experience unwanted sexual behavior on the job.