Meatless products hit stride in US 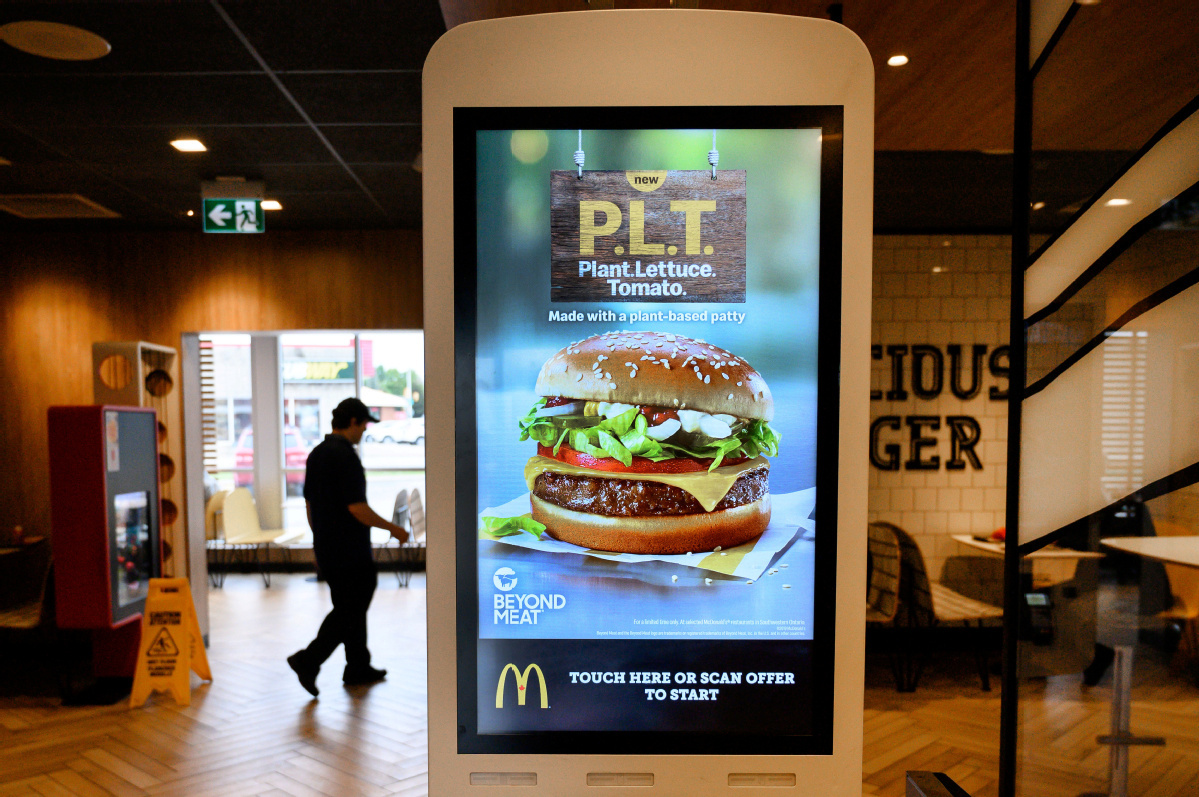 A sign promoting McDonald's "PLT" burger with a Beyond Meat plant-based patty is seen at a test restaurant in North America in October, 2019. (Photo: Agencies)

Consumers in the United States have increasingly turned to plant-based meat substitutes since the pandemic, and now some of the biggest fast-food chains in the country like McDonald's will be selling those goods as well.

The popular plant-based alternative meat company Beyond Meat signed a new partnership with McDonald's last week, a vital step in the growing shift to take meat alternatives into the dining mainstream in the country.

The company will be the preferred supplier for a new plant-based burger dubbed the "McPlant" and work with McDonald's to develop new substitutes for pork, chicken and egg.

He said the partnership with the plant-based meat producer is driven by consumer demand for more diverse protein options.

"These deals are enormous," Ethan Brown, Beyond Meat's chief executive and founder, told CNBC. "They are the biggest deals you could possibly put together in food in our sector."

The global meat substitutes sector is worth $20.7 billion and is set to grow to $23.2 billion by 2024, market research company Euromonitor told CNBC. That growth is driven by concerns ranging from animal welfare to food security and the COVID-19 pandemic.

Sales of plant-based foods in the US increased by 90 percent during the height of pandemic-buying in mid-March, compared with last year's sales over the same time period. Sales of plant-based meat spiked by 148 percent, a report last year by market research company SPINS said.

About a third of consumers said their consumption of various meat alternatives has increased in the past year, said a separate survey in January by market research company Datassential.

The figures are similar for those who say they plan to increase their consumption of plant-based meat alternatives in the coming year, said another report released in February by business news publisher SmartBrief.

Beyond Meat was founded in 2009. It processes yellow pea protein, canola oil, potato starch and other ingredients to produce patties and sausages meant to mimic the taste, appearance and feel of traditional meat.

White Castle was the first quick-serve hamburger chain to partner with Impossible Foods, another meat-alternative front-runner. It rolled out its plant-based sliders nationwide in 2018.

The meat alternative industry though still has hurdles to overcome in different parts of the world.

The plant-based meat market in Asia may be limited by perception issues because vegetarian meat was primarily eaten by followers of Buddhism in China, Elaine Siu, managing director of The Good Food Institute Asia Pacific, told CNBC.

Cattle farmers also stand in the way of the growth of the plant-based dairy market. The US Cattlemen's Association in 2018 filed a petition requesting an official definition of the words "beef" and "meat", to keep plant-based proteins out of the description.

European Union lawmakers rejected such proposals in October and allowed restaurants and shops to label plant-based products with words such as "sausage" or "burger".