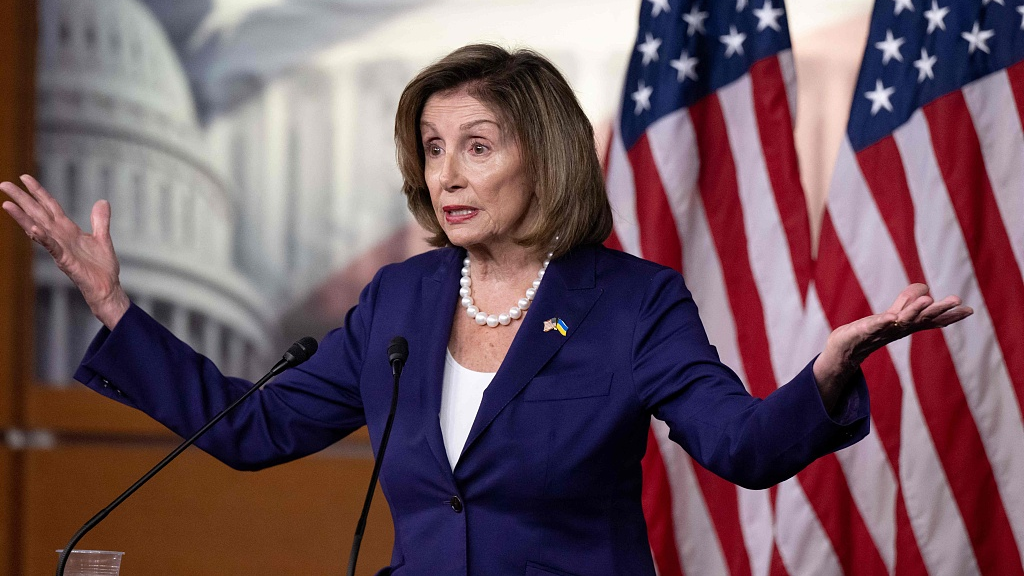 A slew of media columnists and opinion writers for major international outlets have warned of the risk should U.S. House Speaker Nancy Pelosi proceed with a visit to China's Taiwan region, with some criticizing the 82-year-old Democrat as "irresponsible."

Pelosi made the first stop of her high-profile Asia tour in Singapore on Monday. She is also expected to visit Malaysia, Japan and the Republic of Korea, but potentially included in the trip is a stopover in Taiwan, which she reportedly planned despite President Joe Biden telling reporters "the military thinks it's not a good idea right now."

An itinerary released on Sunday by Pelosi's office revealed travel details of her trip, but did not mention the Chinese region.

With headlines ranging from "Nancy Pelosi's trip to Taiwan is too dangerous" to "Does the US really want to test China's resolve with a Taiwan trip by Pelosi?," political observers have given lucid analysis of what the potential fallout and the provocative nature of the possible visit.

Pelosi should delay "any visit to Taiwan to give the Biden administration time to articulate a clear and consistent policy toward the island. This is critical not only so that China understands the U.S. stance, but so that the American people are clear too," Bonnie S. Glaser, director of the Asia program at the German Marshall Fund of the United States, and Zack Cooper, a senior fellow at the American Enterprise Institute, wrote in an op-ed published by the New York Times.

The U.S. has long maintained its "strategic ambiguity" by adhering to the one-China policy, but such an approach "has given way to strategic confusion. President Biden's misstatements on Taiwan are undermining the carefully devised policy that has kept the peace for decades," they wrote.

News of the potential trip "has given rise to worries of a dangerous new crisis brewing over the Taiwan Straits," Wang Xiangwei, a South China Morning Post columnist, wrote on Saturday.

"It would be a grave mistake if they dismiss China's warnings merely as 'empty threats,'" he added.

Some commentators went on to blast Pelosi for a potential abuse of her position as the House speaker.

Edward Luce, the U.S. national editor for the Financial Times, wrote on July 22 that Pelosi "is second in succession to the U.S. presidency and belongs to the same party as the president. Protestations of U.S. constitutional niceties – that Congress is separate to the executive – ring hollow in this context."

"Pelosi may think she is acting on principle. She is in fact exhibiting the exorbitant irresponsibility of the U.S. legislator – power without responsibility; the self-indulgence of a figure whose job it has never been to pick up the geopolitical pieces," Luce wrote.

Other observers shifted their focus away from the visit itself, delving into the broader topic of China-U.S. ties.

"The main point is not in Pelosi coming to Taiwan, but it's to look at how the U.S. and China effectively control the risks that may arise," Arthur Zhin-Sheng Wang, a defense studies expert at Taiwan's Central Police University, told the Washington Post.

Wang referred to Thursday's phone call between Chinese President Xi Jinping and his U.S. counterpart Joe Biden, saying it exemplified a "basic level of mutual understanding" between the two sides.