WORLD Medics around the world face hostility over virus stigma

Medics around the world face hostility over virus stigma 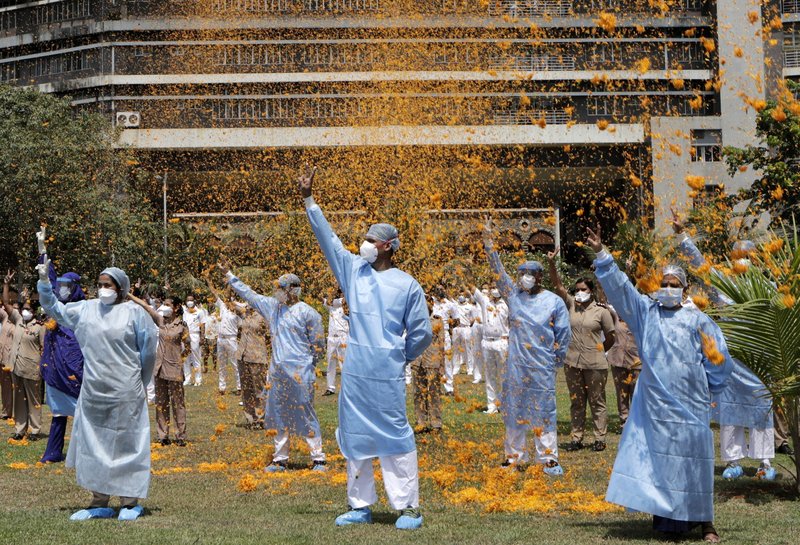 An Indian Air Force helicopter showers flower petals on the staff of INS Asvini hospital in Mumbai, India as part of Armed Forces' efforts to thank the workers, including doctors, nurses and police personnel, who have been at the forefront of the country's battle against the COVID-19 pandemic. (Photo: AP)

Dr. Dina Abdel-Salam watched in terror last month as scores of strangers gathered under the balcony of her aunt’s empty apartment in the Egyptian city of Ismailia, where she’d temporarily sheltered after leaving her elderly parents at home to protect them from exposure to the coronavirus.

The crowd called out her name, hurling threats until she dialed the police for help.

“You have moved here to make us sick,” someone shouted.

Abdel-Salam’s ordeal is just one of many in a wave of assaults on doctors, illustrating how public fear and rage can turn against the very people risking their lives to save patients in the pandemic.

While many cities across the world erupt at sundown with collective cheers to thank front-line workers for treating COVID-19 patients, in Egypt, India, the Philippines, Mexico and elsewhere, some doctors and nurses have come under attack, intimidated and treated like pariahs because of their work.

The pandemic, especially in places with limited healthcare infrastructure, has already subjected doctors to hardships. But medical workers, seen as possible sources of contagion, face another staggering challenge in these countries: the stigma associated with the illness.

“Now more than ever, we need to recognize the importance of investing in our health workforce and take concrete actions that guarantee their well-being and safety,” Ahmed al-Mandhari, the World Health Organization’s regional director for the Eastern Mediterranean, said in a virtual news conference earlier this week.

But in many places, that’s a difficult task as mistrust, fear and misinformation can have devastating effects. Decades of poor education and scant government services in some places have created deep misgivings about the medical profession.

In central India, a group of five health workers, dressed in full protective suits, entered a neighborhood to quarantine contacts of a confirmed COVID-19 patient when a mob descended, slinging stones and screaming insults.

“Some people felt that the doctors and nurses will come and take their blood,” said Laxmi Narayan Sharma, the health union president in Madhya Pradesh, in central India.

In the southern Indian city of Chennai, another stone-throwing mob broke up a funeral for Simon Hercules, a neurologist who died from COVID-19, pelting the ambulance carrying his remains and forcing his family and friends to run for their lives.

In Afghanistan, conspiracy theories undermine the credibility of medical professionals. Nearly 19 years after the US-led coalition defeated the Taliban, many blame Western nations for the country’s deterioration. One commonly shared conspiracy theory is that the virus was allegedly manufactured by the US and China to reduce the world population, said Sayed Massi Noori, a doctor at one of two Kabul hospitals testing for coronavirus.

Last week, several physicians at the emergency unit of the Afghan Japan Hospital, where Noori works, were mobbed by 15 family members of a patient who died of the virus. The doctors had their noses bloodied.

“The relatives believe it is the doctors who killed their family members,” Noori said.

The coronavirus hotline in Ouagadougou, the capital of war-torn Burkina Faso, fields calls about persistent coughs and headaches. But it has also gotten death threats.

“They call and say that after they’re finished killing the soldiers in the north, they’re going to come and kill everyone here,” said Red Cross volunteer Emmanual Drabo.

Health workers across the Philippines have been attacked and targeted more than 100 times since mid-March, resulting in 39 arrests, police Lt. Gen. Guillermo Eleazar told The Associated Press. In one attack, five men stopped a nurse heading to work in the Sultan Kudarat province in late March, throwing liquid bleach into his face and burning his eyes.

Tough-talking President Rodrigo Duterte, long censured for his violent approach to curbing crime, responded: “I told the police, maybe it’s illegal but I’ll answer for it. Pour it back on the attackers of doctors and nurses.”

In Guadalajara, Mexico’s second-largest city, doctors and nurses say just venturing out in scrubs invites danger. One city hospital instructed its workers to shed their uniforms when they clock out, and the government has assigned National Guard troops to public hospitals.

Similar fears have sparked arrests in Sudan. In Omdurman, across the Nile River from the capital, Khartoum, a riot erupted at a hospital when the rumor spread it would take COVID-19 patients. Police arrested several people who tried to attack the building, said hospital director Babaker Youssef.

In Egypt, even hospital administrators have faced public anger.

Ahmed Abbas, the vice president of a government hospital in Egypt’s Nile Delta city of Zagazig, was wearing scrubs when he was jostled and cursed while waiting in line at an ATM. The head of Egypt’s Doctors’ Union, Ihab el-Taher, says such incidents are “limited” but still disheartening.

On top of a global shortage of respirators, virus testing, and protective equipment, increased public hostility has deprived some medical professionals of basic needs — such as housing and transportation.

In India’s capital, New Delhi, doctors and first responders reported being evicted by their landlords. A nurse in Ethiopia said taxis refuse to pick up workers coming out of the nation’s main hospital dedicated to coronavirus patients.

After police dispersed the mob beneath her balcony in Ismailia, some people came back to apologize, Abdel-Salam said. In India, two of the doctors pelted with stones in Madhya Pradesh were cheered when they returned with gifts of saplings a day later, after health officials had explained the purpose of their visit.

After the aborted burial of Dr. Hercules in southern India, one of his colleagues had to pick shards of glass off his shrouded body. Another colleague, Pradeep Kumar, gathered two hospital workers and returned under the cover of night to cover the dug-out grave with dirt.

“We had to literally use our hands,” Kumar said. “This man deserved something better than that.”