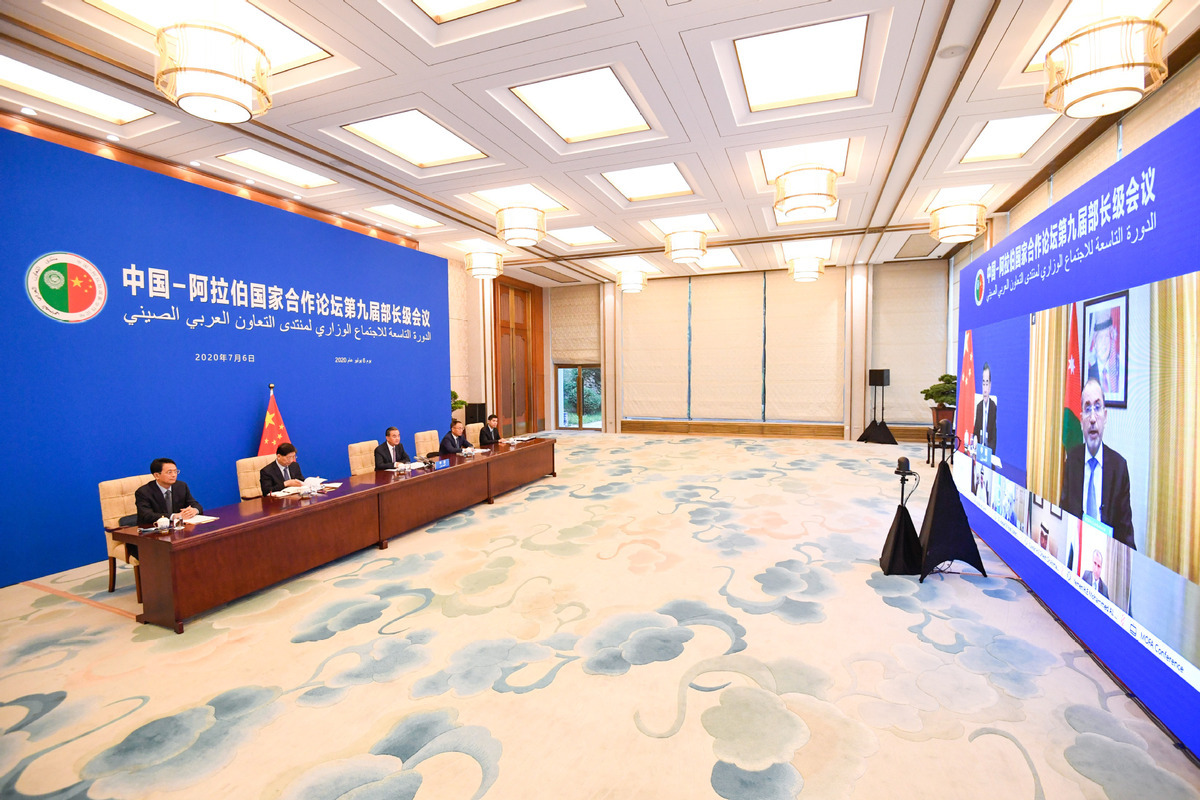 The 9th ministerial meeting of the China-Arab States Cooperation Forum is held via video link on July 6, 2020. (Photo: Xinhua)

The COVID-19 pandemic has brought China and Arab nations much closer together through the China-Arab States Cooperation Forum and the mechanism of political parties' dialogue as they take concrete steps to build a China-Arab community with a shared future, officials and experts said.

The ninth ministerial meeting of the forum, held on Monday via video link, rolled out specific steps for China and Arab nations to strengthen their strategic partnership toward the building of a community with a shared future in the new era.

The meeting, co-chaired by State Councilor and Foreign Minister Wang Yi and Jordanian Minister of Foreign Affairs and Expatriates Ayman Safadi, generated three documents as its outcomes－a joint statement of China and Arab nations in solidarity and cooperation against COVID-19, the Amman Declaration demonstrating countries' mutual support for each other's core interests and their determination to build a community with a shared future, and an action plan for their practical cooperation under the framework of the forum between 2020 and 2022.

China and Arab states agreed to hold the China-Arab summit as part of efforts to enhance the level of their relationship, Wang Di, director-general of the Foreign Ministry's Department of West Asian and North African Affairs, said after the meeting.

Saudi Arabia expressed willingness to convene the summit at a time to be agreed, Wang Di said.

"The decision to host such a summit is in itself a testament to the strong determination of both sides to elevate our strategic partnership and deepen cooperation across the board," he added.

Foreign ministers of League of Arab States members and the league's Secretary-General Ahmed Aboul Gheit attended the meeting. President Xi Jinping, who has attached great importance to developing cooperation with Arab nations, sent a congratulatory message to the meeting expressing hope that China and Arab states can enhance strategic communication, coordination and pragmatic cooperation, and make more substantial and practical efforts in building the China-Arab community with a shared future.

The forum, founded in 2004, has facilitated China's cooperation and communication with Arab countries. The ministerial meeting is the permanent mechanism of the forum and is convened every two years, with the option for extraordinary sessions if necessary.

During the eighth ministerial meeting of the forum held in Beijing in 2018, Xi announced the establishment of the China-Arab future-oriented strategic partnership of comprehensive cooperation and common development.

Since then, the two sides have intensified their mutually beneficial cooperation in various fields, particularly under the framework of the Belt and Road Initiative.

Wang Di said that at Monday's meeting the vision of building a China-Arab community with a shared future in the new era was written into the Amman Declaration as the consensus of China and Arab nations.

Two weeks ago, an extraordinary meeting of the Dialogue between the Communist Party of China and Political Parties of Arab Countries was held via video link. More than 60 leaders of major political parties from Arab nations attended the meeting. Xi, who is also general secretary of the CPC Central Committee, sent a congratulatory message to the meeting.

He said in the message that during the COVID-19 pandemic, China and Arab countries have rendered each other assistance and support, adding a new chapter to the effort of building a community with a shared future for China and Arab nations.

When China was at a trying time in its own fight against COVID-19, Arab countries showed solidarity with China by voicing support and donating medical supplies. Some famous landmarks, including ancient temples in Egypt and the Burj Khalifa in the United Arab Emirates, were lit up in the colors of China's national flag.

As the pandemic started to rage in Arab nations, China delivered much-needed supplies and shared its experience combating the disease via video conferences with medical workers from 21 Arab countries and sent medical experts to eight Arab nations.

In its latest medical aid, the Chinese government delivered supplies to the League of Arab States in Cairo, Egypt, on Sunday. Hossam Zaki, assistant secretary-general of league, said the donation "reflects the depth of cooperation and friendship between the Arab League and China, especially in the light of the current circumstances and challenges the world faces", Xinhua News Agency reported.

Analysts said the joint fight against COVID-19 and the unswerving efforts in promoting cooperation in various fields have laid a solid foundation for building a China-Arab community with a shared future.

Nasser Bouchiba, president of the Africa-China Cooperation Association for Development in Morocco, said the joint fight against COVID-19 has given a new meaning to the China-Arab community with a shared future, and mutual help through the hard times will bring China and Arab nations closer.

China and Arab states are developing countries and face the arduous tasks of economic development and social stability, Bouchiba said, and the vision of building a China-Arab community with a shared future demonstrates China's sincerity and willingness to strengthen cooperation with Arab countries as well as their pursuit of shared, cooperative development and mutual support.

During Monday's meeting, countries also reiterated their commitment to stepping up joint construction of the Belt and Road, and agreed on 107 items of cooperation in 20 areas including politics, the economy, energy, industrial capacity, health, science and technology, which will be carried out in the next two years.

Nineteen Arab countries have signed cooperation documents with China on joint building of the Belt and Road.