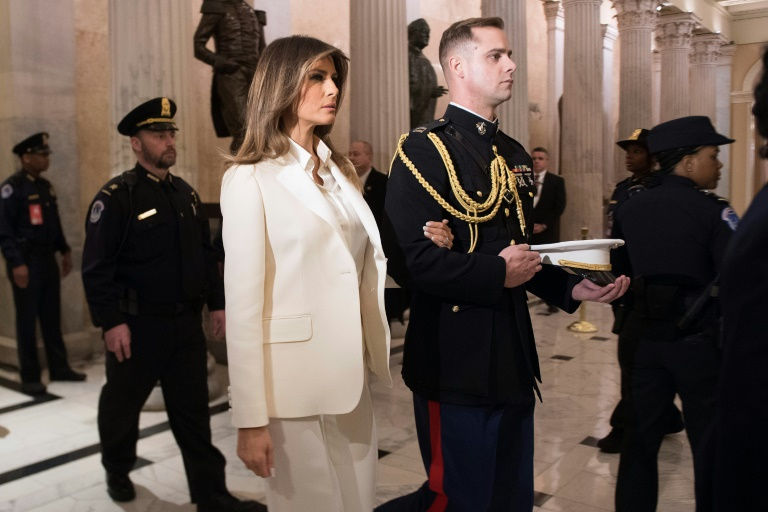 First Lady Melania Trump made a very visible return to the public stage Tuesday by attending her husband's maiden State of the Union address, her first official appearance since accusations of infidelity surfaced about the president.

The enigmatic wife of Donald Trump emerged publicly for the first time since she fed the Washington rumor mill by cancelling her trip to Davos, Switzerland, leaving her husband to attend last week's World Economic Forum on his own.

But for Trump's big night in Congress, Melania arrived smiling and waving, to warm and extended applause -- dressed in a crisp cream white pantsuit that stood in contrast to the black donned by Democratic lawmakers in solidarity with the victims of sexual harassment.

Minutes later, her husband took the floor and exchanged waves with his wife.

Among Trumps' guests in the first lady's box were a US Marine corporal who stepped on an explosive device and lost both legs while deployed in Iraq in 2007; first responders who helped save hurricane victims in Louisiana and Texas, and parents of children killed by the gang MS-13.

Breaking with tradition, the first couple arrived separately to the Capitol, because, according to the first lady's spokesperson Stephanie Grisham, she was accompanying guests.

Afterwards, the first lady was seen being escorted out of the gallery by a military officer, as Trump spoke with lawmakers and administration officials on the House floor.

It was not immediately clear whether the Trumps returned together to the White House. 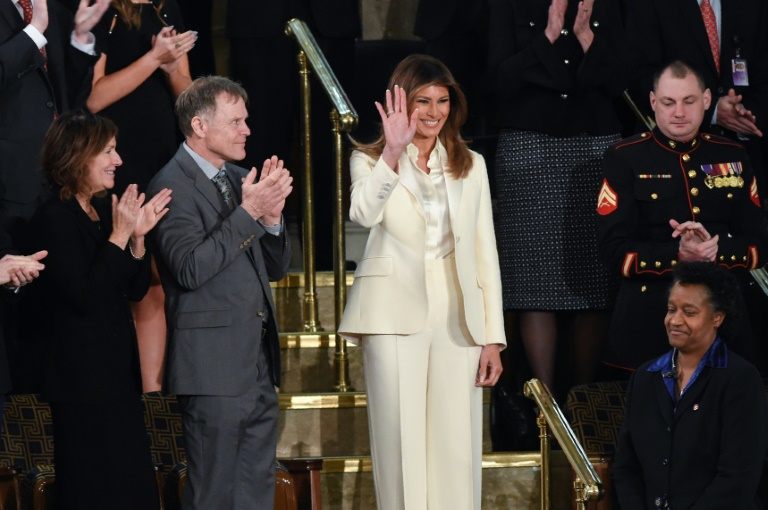 As the 47-year-old wife of a 71-year-old man known for past lewd remarks about women, and whose two past divorces became public spectacles, Melania Trump is dogged by speculation that they lead largely separate lives.

Speculation flared anew when The Wall Street Journal reported on January 12 that Trump had paid Daniels $130,000, one month before the November 2016 election, to keep their adulterous liaison quiet.

But Daniels, reportedly bound by the non-disclosure agreement about the alleged fling, revealed little -- laughing awkwardly, flashing tight-lipped smiles and deflecting Kimmel's questions at every chance.

"I thought this was a talk show, not a horror movie," she said as Kimmel read from the transcript of a 2011 In Touch magazine interview, only recently published and reportedly about the liaison.

As for Melania, her opinions and goals have remained a mystery to millions of Americans.

She is a former model who once posed nude in her husband's private jet, and the first foreign-born wife of a US president in nearly 200 years.

She spent her first months as first lady living in New York, and refused to move to the White House until their young son Barron finished the school year.

She makes few public speeches, and is rarely seen in Washington.