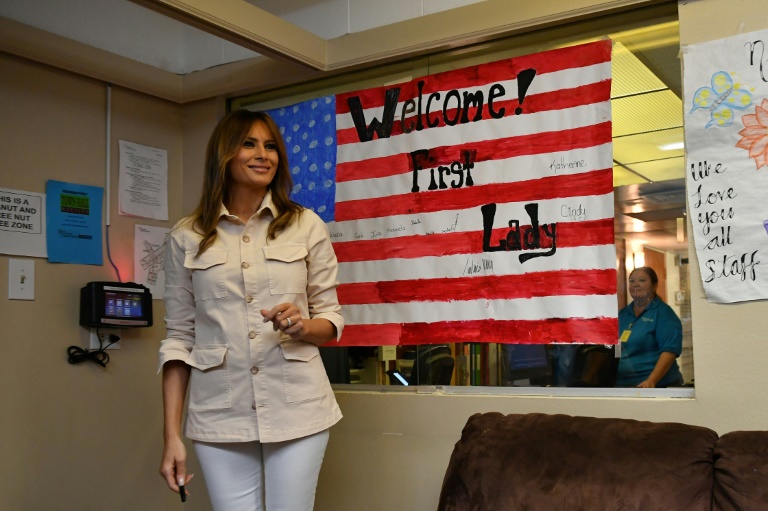 US First Lady Melania Trump dived headlong into the ongoing migrant family separation crisis by traveling to Texas, along the border with Mexico, to visit a children's shelter and border processing center.(Photo: AFP)

Melania Trump made a surprise trip to the US-Mexican border on Thursday as her husband's administration seeks to quell a firestorm over migrant family separations, while Republican lawmakers were forced to delay a high-stakes vote on the crisis.

While President Donald Trump's administration struggled to formulate next steps, the Pentagon signaled officials were bracing for a lengthy ordeal. The military said it will prepare to house up to 20,000 unaccompanied migrant children on its bases.

The first lady's unannounced visit came a day after the president -- in a stunning about-face -- moved to end the practice of splitting migrant families, which had prompted outrage at home and abroad.

There was, however, no immediate plan in place to reunite the more than 2,300 children already separated from their families -- igniting a fresh controversy over the conditions in which the children are living.

"I would also like to ask you how I can help these children to reunite with their families as quickly as possible."

The first lady herself had called for a political compromise to end the separations -- the result of the administration's "zero tolerance" policy launched in early May, under which illegal border crossers were systematically prosecuted and their children separated from them as a result.

Melania spent an hour-plus at the shelter, talking directly to children who spoke to her either in English or in Spanish, through a translator.

One girl said she had been at the shelter for two months. Another told Trump they were learning how to celebrate the Fourth of July.

"Usually when they get here, they're very distraught," one official said.

Melania Trump was unable to escape controversy on the trip. She boarded and exited her plane wearing a jacket which read "I really don't care. Do U?" -- a cryptic message that sent the internet ablaze.

The political compromise the first lady had sought has not materialized so far.

In Washington, lawmakers failed to advance either of two Republican immigration bills in the House of Representatives.

A hardline proposal was defeated, as expected.

But a vote on a "compromise" bill between the party's conservative and moderate wings, which ends family separations but also includes Trump priorities like curtailing legal immigration and providing some protections to young immigrants, was pushed back to Friday, and then to next week, in a sign there was no immigration consensus within the party that controls Congress.

The failure dealt an embarrassing blow to Republicans under intense pressure to take legislative steps to address the issue.

The crisis was fueling a brutal partisan scrap, with Trump blaming "extremist" Democrats for refusing to help tighten border security.

"Democrats want open Borders, where anyone can come into our Country, and stay," he tweeted.

The House's top Democrat Nancy Pelosi blasted back, accusing Republicans of making a "compromise with the Devil" instead of with Democrats, and saying they were complicit in Trump's "atrocities."

For weeks, Trump had insisted he was bound by law to split children from their parents and that only Congress could resolve the problem -- before he radically shifted gears.

Trump's executive order would keep families together but in custody indefinitely while parents are prosecuted for entering the country illegally -- a move that could lead to new legal battles for the administration.

The Justice Department moved Thursday to modify the 1997 court ruling known as the Flores Settlement, which places a 20-day limit on how long children, alone or with their parents, can be detained.

Lawmakers from both parties, as well as faith groups, families and children have recoiled at how the administration has handled the crisis.

Several clergy, parents and children wearing fake Mylar blankets like those given to minors detained at the border protested in a Senate office building, while lawmakers denounced Trump's policies on the floors of the House and Senate.

A bipartisan group of American mayors including New York's Bill de Blasio rallied outside a migrant children's shelter near El Paso, Texas to denounce a lack of transparency, and demand family reunification.

"The families are not reunified, we don't know when they'll be, we're gonna fight for that," said de Blasio, who a day earlier declared himself "shocked to learn" that a single center in Harlem had received 239 separated children without the knowledge of city authorities.

Trump insisted there was a need to sustain his "zero tolerance" policy "or our country will be overrun by people, by crime," he said.

After a downturn last year, the flow of migrants from Central America and Mexico has surged since October.

From March to May this year, more than 50,000 people a month were apprehended illegally crossing the border.

Nearly all of the arriving families have officially requested asylum, citing the high levels of violence in their home countries.