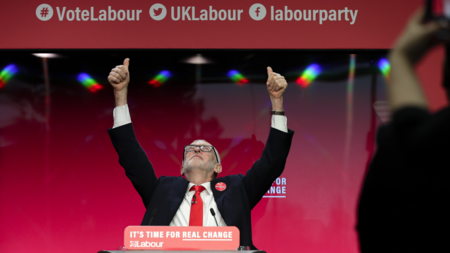 Three candidates -- Keir Starmer, Rebecca Long-Bailey and Lisa Nandy -- are all members of parliament (MPs) who qualified for the ballot after securing the most support from trade unions and other groups.

The ballot will run until April 2, with results announced on April 4 at a special Labour conference.

Starmer, 57, who represents the London constituency of Holborn and St. Pancras, is the favorite to win according to odds by various betting companies. Once a barrister specializing in human rights issues, he became an MP in 2015 and has been Labour's Brexit spokesman since October 2016.

Starmer said that he would offer jobs to his two rivals in his front bench team if he wins.

Long-Bailey, 40, who represents a Greater Manchester constituency, is Starmer's main rival. She won the backing for her leadership bid from a number of trade unions, including transport and general union Unite which represents millions of workers. She became an MP in 2015 and now serves as outgoing leader Corbyn's business spokeswoman and ally.

Nandy, 40, who also represents a Greater Manchester constituency, resigned from her post as Labour policy chief for energy in 2016 in protest against Corbyn. Before becoming an MP in 2010, she was a local councillor in London.

The party will have the first female leader in history if Long-Bailey or Nandy wins the contest.

After the election defeat, Corbyn, a veteran leftist who was elected Labour leader in 2015, was forced to step down.