WORLD Memos to Nobody: Inside the work of a neglected fed agency

Memos to Nobody: Inside the work of a neglected fed agency 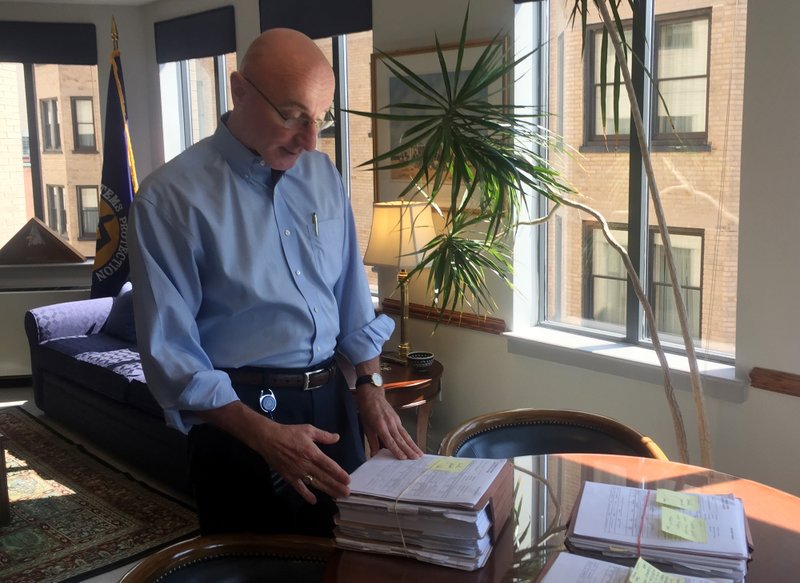 Mark Robbins gets to work at 8:15 each morning and unlocks the door to his office suite. He switches on the lights and the TV news, brews a pot of coffee and pulls out the first files of the day to review.

For the next eight hours or so, he reads through federal workplace disputes, analyzes the cases, marks them with notes and logs his legal opinions. When he’s finished, he slips the files into a cardboard box and carries them into an empty room where they will sit and wait. For nobody.

Such is the lot of the last man standing in this forgotten corner of Donald Trump’s Washington. For nearly two years, while Congress has argued and the White House has delayed, Robbins has waited to be sent some colleagues to read his work and rule on the cases. No one has arrived. So he toils in vain, writing memos into the void.

Robbins is a one-man microcosm of a current strand of government dysfunction. His office isn’t a high-profile political target. No politician has publicly pledged to slash his budget. But his agency’s work has effectively been neutered through neglect. Promising to shrink the size of government, the president has been slow to fill posts and the Republican-led Congress has struggled to win approval for nominees. The combined effect isn’t always dramatic, but it’s strikingly clear when examined up close.

“It’s a series of unfortunate events,” says Robbins, who has had plenty of time to contemplate the absurdity of his situation. Still, he doesn’t blame Trump or the government for his predicament. “There’s no one thing that created this problem that could have been fixed. It was a series of things randomly thrown together to create where we are.”

Robbins is a member of the Merit Systems Protection Board, a quasi-judicial federal body designed to determine whether civil servants have been mistreated by their employers. The three members are presidentially appointed and Senate-confirmed for staggered seven-year terms. After one member termed out in 2015 and a second did so in January 2017, both without replacements lined up, Robbins became the sole member and acting chairman. The board needs at least two members to decide cases.

That’s a problem for the federal workers and whistleblowers whose 1,000-plus grievances hang in the balance, stalled by the board’s inability to settle them. When Robbins’ term ends on March 1, the board probably will sit empty for the first time in its 40-year history.

It’s also a problem for Robbins. A new board, whenever it’s appointed and approved, will start from scratch. That means while new members can read Robbins’ notes, his thousand-plus decisions will simply vanish.

“There is zero chance, zero chance my votes will count,” the 59-year-old lawyer says, running his fingers over the spines leather-bound volumes lined up neatly on a shelf. Inside are the board’s published rulings. None of the opinions he’s working on will make it into one of them.

“Imagine having the last year and half of your work just ... disappear,” he said.

Despite the choke of files piled up everywhere else, Robbins’ office is remarkably orderly. Three paperweights rest on stacks of papers on his desk: a stone from Babel province, a memento from his time working for the State Department in Iraq; a model of the White House, to commemorate his tenure under Presidents Ronald Reagan and George W. Bush; and a medallion bearing the merit board’s seal. This job, which pays about $155,000 a year, “has been the honor of my life,” he says.

In the corner, a potted plant he rescued from a trash can outside his condo six years ago is now so tall it’s bumping up against the ceiling, growing in circles.

He swears it’s not a metaphor.

Robbins, a Republican, was excited when Trump won the election. The president chooses two board members of his or her own party, and the Senate minority leader picks a third. Robbins assumed he’d finally be in the majority after years of serving alongside Democrats, soon able to write opinions rather than just logging dissent.

Trump was in office a year before he nominated two board members, a pair of Republicans, including Robbins’ replacement. A third nominee, a Democrat, was named three months later, in June.

Assuming they’d be swiftly confirmed, Robbins quickly began preparing for their arrival, leaving customized notes with comments and suggestions for the nominees based on their distinct personalities and experience on each case.

He’d at least impart a little wisdom, he thought.

But months went by and still no vote. Robbins said he was told the Democrats were refusing to confirm the two Republicans by unanimous consent, insisting instead on a full debate for each. In late September, the Senate Homeland Security and Government Affairs subcommittee that screens nominees told Robbins it probably would not be able to confirm the appointees before the end of the current Congress. That meant that the entire process, which typically takes several months when there are no complications, will begin again come January, with no guarantee the nominees will be the same.

Now his pile of personalized sticky notes is bound for the trash, too.

Tall, slim and bald, Robbins is an eternal optimist. He sees the futility of the piles of paper and empty offices. But he’s determined to keep the trains running, even if he’s the only one on the ride.

“It’s not like I’m sitting around on the sofa watching soap operas and eating bonbons. I’m still doing my job,” he said. “It’s only when the agency stops working that people realize what we do and the value we bring.”

Frustrating? Yes. But at least it makes for a good story at parties.

“When I say to people, ‘And then my votes just disappear,’ the crowd usually goes ‘Oh, no!’” he said. “And there’s empathy, there’s real empathy.”

The board, established in 1978, is responsible for protecting 2.1 million federal employees from bias and unfair treatment in the workplace. The board handles appeals from whistleblowers and other civil servants who say they were mistreated or wrongly fired, and want to challenge an initial ruling by an administrative judge. The board also conducts independent research and writes policy papers destined for the president’s desk.

Or it used to.

Robbins is quick to point out the staffing crisis began under President Barack Obama, back when Robbins’ first colleague termed out without a replacement.

Trump has lagged slightly behind his predecessors in nominating political appointees. As of Nov. 19, he had nominated people for 929 positions, compared with Obama’s 984 and Bush’s 1,128 at the same point in their presidencies. Congress has acted on just 69 percent of those nominations, according to data provided by the Partnership for Public Service, a nonpartisan organization promoting government efficiency.

Max Stier, the partnership’s CEO, blames the administration, the Senate and a dysfunctional system of appointing and confirming political nominees.

John Palguta, former director of policy and evaluation for the merit board, called the delay “outrageous.”

“We’re setting a new standard, and it’s particularly severe and unfortunate at MSPB because of the structure of the agency. It just can’t operate. And to let it go for this long, that’s really unconscionable,” Palguta said. “The administration simply hasn’t done its job.”

Sen. James Lankford, who chairs the Senate Home Security and Government Affairs’ Subcommittee on Regulatory Affairs and Federal Management said in a statement he understands the urgency in filling these positions.

“There are over 1,500 individuals waiting for their cases to be heard, but there are not board members in place which means the backlog cannot be addressed,” said Lankford, R-Okla.

Robbins keeps plugging away and the cases keep piling up.

“We are running out of space,” he said, shimmying between towers of boxes in a storage closet close to 6 feet tall. More boxes are stacked against the hallway wall and piled up in the clerk’s office.

“Any additional cases I work from now on are just, grains of sand on a beach.”