MUNICH, Feb. 16 (Xinhua) -- German Chancellor Angela Merkel on Saturday warned off the collapse of the global political structure and hailed multilateralism and cooperation in dealing with global challenges.

In a passionate speech at the Munich Security Conference that drew long-time applause, Merkel said the international political structure built after WWII could not be smashed but be reformed in a multilateral way. 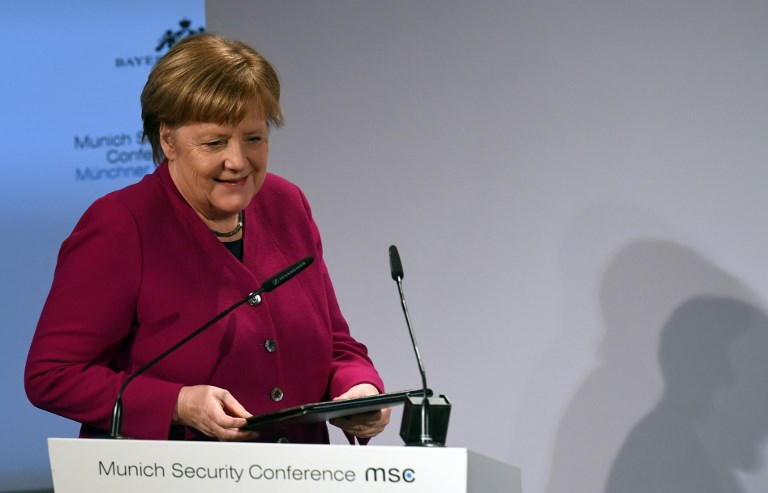 German Chancellor Angela Merkel prepares to give a speech during the 55th Munich Security Conference in Munich, southern Germany, on February 16, 2019. (Photo: AFP)

"What we see as an overall architecture underpinning our world as we know it is a bit of a puzzle now, if you like it has collapsed into many tiny parts," said Merkel, referring the motto of the conference this year that the world is becoming a great puzzle in pieces.

"Only all of us together (to pick up the pieces)," said Merkel.  "We have learned a lesson from WWII and Nazi history, that even though international multilateral fora may be slow or arduous, I am convinced that putting itself in other person's shoes, looking beyond the pale, and trying to forge win--win situations is better than solving these issues on your own," said Merkel.

"Multilateralism may be complicated, but it's better than staying at home alone," said Merkel at the end of her speech.

Merkel mocked the US accusation that German auto exports to the United States had undermined the US national security, saying many German cars were built in the United States and exported to China, and South Carolina has the biggest BMW plant in the world, not in Bavaria.

"We are proud of our cars and so we should be,....If that is viewed as a security threat to the United States, then we are shocked," Merkel's remarks drew applause from the audience.

Merkel called for an expansion of international cooperation to solve the major problems of a rapidly changing world. She warned allies against cutting all ties with Russia.

The German chancellor defended the gas pipeline project Nord Stream 2 linking Russia and Germany through the Baltic Sea, saying it would not strengthen Europe's dependence on Russian energy and it would not affect Poland and Ukraine as they would remain transit countries for Russia gas.

Merkel also appealed for cooperation on the Iran issue and managing global migration issues. She questioned whether the United States to leave the Iran nuclear deal and withdraw from Syria was the best way to tackle Tehran in the region.

She said perhaps Germany can learn from China for the best practices in development cooperation with African countries, in a bid to give African young people hopes, jobs and opportunities so that to prevent migration.

The chancellor promised to further increase German defense expenditure, but Germany could not reach the target of 2 percent of GDP by 2025 asked by the United States. Instead, Merkel promised to reach 1.5 percent by 2025.