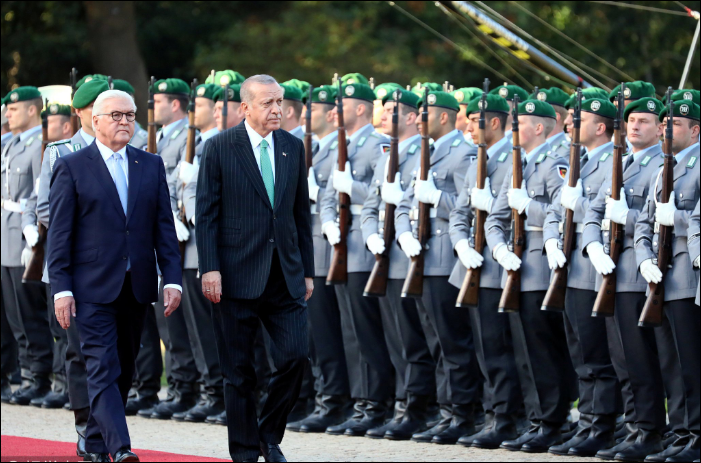 The pair is meeting a day after Germany beat Turkey to become the football tournament Euro 2024 host nation, following a tight race that took on political significance when Erdogan fanned accusations of German discrimination in the popular sport.

Erdogan told German local media he wanted to "turn the page" on a long period of tensions, sparked by Berlin's criticism of his crackdown on opponents after a failed 2016 coup.

His state visit to Germany, complete with military honors, is Erdogan's first there since becoming president in 2014 and comes as he is sparring with US President Donald Trump and the Turkish economy is in rapid decline.

But critics, including rights campaigners and German politicians, are angered by the red carpet treatment for a leader who has built an increasingly authoritarian reputation and just 18 months ago accused Berlin of "Nazi practices".

Merkel herself has repeatedly stressed the importance of good relations with Ankara, a partner she relies on to help stem the flow of migrants to Europe.

But the hostility towards the visit comes at an awkward time for the veteran chancellor, who can ill afford any missteps after being weakened by a slew of crises that have rocked her fragile coalition.

Merkel told reporters after talks with Erdogan she and the leaders of Turkey, Russia, and France planned to hold a summit next month on the situation in war-ravaged Syria.

"We are in favor of a four-way meeting with the presidents of Turkey, Russia and France and myself because the situation (in Syria) is still fragile," Merkel said, adding that the leaders aim to meet in October.

Syria, which has received vital military support from Russia and Iran, had said that it planned to seize Idlib, where Russia and Turkey agreed to set up a buffer zone during a meeting on September 17.

Erdogan had previously indicated that he planned to host a summit to discuss Syria on September 7 in Istanbul with Russian President Vladimir Putin, French President Emmanuel Macron and Merkel but the meeting never came together.

After the talks with Merkel, the Turkish president told a news conference that Can Dundar, former editor of opposition newspaper Cumhuriyet, is an "agent".

"This person is a convicted criminal according to Turkish law," Erdogan said.

Dundar and a colleague from the Cumhuriyet newspaper, Erdem Gul, were sentenced in 2016 to five years in prison for publishing a video purporting to show Turkey's intelligence agency trucking weapons into Syria. They were released pending appeal and Dundar left the country.

Turkey's highest court ruled in March that the journalist should have been sentenced to up to 20 years in prison on espionage charges.

Merkel said on Thursday she wanted to improve economic ties with Turkey but would raise human rights with Erdogan. The fate of German prisoners in Turkey will also be on the agenda.

Europe's de facto leader last week was forced to backtrack on a decision to promote a domestic spy chief who was under fire for his alleged far-right links, prompting Merkel to admit she had misread the public mood.

Erdogan critics have vowed to take to the streets across Germany to protest everything from Turkey's record on human rights and press freedom to its offensive against Kurdish militia in Syria.

Some 10,000 people are expected to rally under the motto "Erdogan Not Welcome" in Berlin on Friday.

Demonstrators are also planning to protest in Cologne on Saturday where Erdogan will open one of Europe's largest mosques, commissioned by the Turkish-controlled Ditib organization.

"Erdogan wants a fresh start with Germany. This is an opportunity," the newspaper of Sueddeutsche Zeitung said, urging Merkel to push Ankara to end its repressive tactics and free the five remaining German-Turkish nationals considered political prisoners by Berlin.

"But we can't just forget everything that happened. It could take years to rebuild trust," it added.