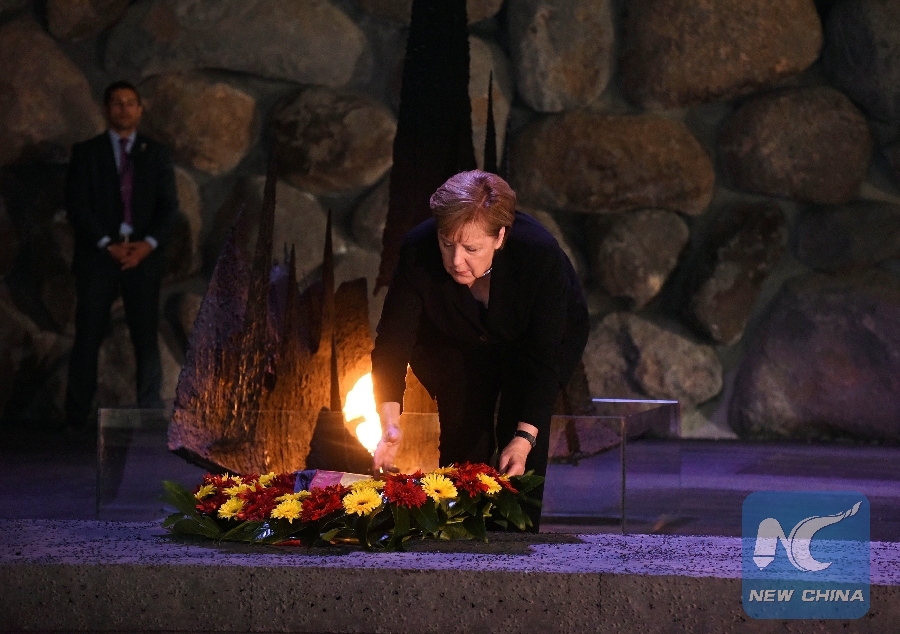 German Chancellor Angela Merkel lays a wreath during a ceremony commemorating the six million Jews killed by the Nazis in the Holocaust, in the Hall of Remembrance at Yad Vashem World Holocaust Remembrance Center in Jerusalem October 4, 2018. (Photo: Xinhua)

"Germany has a responsibility to remember the crimes of the Holocaust and to fight anti-Semitism, xenophobia, violence and hatred," Merkel wrote in Yad Vashem's guest book.

Later, she visited the Israel Museum in Jerusalem, where she was awarded an honorary doctorate by the University of Haifa.

"Today we are giving an honorary degree to one of the most outstanding leaders of the free world," said Prof. Ron Rubin, President of the University of Haifa, at the ceremony.

Merkel arrived in Israel on Wednesday night. Later on Thursday, she is scheduled to attend a "roundtable" with businessmen and meet Israeli President Reuven Rivlin.

She will also hold a meeting with Israeli Prime Minister Benjamin Netanyahu and attend inter-governmental talks with Netanyahu and Israeli and German ministers.

The talks will focus on "security, scientific, economic, cultural and cyber cooperation," the Israeli Prime Minister's Office said in a statement.

The ministers are expected to sign several bilateral agreements to strengthen economic and cultural ties between the two countries.

Merkel's talks with Netanyahu are expected to focus on the Iran nuclear deal, restarting the talks with the Palestinians, and the West Bank village of Khan al-Ahmar, which Israel plans to demolish shortly after Merkel's visit.

European countries and human rights organization have urged Israel to cancel the demolition.