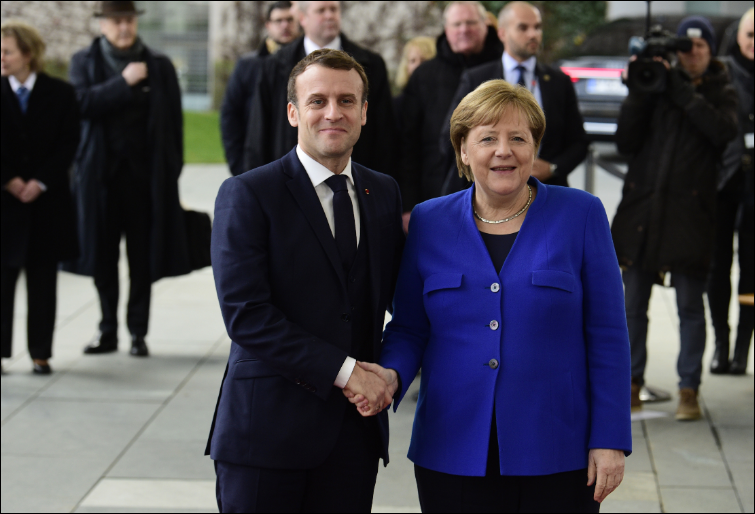 In their phone call with the President Putin, Merkel and Macron expressed their "concern over the humanitarian catastrophe for residents of Syria's Idlib province," Merkel's office said.

A months-long offensive by Syrian President Bashar Assad's forces aimed at recapturing remaining opposition-held areas in the region has seen close to one million civilians flee the violence.

The two European Union leaders "expressed their willingness to meet President Putin and Turkish President Erdogan to find a political solution to the crisis," the chancellor's office said.

Merkel and Macron "called for an immediate end to the fighting and unfettered humanitarian access to people in need," their statement said.

Since Syria's civil war erupted in 2011, the country has never seen so many people displaced in so short a time.

In nine years, millions of civilians have fled their homes and more than 380,000 have been killed.

Russia on Wednesday objected to the UN Security Council adopting a statement that would have called for a ceasefire in Idlib, diplomats said, after a tense closed-door meeting.

The UN urged neighboring Turkey to admit the new displaced people but Ankara is resisting as it already has some 3.7 million Syrians on its territory.

Two Turkish soldiers were killed on Thursday in an airstrike in northwestern Syria, Turkey said, after an attack by Ankara-backed opposition forces that targeted Syrian government troops. The deaths came after the Turkish president threatened to expand his nation's involvement in Syria if another one of his troops were hurt.

At least 15 Turkish soldiers have been killed in Syria this month. Intent on halting the advance, Erdogan had vowed February 12 to take military action "everywhere in Syria" if another Turkish soldier was killed or wounded.

Thursday's exchange marked a serious escalation that risks growing into a full-blown conflict between Turkey and Syria. Erdogan has also called on Assad's forces to retreat from Idlib or face an "imminent" Turkish attack.

The exchange began after opposition fighters shelled Syrian government forces and entered the village of Nairab, which Assad's forces had captured on February 3, the Turkish Anadolu agency said.

The Russian military said the militants' actions "were supported by Turkish artillery fire," which allowed them to break through the Syrian army's defenses. Four Syrian soldiers were wounded in the Turkish shelling, it said.

At the Syrian military's request, Russian Su-24 bombers then struck the militants to prevent them from advancing and allowing Syrian government forces to "successfully repel all attacks," the military added.

It was not immediately clear whether it was the Russian airstrikes that killed the two Turkish soldiers and injured five others.

Fahrettin Altun, a top aide to Erdogan, said the attack was carried out by Syrian government forces. On Twitter, he wrote: "The blood of our martyrs won't be left unaccounted for."

In Moscow, Russian Foreign Ministry spokeswoman Maria Zakharova raised what she called "serious concern about the Turkish military support for the militants."

"This incident represents a violation of the Russian-Turkish agreements on separation between the armed opposition and terrorists and the creation of a demilitarized zone. It risks provoking further escalation of the conflict in that part of Syria's territory," she said in a statement.

Turkey and Russia have closely coordinated their moves in recent years in Idlib province. Turkey maintains observation posts in northern Syria that were set up to monitor a 2018 cease-fire agreement with Russia. The truce collapsed in late 2019, leading to the current Syrian offensive.

Turkey also said on Thursday it wanted no "face-off" with Moscow over Syria's offensive but said it might receive U.S. defense missiles to protect Turkish forces.

"We have no intentions of a face-off with Russia," Turkey's defense minister Hulusi Akar told CNN Turk broadcaster, adding that talks would continue with Russian officials.

One of the issues being discussed is the airspace above Idlib and Turkey's expectations for Russia not to get involved, Akar said.

There has been no concrete agreement between Russia and Turkey after two rounds of talks between their respective delegations in Ankara and Moscow earlier this month.

Ankara insists that it wants to avoid a humanitarian disaster but also wants to avoid flow of refugees into Turkey, which is already home to 3.6 million Syrians.

"There is the threat of air strikes, missiles against our country," Akar told CNN Turk channel, adding: "There could be Patriot support."

He was referring to the US-made anti-missile defense system.

Despite the remaining threat of US sanctions against Turkey over the S-400 purchase, Akar said the S-400 system "would be activated… No one should doubt this."

The minister also said Turkey still sought to purchase the Patriots, an equivalent of S-400s, despite the US concern over the S-400 system.