WORLD Merkel nemesis gears up to grab the throne

Merkel nemesis gears up to grab the throne 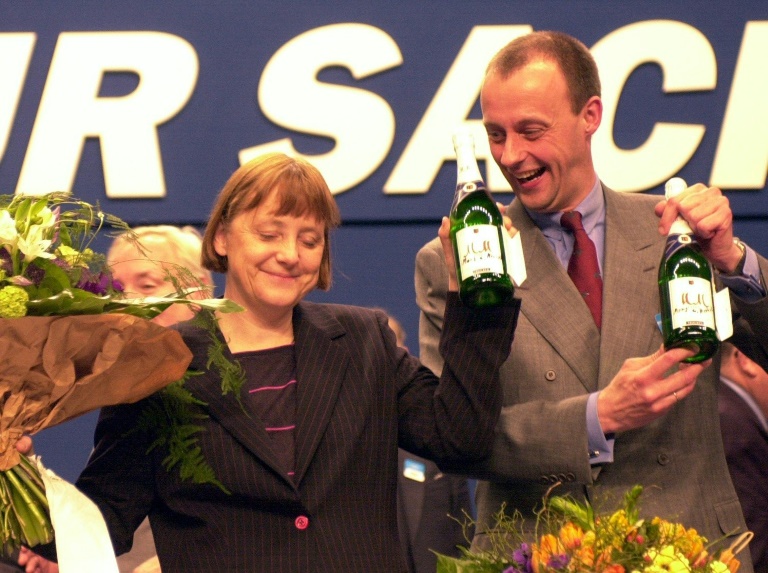 Angela Merkel stands alongside her party's parliamentary group leader Friedrich Merz after being elected as the new leader of Christian Democratic Union in Apri9l 2000.(Photo: AFP)

Angela Merkel faces strong headwinds in her bid to see out her fourth and final term as Germany's chancellor as a long-time nemesis emerged in the race to succeed her as party chief.

In her two-step plan to leave politics, Merkel has said she will first give up the Christian Democratic Union (CDU) party leadership in December before leaving as chancellor when her mandate runs out in 2021.

Merkel has said she hoped the announcement of her withdrawal would allow her fragile coalition to finally focus on governing Europe's top economy, rather than lurch from crisis to crisis because of infighting.

But her time as chancellor could yet be cut short if corporate lawyer Friedrich Merz, who has long nursed a grudge against Merkel, wins the party leadership race at a congress in December.

A day after Merz, 62, declared his candidacy, German media give him a real chance at grabbing the top seat with the backing of the CDU's conservative wing.

"His candidacy has electrified the CDU because in Friedrich Merz, the anti-Merkel is reaching out for the party chairman seat," said national daily Sueddeutsche Zeitung.

However, CDU general secretary Annegret Kramp-Karrenbauer as well as health minister and Merkel critic Jens Spahn have also thrown their hats in the ring.

A win by Kramp-Karrenbauer would better allow the German leader to see out her term.

But two separate polls commissioned by business weekly Handelsblatt and Spiegel Online show Germans favouring a Merz comeback over the other hopefuls.

A potential obstacle for Merz was removed as Armin Laschet, the premier of Germany's most populous state North Rhine-Westphalia, on Wednesday said he would not run.

Once a career CDU man, who started out in the youth wing of the party before rising to lead its parliamentary group, Merz's political ambitions were short-circuited in 2002.

After the CDU lost the general election that year, then party chief Merkel made it clear to Merz that his time leading the group in the Bundestag was over.

Merkel took over as CDU chief on the opposition benches and three years later, became chancellor.

A wounded Merz left the Bundestag in 2009, and returned to work as a lawyer.

Today, he is the supervisory board chairman of the German unit of mammoth asset manager BlackRock. He also holds top oversight positions in other major corporations, including Axa, Deutsche Boerse and HSBC.

In a press conference Wednesday, Merz played down his friction with Merkel, saying "there is nothing that needs reconciling" between them.

"I am convinced that Angela Merkel and I will get along under these changed conditions," he said, adding that he was "ready to join the venture" with her.

At the same time, he criticised her for lacking a vision on EU reforms, saying Germany has given "inadequate" answers to ambitious proposals by French President Emmanuel Macron.

Merz's proximity to industry would likely win him backing from economic leaders. In Merz, the business lobby would find a dyed-in-the-wool conservative who champions tax breaks.

"With his economically liberal and socially conservative positions, he would be the clear antithesis to Merkel," he added in an interview with Rhein-Neckar Zeitung.

In public clashes with Merkel before he quit parliament, Merz had pushed for tax cuts and complained she was shifting the centre-right party too far left and alienating core voters.

Although he has not made his views public about Merkel's deeply polarising refugee policy that let in more than a million asylum seekers since 2015, Merz had controversially backed the concept of a "Leitkultur" or the guiding or dominant national culture.

Conservative daily Frankfurter Allgemeine Zeitung said the far-right and anti-immigration AfD "sees him as a real danger" who could appeal to right-of-centre voters who have drifted away from the CDU to the young party.

Merz offered the conservative wing of the CDU "the promise that everything can be as it was before," said the Sueddeutsche Zeitung.

"Merz is the projection screen for anything and everything. And that's what makes his candidacy so promising, and his possible competitors so nervous."