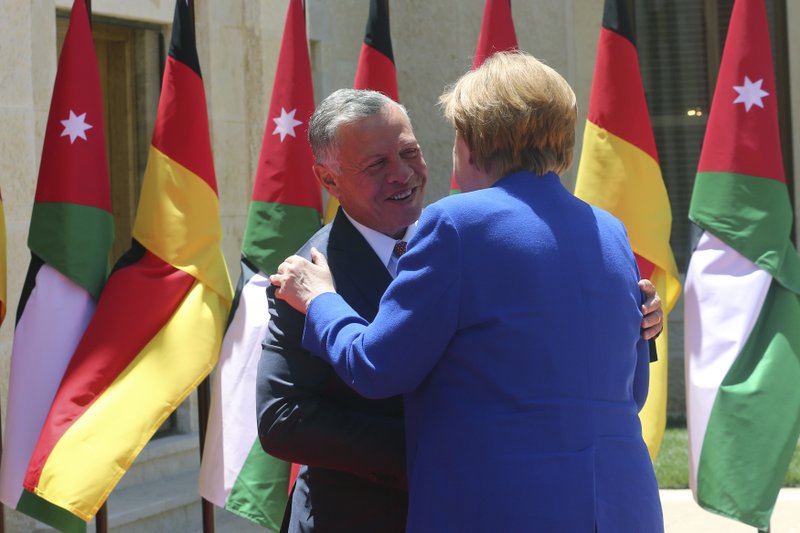 She arrived later in the Lebanese capital Beirut, another major Middle Eastern refugee host country, where she was expected to meet officials, businessmen and representatives of U.N. organizations during a two-day visit.

Merkel is visiting Jordan and Lebanon, both neighbors of war-torn Syria, amid an escalating domestic row over migration. Standing next to Jordan’s King Abdullah II, she made no reference to the crisis that’s straining her ruling coalition.

The chancellor said Germany will provide the $100 million loan in addition to bilateral aid which amounts to about 384 million euros ($442 million) this year. She said she hopes the additional funds will help Jordan carry out economic reforms sought by the International Monetary Fund.

The IMF is seeking such reforms to lower Jordan’s public debt-to-GDP ratio, which has risen to about 96 percent, in part because of the continued economic fallout from Syria’s civil war and other regional crises.

“We are aware of the challenges you face, both in the realm of security and in civil society development,” Merkel said, adding that she wished the government success in implementing “needed reforms.”

“The IMF, and it’s known for this, often has very ambitious ideas about reforms, and implementing them is anything but simple,” she said.

Merkel is meanwhile facing a serious crisis in her coalition.

Bavaria’s Christian Social Union party demands that some migrants should be turned back at Germany’s borders, and has given her two weeks to reach agreement with European partners. Interior Minister Horst Seehofer, the CSU’s leader, is threatening to go ahead unilaterally with his plans if she doesn’t — potentially threatening the governing coalition.

Leaders from a group of European Union countries, led by Germany and France, will meet Sunday to thrash out possible solutions.

Earlier Thursday, in a question-and-answer session with students at the German Jordanian University, Merkel said the refugee influx in recent years, including from Syria, had stirred debate in Germany over fundamental questions.

“I am on the side of those, and this is fortunately the majority in Germany, who say we need to be an open country,” she said, adding that “of course we need to regulate this.”

Separately, she expressed concern about a decree issued by Syrian President Bashar Assad which would require Syrian residents to register to prove and reclaim properties. The decree initially gave Syrians one month to register, but after an uproar was extended for a year.

“If this decree is implemented, it’s very bad news for all those who are currently outside the country,” she said, referring to refugees, among them hundreds of thousands in Germany.

“We are doing everything we can so this decree is not implemented,” she said, adding that it would make it difficult or impossible for displaced Syrians to return.

Merkel said she has raised her concerns with Russian President Vladimir Putin, a key Assad ally.

More than 6 million Syrians have fled their homeland since the civil war erupted in 2011. Most have settled in regional host countries, including Jordan, Lebanon and Turkey. Hundreds of thousands migrated onward to Europe, embarking on dangerous sea routes at the mercy of smugglers.

The regional hosts have said they are not receiving sufficient international support for shouldering a disproportionately heavy refugee burden. Jordan is home to some 660,000 registered Syrian refugees, but says the actual number of displaced Syrians in the kingdom is twice as high. In Lebanon, a politically and economically fragile country, an estimated one in four residents is a refugee.

Lebanese officials say the country’s economy is collapsing and are urging Syrians to return home to areas that have relatively stabilized. Merkel met with Lebanese Prime Minister Saad Hariri upon arrival, and the two discussed bilateral relations including on the economic front, according to a statement from the premier’s office.

In recent years, international donors have tried to shift from humanitarian to development aid, particularly in Jordan, hoping to encourage refugees to remain in the Middle East. The program, meant to create jobs for 200,000 Syrian refugees, has had partial success.

Before heading to Lebanon, Merkel visited an air base where German troops are deployed as part of an international coalition against the so-called Islamic State group. The group has been pushed back from most of the territory it used to control in Syria and Iraq, both Jordan’s neighbors.

Merkel said the mission has been successful, but isn’t finished because there’s “still space for retreat,” apparently referring to escape routes for IS fighters. “That’s why you have to keep flying this mission,” she told troops.