German Chancellor Angela Merkel's CDU party will elect its new leader in mid-January after a planned vote in early December was pushed back because of a surge in coronavirus infections. 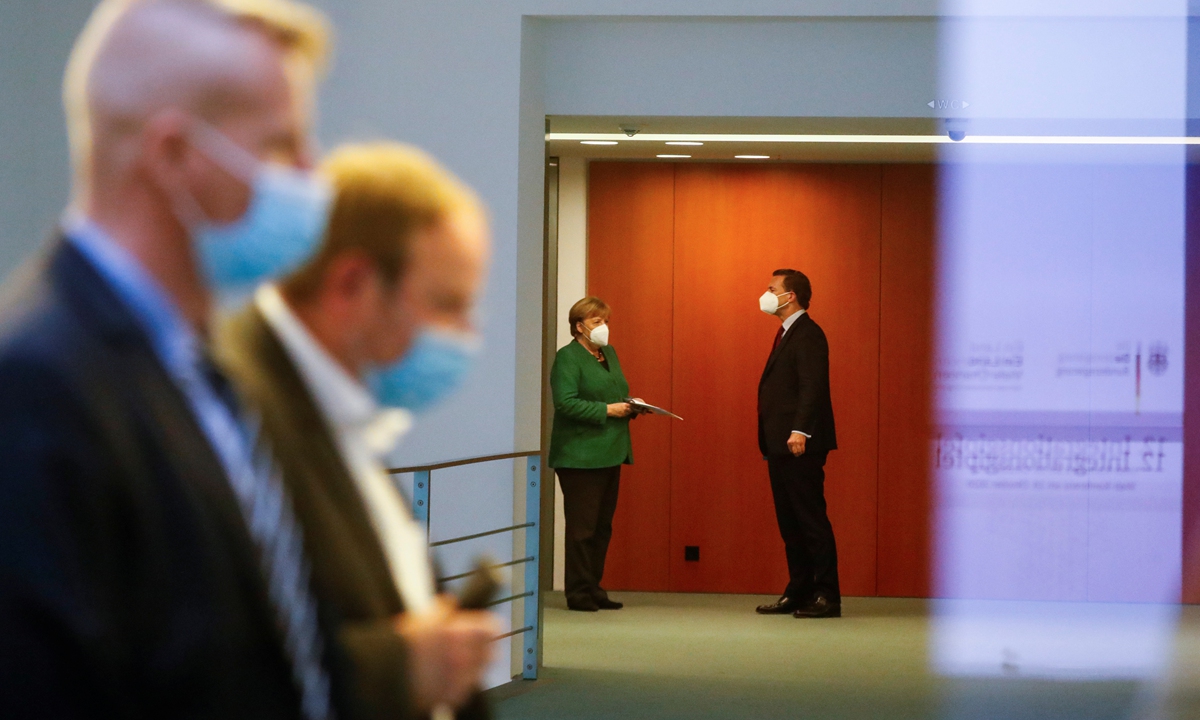 German Chancellor Angela Merkel (left) speaks with her spokesman Steffen Seibert as they attend the National Integration Summit at the Chancellery in Berlin, on Monday. German Integration Commissioner Annette Widmann-Mauz has expressed her concern over effects of the pandemic on immigrants. (Photo: AFP)

The three hopefuls for the top job in the Christian Democratic Union had put forward the date, party general secretary Paul Ziemiak said in a tweet late Saturday.

"This agreement is a strong signal for cohesion in our party," he wrote after talks with outgoing party chief Annegret Kramp-Karrenbauer.

The candidates have proposed an online congress if meeting in person were to be impossible because of restrictions to curb coronavirus transmission.

The chief of the CDU traditionally leads it and its smaller Bavarian sister party the Christian Social Union to the polls.

The chosen candidate would have a strong claim on the post of chancellor and be in position to replace Merkel should the conservative bloc win the 2021's election.

Merkel protege Kramp-Karrenbauer took over as leader of the party in 2018, after the veteran chancellor said she would not seek a new mandate at next year's polls. But the race for the party's top job was thrown wide open when Kramp-Karrenbauer resigned just a few months into the post over her handling of a regional election scandal.

The battle for the post has been overshadowed by the pandemic.

After the party's top brass decided on Monday to postpone the vote due to increasing cases, Merz lashed out at the move which he claimed worked against him while giving rival Laschet an advantage.

All three candidates are anxious to regain the media spotlight, particularly as a fourth potential replacement for Merkel has emerged - not from the CDU, but from sister party CSU.

Bavarian state premier and CSU leader Markus Soeder has repeatedly stressed that his place is in Bavaria. But his tough stance on halting virus transmission has won him plaudits.

In contrast, former favorite Laschet, 59, who heads Germany's most populous state, has lost momentum after several gaffes in the handling of the pandemic.

Merz, a 64-year-old millionaire and old Merkel rival, is popular with the CDU's most conservative faction. But he has found little support for his ultra-liberal positions at a time when unprecedented state intervention is desperately required to prop up the economy.

Centrist Roettgen, 55, has also struggled to get attention.