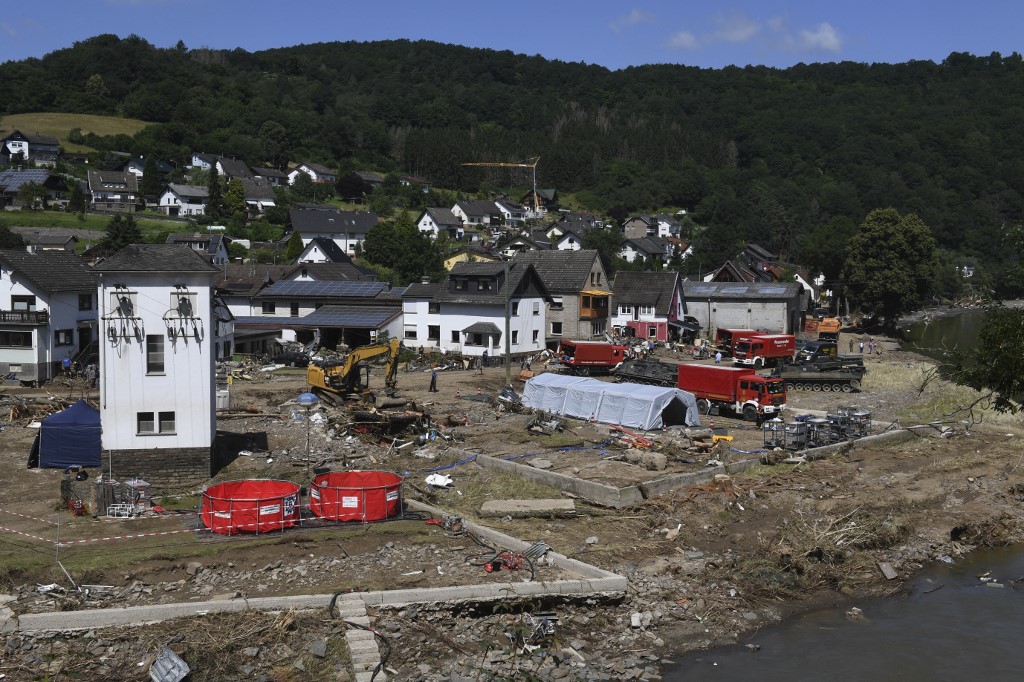 An areal view shows helpers and vehicles at work to remove debris along the river Ahr after the floods caused major damage in Schuld near Bad Neuenahr-Ahrweiler, western Germany, on July 18, 2021. (Photo: AFP)

Chancellor Angela Merkel said Sunday she was horrified by the "surreal" devastation in the flood-ravaged region of western Germany, as the death toll in Germany and Belgium passed 190 with dozens of people still missing.

"We must hurry," she said. "We have to be faster in the fight against climate change."

Wearing hiking boots and offering pandemic-safe fist bumps to rescue workers, Merkel walked through the village of Schuld in Rhineland-Palatinate state, one of the two hardest-hit regions in western Germany.

She listened to the accounts of residents where the swollen Ahr river swept away houses and left debris piled high in the streets.

Merkel, who is retiring from politics after September's elections, described the damage as "surreal" and pledged quick aid to rebuild.

"It is shocking -- I can almost say that the German language doesn't have words for the destruction that's been wreaked," she said.

At least 160 people have died since Wednesday in Germany's worst flooding in living memory, police said.

Merkel was accompanied by Malu Dreyer, premier of Rhineland-Palatinate which has recorded 112 fatalities.

As they navigated damaged roads together, the chancellor gripped the hand of Dreyer, who has multiple sclerosis, to support her.

At least 31 people have lost their lives in neighbouring Belgium.