WORLD Mexican, US presidents could meet in September

Mexican, US presidents could meet in September 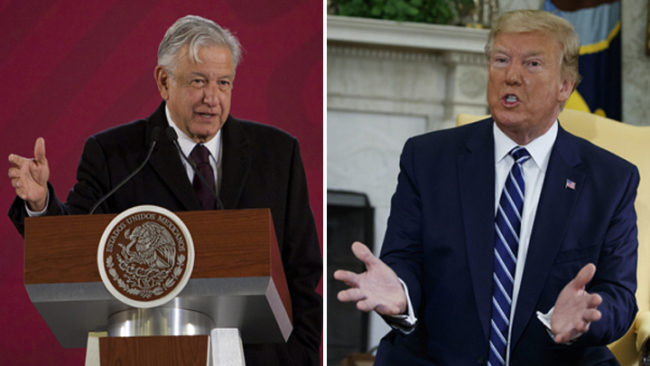 Mexican President Andres Manuel Lopez Obrador said Friday that he could meet with his US counterpart Donald Trump in September to review the progress of the migratory agreement between the two countries.

"We want to evaluate the results, we could do it jointly ... it is in three months ... and of course that this meeting could take place," said Lopez Obrador during his daily morning press conference.

Trump said on Thursday in an interview with Telemundo network that he is willing to meet with his Mexican counterpart, although he did not offer any details.

On June 7, the Mexican and US governments reached an agreement to reduce the number of migrants from Central America.

The agreement suspended the implementation of tariffs that Trump threatened to impose on all Mexican imports beginning on June 10.

Under the deal, Mexico promised to increase its efforts to reduce undocumented immigration and strengthen the deployment of its recently created National Guard.

The flow of Central Americans crossing Mexico in their attempts to reach the US increased since the end of 2018 after the formation of caravans.