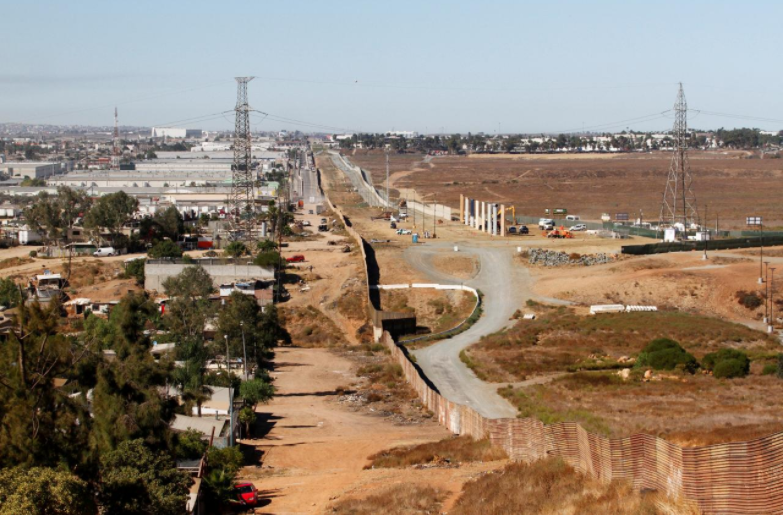 FILE PHOTO: Prototypes (R) for U.S. President Donald Trump's border wall with Mexico are shown near completion in this picture taken from the Mexican side of the border, in Tijuana, Mexico, October 23, 2017. REUTERS/Jorge Duenes/File Photo

U.S. President Donald Trump’s wall is far from built but towering concrete and steel prototypes in San Diego are making Mexicans living just south of the border feel his campaign pledge has turned them into “pariahs.”

Eight samples as high as 30 feet (9 meters) were completed last week near the Otay Mesa border crossing, the first tangible sign of Trump’s vow to build a wall from California to Texas for some $21.6 billion.

Opposite San Diego, residents of the Mexican city of Tijuana, where homes, companies and parks abut a corrugated steel fence on the border, dread the prospect of work on a permanent wall.

“People are still going to cross out of necessity even though they view us as pariahs over there,” said student Paola Gomez, 21, standing outside her home as the noise of workers putting up the sections drifted across the border.

“That’s how it looks with things like (the wall): they view us as pariahs. The worst thing is, it’s being built by Latinos themselves.”

Trump pledged frequently during his presidential campaign to build the wall to help tackle illegal immigration and crime in the United States.

He launched his bid in June 2015, accusing Mexicans of sending rapists and drug-runners into the United States, comments that caused widespread outrage south of the border.

Tijuana locals said they heard Spanish-speaking workers helping to build the prototypes, driving home the irony that Latino labor was being used to deter immigration from Latin America.

“They need Mexicans and other undocumented people. They save lots of money with us,” said Manuela Altamirano, 42, who watched from her home as the strips of wall went up. “Trump constantly does things to humiliate the Mexican people ... These walls are like monsters he created, like a border Frankenstein.”

Around 20 protesters gathered on the Mexican side last weekend, setting a Trump-style pinata on fire and waving signs reading “No to the wall” and “We’re not enemies”, said organizer Sergio Tamay of migrant shelter Angels Without Borders.

Later this month, tests are due to begin on the prototypes to determine how easily immigrants could climb over or dig under them, methods of entering the United States illegally that proved successful in the past.

Standing around 40 meters (130 feet) from the Mexican border, the concrete rectangles created a depressing landscape, said Tijuana resident Alexis Franco, 22, who watched their construction since it began in late September.

“This is just going to be a nuisance for all of us who live here,” Franco said outside his dirt-floor home, speaking over the noise of heavy machinery on the other side of the border.

“If it’s not the machines, it’s the constant movement of the workers, including some who speak Spanish,” he added.

Guadalupe Garcia, 38, who lives on an unpaved street nearby, said she felt powerless to protest even though the construction din often woke and frightened her baby.

“Unfortunately, we can’t do anything about it,” she said. “It’s another country, but it’s affecting us.”