Mexican authorities allowed dozens of women and children from a US-bound Honduran migrant caravan to enter the country Saturday but thousands remain stranded on a border bridge between Guatemala and Mexico where riot police barred their progress. 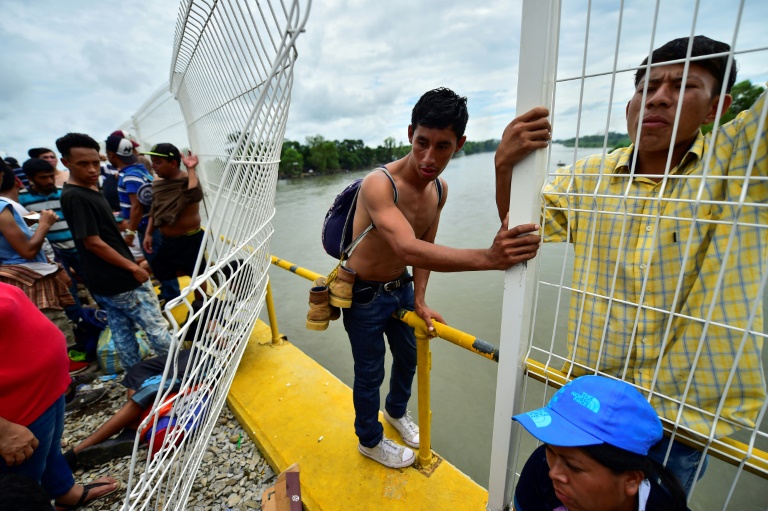 Honduran migrants heading in a caravan to the US prepare to jump into the Suchiate River from the Guatemala-Mexico international border bridge in Ciudad Hidalgo, Mexico, on October 20, 2018. (Photo: AFP)

Mexico's ambassador to Guatemala Luis Manuel Lopez told AFP the women and children would be processed by immigration authorities and taken to a shelter in the city of Tapachula, 40 kilometers away.

Mexican authorities said around 900 other migrants -- tired of waiting on the bridge -- resorted to crossing the Suchiate River below on makeshift rafts and police did not intervene as they clambered up the muddy riverbank on the Mexican side.

Many of them had spent more than 24 hours on the packed bridge where heat and hunger was adding to a growing sense of despair. Efforts to retrieve them were ongoing, authorities said. 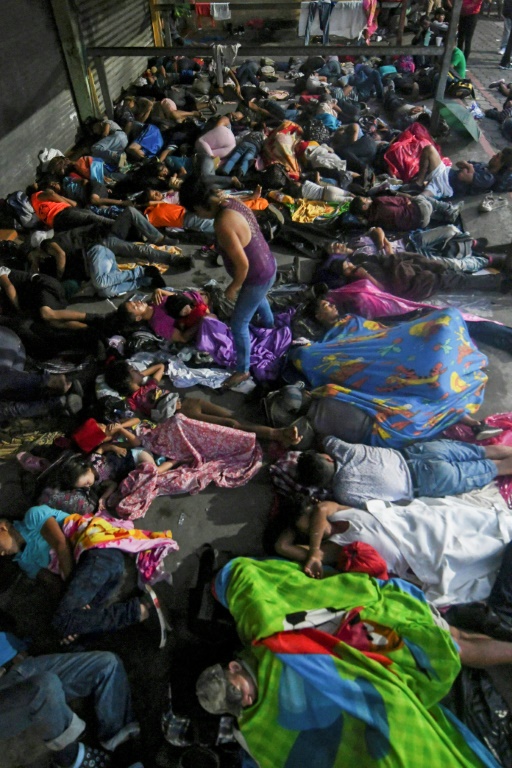 Honduran migrants sleep in the main square of Tecun Uman, Guatemala, on the border with Mexico. (Photo: AFP)

US President Donald Trump, speaking at a rally in Elko, Nevada, kept up his rhetoric against the migrants and suggested the caravan was politically motivated.

"The Democrats want caravans, they like the caravans. A lot of people say 'I wonder who started that caravan?'" he said.

He thanked Mexico for blocking the caravan's progress. "Mexico has been so incredible. Thank you Mexico and the leaders of Mexico, thank you. And you know why, because now Mexico respects the leadership of the United States."

Last week, Trump threatened to cut aid to the region, deploy the military and close the US-Mexican border if authorities did not stop them.

"This migration has political motivations," said Morales, "which is violating the borders and the good faith of the states and of course putting at risk the most important thing, people."

"Without a doubt, we have a lot to do so that our people can have opportunities in their communities," he said.

The caravan originated in the Honduran town of San Pedro Sula a week ago, with about 2,000 would-be migrants drawn together by social media.

It is notably different from the "Migrant Viacrucis" organized in April every year by NGOs to draw attention to the plight of Central American migrants.

The women ran forward when immigration officers unchained a gate that had been pinning back migrants at the crossing.

The women and children had spent the night on the bridge where hundreds slept in the open, as well as in the main square of the Guatemalan border town of Tecun Uman.

Mexican authorities insisted those on the bridge would have to file asylum claims one at a time in order to enter the country.

Guatemala has organized a fleet of buses to take Hondurans back to their country.

More than 300 people have taken up a government offer of a bus ride home to their country, police said. 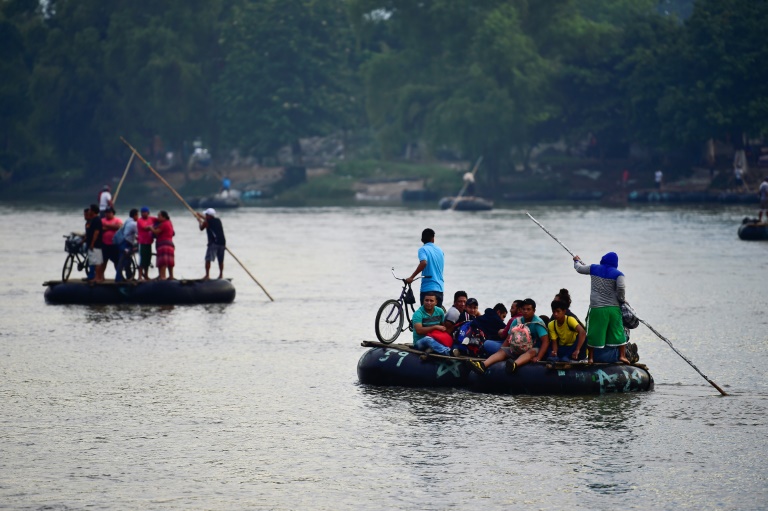 Honduran migrants use makeshift rafts to cross the Suchiate River that marks the border between Guatemala and Mexico. (Photo: AFP)

A surge, then clashes

The caravan of mainly Honduran migrants had surged through a series of police lines and barricades up to the final fence on Mexico's southern border on Friday.

Sections of the crowd hurled rocks and other objects at hundreds of riot police, who responded with rubber bullets and tear gas -- stalling the caravan determined to reach the United States.

Several people were injured. Police used tear gas to drive the migrants back and calm was restored.

Organizers of the caravan said a section of the crowd had confronted the police and spoiled what had been an orderly attempt to cross into Mexico.

Some, like 22-year-old Alex Benitez, paid locals to take him across the river border by raft.

"They promised they will give us a visa but the people are there (on the bridge) since yesterday and they have not given us anything," Benitez said as he waited for friends who were crossing on another raft, made from huge truck tires.

Some, like 25-year-old Honduran Bryon Rivera, had decided to give up on a long-held dream of a better life in America.

"It is better to go back. It is very hard. There is a lot of disorder," said Rivera, who was hoping to get on a bus back to Honduras laid on by the Guatemalan government.

The soft-spoken 25-year-old said he was traveling with three friends who decided to remain in the caravan, but that for him, the fear of being deported once he reached Mexico was too much.

The migrants are generally fleeing poverty and insecurity in Honduras, where powerful street gangs rule their turf with brutal violence.

With a homicide rate of 43 per 100,000 citizens, Honduras is one of the most violent countries in the world.