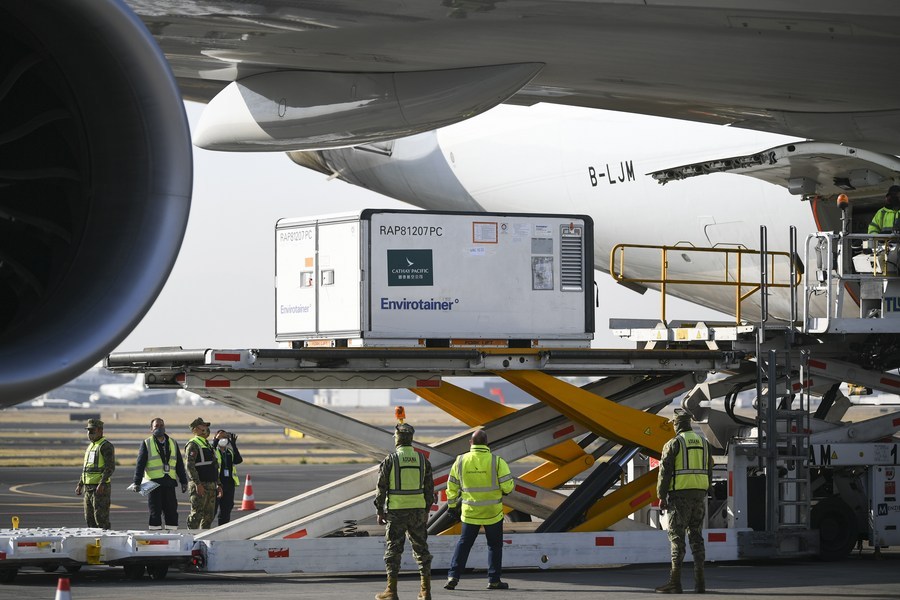 Staff members unload a temperature-controlled cargo container with COVID-19 vaccines from Chinese company Sinovac inside from a plane at the airport in Mexico City, Mexico, Feb. 20, 2021. (Photo: Xinhua)

Mexico's government designated the first shipment of the Sinovac vaccine to arrive in Ecatepec, a city in central State of Mexico that lies on the outskirts of the capital Mexico City.

Early in the day, brigades of healthcare workers began to administer the vaccine to hundreds of residents aged 60 and over who went to the Las Americas cultural and sports center to get vaccinated.

"The first call was very important because it lets us know there is interest on the part of the citizens and, above all, that they are hopeful this issue can now be eradicated from our population," Ecatepec Mayor Fernando Vilchis told reporters at the vaccination site.

Mexican health authorities announced on Sunday that Ecatepec would receive the first batch of the Sinovac vaccine as the country's second-most populous municipality has COVID-19 mortality rates that are above the national average.

The start of vaccination was "a very important day" for Ecatepec, where more than 4,000 people have died from COVID-19, the mayor said.

The Sinovac vaccine arrived in Mexico after the country's regulatory agency, the Federal Commission for Protection Against Sanitary Risks, announced on Feb. 10 that it authorized its emergency use against COVID-19.

Mexico, which have reported 2,041,380 confirmed cases of COVID-19 and 180,107 deaths from the disease as of Sunday, has been carrying out a vaccination campaign in stages since December last year.