Mexico buses home dozens of asylum seekers returned by US 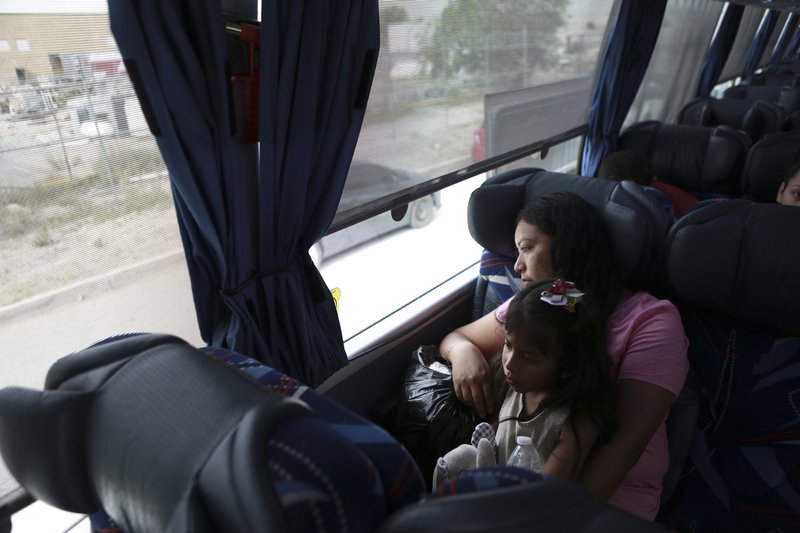 A Central American migrant woman and child wait in a bus after deciding to voluntarily return to their country, in Ciudad Juarez, Mexico, Tuesday, July 2, 2019. (Photo: AP)

Dozens of Central Americans who had been returned to the border city of Juarez to await the outcome of their US asylum claims were being bused back to their countries Tuesday by Mexican authorities, a first for that size group in the program commonly known as “remain in Mexico.”

In a statement, the Foreign Relations Department described it as the beginning of a “temporary program of voluntary return” for migrants in northern Mexico who wish to go home. It said 69 people — 40 Hondurans, 22 Guatemalans and seven Salvadorans — were involved, and 66 of those were returnees under the US program.

Officials said the bus left Ciudad Juarez at 9 a.m. and that all aboard wanted to be repatriated to their native countries in Central America’s Northern Triangle, the source of a surge of migration in recent months, many of them families with children. It’s at least a day and a half journey overland from the city to Mexico’s southern border.

Transportation and assistance were coordinated by the International Organization for Migration, the Foreign Relations Department, Mexico’s National Immigration Institute and two non-governmental groups.

The Immigration Institute said the program would soon be rolled out in Tijuana and Mexicali as well, two other cities that have been taking in returnees from the United States under the program that began in January. The institute added that the 69 had normalized migratory status in Mexico.

It was not clear what impact there could be on the asylum-seekers’ cases in the United States, whether going home meant giving up their claims or whether it would be possible to continue from Central America. Asylum-seekers returned to Mexico are supposed to cross the border for US court dates, and then go back to Mexico.

“Legally this is all new territory, so it’s hard to know,” said Andrew Selee, president of the Migration Policy Institute.

There have been nearly 17,000 returns by asylum seekers to Mexico from the United States under the program, for waits that stand to take many months or even longer as claims slog through backlogged US immigration courts.

Under a recent agreement with Washington to head off threatened US tariffs on Mexican goods, Mexico agreed to an expansion of the program to other border points beyond those three cities, where it was already in place.

That has raised fears among advocates for migrants that Mexican border cities are ill-prepared to cope with the influx, with resources scarce and many shelters already overflowing.

Cities like Juarez and Tijuana can be dangerous places with high homicide rates. Farther east along the border, in the Gulf coast state of Tamaulipas, drug cartels have historically been known to target migrants for kidnapping, extortion and murder.

Nuevo Laredo, in Tamaulipas across from Laredo, Texas, is one of three new cities to begin receiving returnees from the United States.

Selee said asylum seekers often find it hard to get by for long periods in Mexico while they wait for their claims to be decided, so it is not surprising some would want to leave.

“Leaving people in a limbo situation increases the pressure on those who don’t think they have strong asylum claims or simply feel they can’t make ends meet living in Mexico,” he said.

He added that Washington would likely see this as a win.

“This is obviously what the Trump administration has wanted, to be able to show people returning who are unsuccessful in pursuing their asylum applications, because that sends the signal back to others who try and make the journey,” Selee said.

While Ciudad Juarez was the last of the three to begin receiving asylum-seekers, it has overtaken the others in numbers. The Immigration Institute says Juarez has received 7,706 returnees, compared with 5,709 in Tijuana and 3,299 in Mexicali.

According to government figures, about 104,000 irregular migrants were registered in Mexico from January through June, and about 76,000 people have been repatriated.