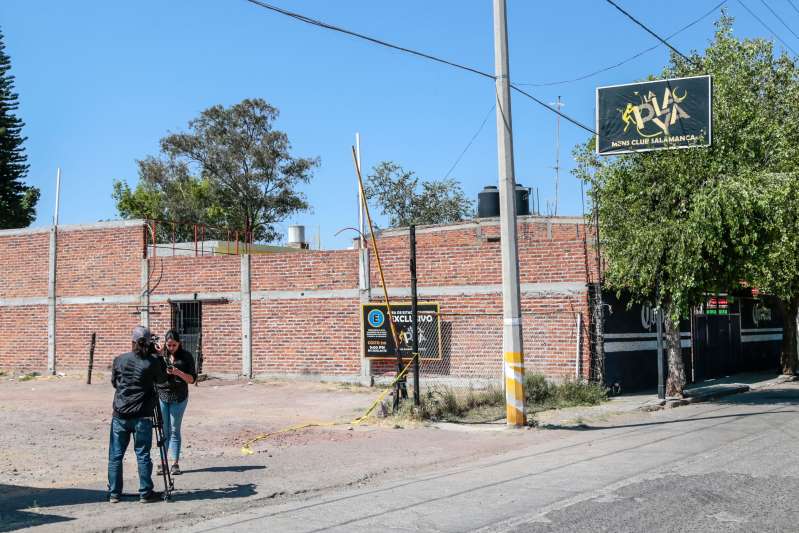 Journalists work outside the nightclub where at least 15 men were killed in an attack in Salamanca, Guanajuato state, Mexico, on March 9, 2019. (Photo: Getty Images)

Armed assailants opened fire in a nightclub in central Mexico in the early hours of Saturday, leaving at least 15 people dead and three others wounded, prosecutors said.

The incident took place in the city of Salamanca in Guanajuato state, where authorities have launched an operation against criminal gangs involved in fuel theft.

The armed men fled the La Playa club -- located in a residential and commercial area of the city -- in an escape car, prosecutors said, adding that an investigation had been opened.

Witnesses told authorities that the assailants were masked.

The victims have not yet been identified.

The attack occurred just hours after President Andres Manuel Lopez Obrador made a working visit to Guanajuato, where he spoke on Friday about his strategy for putting a stop to fuel theft.

On Saturday, Lopez Obrador said he regretted the "loss of innocent lives."

"We are fighting to bring peace to the country," he told reporters.

Salamanca is home to about 140,000 people. The main pipeline of state oil company Petroleos Mexicanos (PEMEX) in Guanajuato state runs through the city.

Fuel theft is a massive black market industry in Mexico that has thrived with the help of corrupt officials and company insiders.

So-called "huachicol," as the stolen fuel is known, costs about half of market price.

Every year, fuel theft costs Pemex about $3 billion, according to government statistics.

But the strategy, which included the closing of pipelines from which most of the country's fuel is transported, has caused a backlash, especially when it led to severe gasoline shortages.

The pipelines have since been reopened and security stepped up.

The market for stolen fuel has also unleashed a turf war between rival gangs, similar to that seen between drug cartels.

Salamanca is less than 100 kilometers (60 miles) from Santa Rosa de Lima, where authorities have carried out a days-long operation against Juan Antonio Yepez, the alleged leader of a fuel-stealing cartel.

In late January, a fake bomb was found in a car parked close to the Salamanca refinery.

Nearby, a sign was posted with a threatening message for Lopez Obrador and a demand that security forces be withdrawn from the state. The sign was believed to be Yepez's handiwork.

The anti-establishment austerity crusader famously disbanded the presidential guard when he took office. Security analysts have warned his safety could be at risk.

Some now say the violence associated with fuel theft is as serious as that stemming from the drug trade.

More than 200,000 people have been murdered in Mexico since 2006, when the government controversially deployed the army to fight drug trafficking.

Mexico registered more than 33,000 homicides last year, the most since national record-keeping began in 1997, according to government figures.