President Andres Manuel Lopez Obrador launched an ambitious plan Saturday to stimulate economic activity on the Mexican side of the U.S.-Mexico border, reinforcing his country's commitment to manufacturing and trade despite recent U.S. threats to close the border entirely. 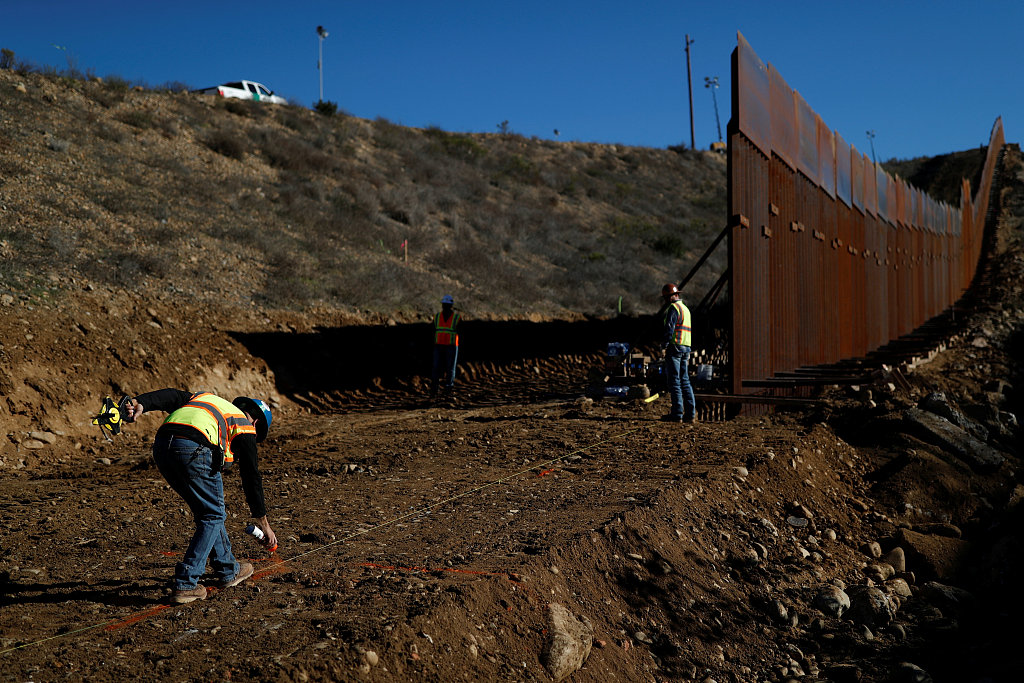 Workers on the U.S. side, paint a line on the ground as they work on the border wall between Mexico and the U.S., as seen from Tijuana, Mexico, December 13, 2018. (Photo: VCG)

Mexico will slash income and corporate taxes to 20 percent from 30 percent for 43 municipalities in six states just south of the U.S., while halving to 8 percent the value-added tax in the region. Business leaders and union representatives have also agreed to double the minimum wage along the border, to 176.2 pesos a day, the equivalent of $9.07 at current exchange rates.

Lopez Obrador, who took office on Dec. 1, said the idea is to stoke wage and job growth via fiscal incentives and productivity gains. U.S. President Donald Trump has repeatedly complained that low wages in Mexico lure jobs from the U.S. Mexico committed to boost wages during last year's negotiations to retool its free trade agreement with the U.S. and Canada.

Speaking from Ciudad Juarez, a manufacturing hub south of El Paso, Texas, Lopez Obrador said Saturday he agrees with Trump that Mexican wages "should improve." He decried, for instance, that Mexican auto workers earn a fraction of what their U.S. counterparts take home, topping out at just $3 an hour versus a typical wage of $23 an hour in the U.S.

Yet the economic plan comes at a delicate moment for the border region. Trump threatened as recently as last week to close the U.S.-Mexico border "entirely" if Democrats refuse to allot $5.6 billion to expand the wall that separates the two countries.

Economy Minister Graciela Marquez noted Saturday that the border region targeted for economic stimulus accounts for 7.5 percent of Mexico's gross domestic product. And in recent years, she said, the 43 municipalities included in the plan have boasted combined economic growth of 3.1 percent, above the national average of 2.6 percent for the six years through 2017.

Much of that robustness owes to trade and proximity with the U.S., the world's biggest economy.

"We have to take advantage of this locomotive that we have on the other side of the border," she said.

Marquez expressed optimism that the stimulus plan will direct more Mexican and foreign investment into the border region. The plan for the border region is part of what Lopez Obrador calls "curtains of development" to shore up different corridors of the country so that Mexicans stay rather than migrating in search of better economic prospects.