The Mexican banks of the Suchiate river dawned Sunday with a heavy presence of immigration agents in place to enforce Mexico’s new limits on all but essential travel at its shared border with Guatemala.

Dozens of immigration agents lined the riverside asking those who landed on the giant innertube rafts that carry most of the cross-border traffic for documentation and turning many back. 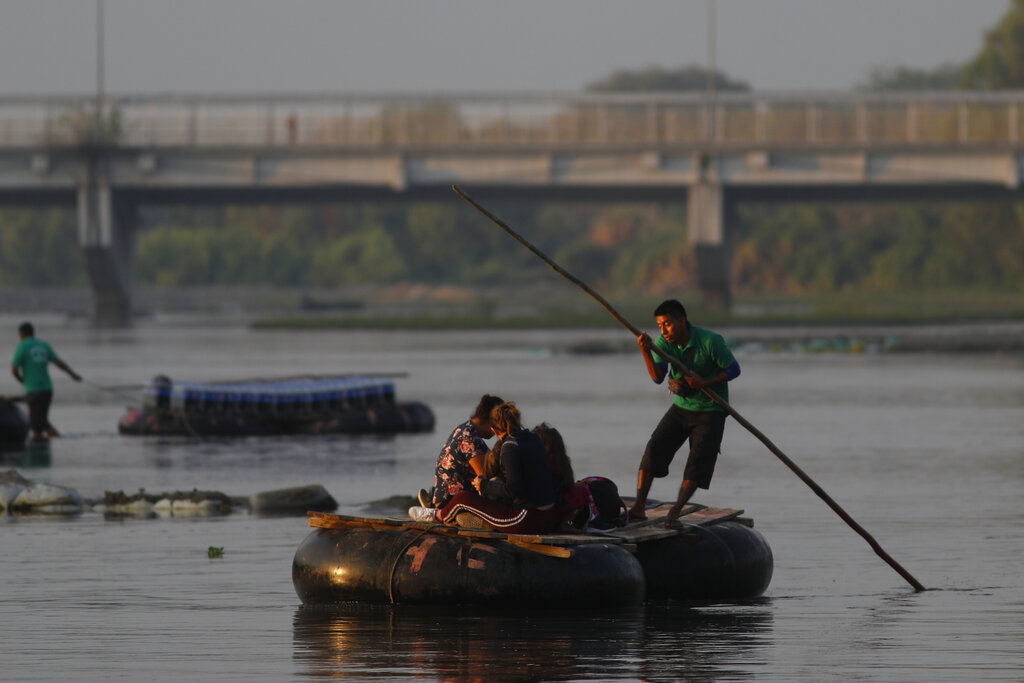 Guatemalan travelers cross the Suchiate River, border between Guatemala and Mexico, into Mexico aboard a raft near Ciudad Hidalgo, Sunday, March 21, 2021.（AP Photo）

But those turned away weren’t migrants, they were the small-time Guatemalan merchants and residents from Tecun Uman, across the river, who buy in bulk in Mexico to re-sell in Guatemala or purchase household items when the exchange rate favors it.

“They haven’t let us enter because they think we’re migrants when really we’re only coming to shop,” said Amalia Vázquez, a Guatemalan citizen with her baby tied to her back and seven other relatives accompanying her. Vázquez said her family travels the 100 kilometers monthly from Quetzaltenango to buy plastic items and sweets they re-sell at home.

After a negotiation, immigration agents allowed her sister and another relative to pass, but they had to leave their IDs with agents while they shopped. Nearby, other agents turned away a man who said he was just coming to buy his medicine.

The Mexican government has interrupted the usually free-flowing cross-river traffic here before, infuriating merchants on both sides. In recent years, as migrant caravans arrived in Tecun Uman, Mexican troops lined the Mexican side of the Suchiate and largely stopped the raft traffic.

The last time was in January 2020 when hundreds of soldiers blocked large groups of migrants trying to cross.

This time there is no large migrant presence across the river, but Mexico is again under pressure to slow the flow of migrants north as the U.S. government wrestles with growing numbers, especially of families and unaccompanied minors.

Many of those, however, are believed to be traveling with smugglers who can simply choose among the hundreds of unmonitored crossing points on Mexico’s long jungle borders with Guatemala and Belize.

The government said the measures that went into effect Sunday — one year into the pandemic — were aimed at slowing the spread of COVID-19. But most saw it as a cover to again try to control illegal migration and no one was talking about health concerns. The U.S. and Mexico have had a similar limit on non-essential travel on their shared border for a year, but Mexico is one of the few countries to otherwise not impose health restrictions on people entering the country by land or air.

“There's no reason that this would help public health," said Yuriria Salvador of the Fray Matías de Cordova Human Rights Center in Tapachula. ”It comes from the negotiation with the United States, it's very clear."

“What is going to happen is that they'll be pushed more into secrecy and the trafficking of people,” Salvador said.

Juan José Ramírez, a Guatemalan who crosses to Mexico daily just upriver at the Talisman crossing, said he didn't note any change Sunday at the port of entry.

“They only asked for my border visitor card, but the taking of the temperature and all of that, they stopped awhile ago," he said. "It was only at the beginning (of the pandemic) when it was worse.”

The Mexican government last week also announced a new effort against the smuggling of families with minors. They said they would increase patrols in areas and checkpoints and use drones and night vision to watch crossing points.

On Saturday, Mexico's immigration agency announced that authorities had detained 95 Central American and Cuban migrants who arrived by plane to the northern city of Monterrey. Among them were eight unaccompanied minors. The flights originated in southeast Mexican cities, Villahermosa and Cancun. Smugglers sometimes put migrants who can pay on such flights to avoid highway checkpoints in Mexico.

On Friday, hundreds of National Guard troops and immigration agents paraded through the capital of the southern state of Chiapas. On Sunday, few soldiers were visible along the river.

“It’s all a show,” said a woman with a sweets stand in the market, who asked to remain anonymous to avoid retaliation. “They don’t let the ones coming to buy pass, but the smugglers are very active.”

The flow hasn’t reached early 2019 levels yet, but the U.S. government is worried by the rapid increase in illegal entries since last fall.

“It isn’t much that we take for reselling," said María Vázquez, Amalia’s sister, while she negotiated the price of some cookies and her family waited by the river. “The migrants traveling in groups really harm us and the pandemic too. They never asked us for documentation.”