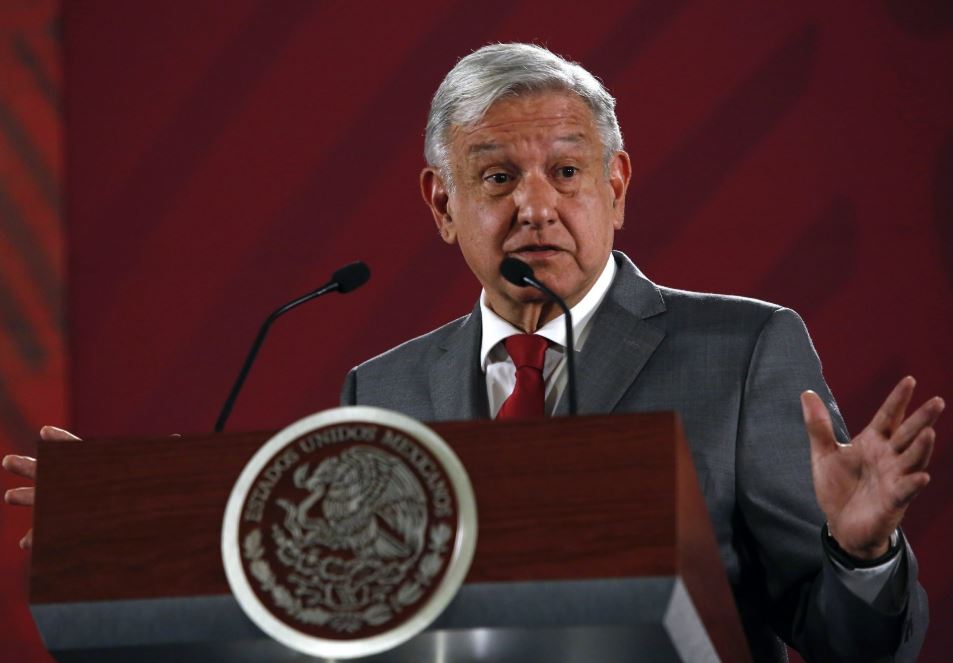 Mexico's President Andrés Manuel López Obrador says Mexico will not respond to US President Donald Trump's threat of coercive tariffs with desperation, but instead push for dialogue, during his daily morning press conference at the National Palace, in Mexico City, Friday, May 31, 2019. (Photo: AP)

Mexico President Andrés Manuel López Obrador said Friday that Mexico won’t respond to US President Donald Trump’s threat of coercive tariffs with desperation, but instead will push for dialogue.

A day after Trump’s threat to impose a 5% tariff — that could increase incrementally to 25% — on all Mexican imports, López Obrador seemed convinced that Trump just needed to be informed of all that Mexico has been doing to slow illegal migration, and he dispatched Foreign Affairs Secretary Marcelo Ebrard to Washington Friday.

“We are carrying out our responsibility in immigration policy,” López Obrador said at his daily morning news conference. He made no promises of new action to stem the flow of mostly Central American immigrants transiting Mexico to reach the US border.

Mexico has stepped up raids on migrant caravans travelling through the southern states of Chiapas and Oaxaca this year. It has deported thousands of migrants and frustrated thousands more who wait endlessly for permits that would allow them to travel legally through Mexico.

“We have to help so that they don’t enter the United States illegally, but we also have to do it respecting human rights,” López Obrador said. “Nothing authoritarian. They’re human beings.”

Since taking office Dec. 1, López Obrador has espoused a longer term immigration fix focused on raising living standards and increasing opportunities so that those who he says are forced to migrate no longer have to.

On Friday, he also noted that most of the immigration flow is not Mexican, but rather citizens of Central America’s Northern Triangle countries, Honduras, Guatemala and El Salvador. He referred to those countries’ “crises” of unemployment and violence as being the main drivers of illegal immigration.

López Obrador has lobbied the US government and other countries to support a Marshall Plan-like development agreement focused on development in southern Mexico and the Northern Triangle.

But his medium- and long-term immigration solutions are colliding with the potential short-term benefits for Trump of rallying his base during an election cycle with incendiary threats.

On Friday, Trump resumed his Twitter complaints, writing: “Mexico has taken advantage of the United States for decades. Because of the Dems, our Immigration Laws are BAD. Mexico makes a FORTUNE from the US, have for decades, they can easily fix this problem. Time for them to finally do what must be done.”

Mexico can continue to make it more difficult for migrants to cross the country to the US border, though the smugglers who have plied those routes for decades would benefit from a crackdown. But sealing Mexico’s southern border with Guatemala is likely impossible. It doesn’t have the infrastructure to adequately patrol a border that includes a river passing through jungle.

López Obrador has said before that Mexico can expect to take some hits from the Trump administration as the US elections near.

On Thursday, Trump tweeted: “On June 10th, the United States will impose a 5% Tariff on all goods coming into our Country from Mexico, until such time as illegal migrants coming through Mexico, and into our Country, STOP. The Tariff will gradually increase until the Illegal Immigration problem is remedied.”

The economic impact for Mexico was swift. The peso dropped more than 3% against the US dollar by Friday morning.

Mexico’s Banco Base warned that the announced tariffs pose a grave threat for Mexico’s economic growth outlook since 80% of its exports go to the United States.

It estimated that the 5% tariff could knock 2.85 percentage points off the growth of Mexico’s exports, but that the weaker peso would help compensate.

Trump’s threat came the same day that Mexico’s government announced it would begin the ratification process of the new agreement with the United States and Canada to replace the North American Free Trade Agreement and less than two weeks after Mexico successfully negotiated the lifting of steel and aluminum tariffs from the US that had been a roadblock to ratifying the new trade deal. The United States-Mexico-Canada Agreement was one of the Trump administration’s most touted achievements, but is now once again in jeopardy.

López Obrador said that since Thursday night, he had been receiving messages of support from all sectors of Mexican society and felt great solidarity.

Asked by a reporter why Mexico would not just skip the dialogue and file a complaint with an international trade body, López Obrador said it was not just a legal question. “We want to have a good relationship with the United States government.”