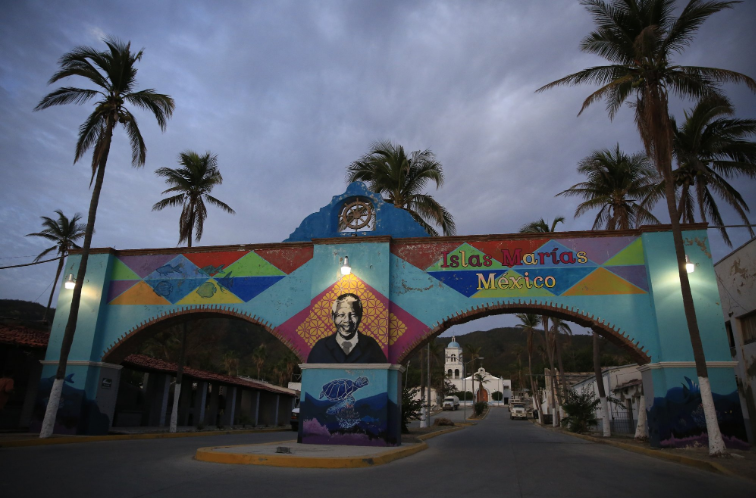 A mural of Nelson Mandela, who spent many of his imprisoned years in an island prison in South Africa, adorns a gate in front of the dock where prison staff and inmates arrive in Navy boats to the now closed Islas Maria penal colony located off Mexico's Pacific coast, at dawn Sunday, March 17, 2019. Islas Marias was the last of its kind, the final of a half dozen island penal colonies that were scattered around Latin America. (Photo: AP)

It’s unclear if Islas Marias ever really worked as a penal colony: The remote Mexican archipelago is battered regularly by hurricanes, and its ramshackle, often century-old installations are sprinkled with the ruins of failed “productive” projects that once aimed to make the prison population self-sustaining.

Now, with the prison just closed, the hurdles of distance, weather and decayed infrastructure may not make it easy for the islands to prosper in their new role as a nature center and education camp for children.

It’s a rough, eight-hour boat ride out to the islands, which lie 70 miles (110 kilometers) off the Pacific shores of Mexico’s Nayarit state. Appropriately for a place where most of the few dozen prisoners who attempted to escape drowned, the Environment Department says it is thinking about offering survival courses. Bird watching, nature walks and arts programs are also planned.

All that remains for now are a few goats, some cattle and once-domesticated cats that roam the main island where thousands of prisoners once lived.

The thick-walled remains of an old salt-evaporation warehouse and the disused pools of a former shrimp farm are a mute testament to the idea that Islas Marias was founded on in 1905 — that penal colonies could earn their keep, and reform inmates through clean living, ocean air and hard work.

Bars and cells weren’t necessary because the surrounding ocean effectively prevented escape. Islas Marias was the last of its kind, the final of a half dozen island penal colonies that were scattered around Latin America. It was done in by high costs — almost $150 per day per inmate, far beyond what mainland prison costs — and by the increasing space available at mainland prisons as legal reforms reduced jail populations.

Rogelio Zedillo, a former employee in the island’s legal area, is one of the believers in the penal colony. Some of his fellow prison employees even want to stay on and are trying to swing transfers to the Environment Department, which will now oversee the islands.

“I think it’s a pity that they have closed what could have been a model prison,” Zedillo said. “They were self-supporting, they (inmates) were producing. They grew vegetables. They had cattle, goats, pigs. There was a fish farm and a salt works ... the problem was political, the authorities decided not to continue as a penal colony, and so little by little it fell apart.”

Prison official Marco Antonio Rugerio Estrada spent the past 31 years on the main island, known as Maria Madre. He also is sad to see the prison go.

“It was a very healthy life,” Rugerio Estrada said. “We started off every day in a very beautiful environment, and that allows you to see life in a different way. You wake up and say, ‘I am in a very pretty place,’ and you start to recognize yourself.”

But it was far from a tropical paradise for the inmates. They weren’t allowed to go the island’s beaches. They led a fairly regimented life, with designated areas, bunk beds in small houses and 5 a.m. morning wake-up calls.

Officials say inmates also brewed homemade liquor out of fermented fruit and some tried to grow marijuana. The moonshine, known on the island as “turbo,” led to a ban on the possession of sugar by inmates, since it accelerated the fermentation process.

The prison was started as a way to isolate and punish political prisoners, such as striking workers and socialists, and the inmates helped pay its way by working on the salt flats or at the shrimp farm. But in its waning years, salt could be harvested from evaporation ponds on the mainland more cheaply, and transportation costs for the island’s shrimp production made it less profitable.

A further blow was the decision in 2006 during Mexico’s drug war to turn the colony into a regular prison holding as many as 8,000 to 10,000 inmates. The “semi-freedom” the island once offered inmates, and the production schemes, suffered under the influx. The overcrowded, under-fed inmates rioted in 2013, killing six people before marines regained control of the island.

A final blow came this past October, when Hurricane Willa made a direct hit as a Category 3 storm and caused about $100 million in damages to the prison. Buildings can be seen around the island with their roofs torn off.

When it closed in February, the penal colony housed just 659 prisoners.

One of the most charming of the prison’s features — that families, including children, could come live with some inmates — also proved one of its most costly burdens. And people worried whether the kids were getting a decent childhood on the island and questioned the cost of providing schooling and recreational facilities.

“There are a lot of people in the non-prison population who deserve that funding, to live a decent life,” said Francisco Garduno Yanez, director of Mexican prisons who was assigned with the task of shutting down the penal colony.