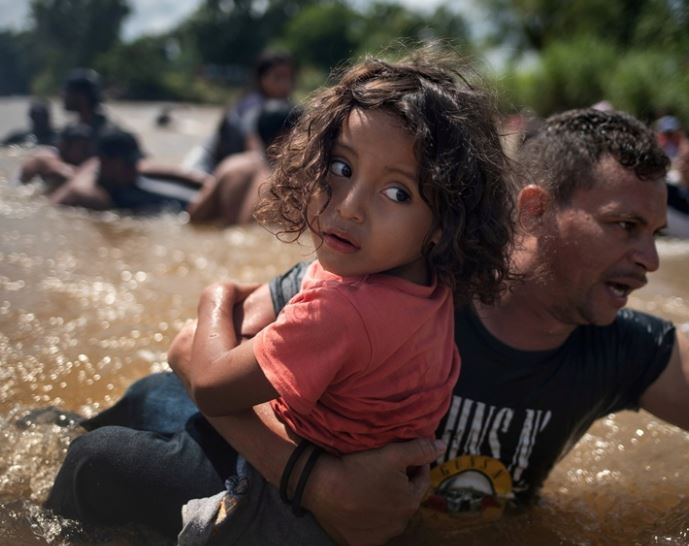 Luis Acosta holds 5-year-old Angel Jesus, both from Honduras, as a caravan of migrants from Central America en route to the United States crossed through the Suchiate River into Mexico from Guatemala in Ciudad Hidalgo, Mexico, Oct. 29, 2018. (File photo: Xinhua)

Mexico will seek support from the international community to curb the flow of migrants to the United States, Mexican Foreign Minister Marcelo Ebrard said Friday. "We want to bring it to the table and we want the US to make its part, but we also are going to invite the international community," Ebrard told reporters. Particularly, Mexico would seek support from United Nations agencies such as the Economic Commission for Latin America and the Caribbean (ECLAC), he said. "What we want now is for the United Nations ... to participate and to help us," he said. All parties involved in the crisis should share responsibilities, he added. "There are two parts here -- a flow driven by poverty and a huge business that generates $6 trillion a year, so we have to offer short-term options to those families. That is the plan," Ebrard said. A Central American migrant pays smugglers between $3,500 and $7,000 to cross into the United States, which means that in a single day they can earn some $20 million, said Ebrard. On June 7, the Mexican and US governments reached an agreement to reduce the number of migrants from Central America. The agreement suspended the implementation of tariffs that US President Donald Trump threatened to impose on all Mexican imports beginning on June 10. Under the deal, Mexico promised to increase its efforts to reduce undocumented immigration, and strengthen the deployment of its recently created National Guard. The flow of Central American migrants fleeing poverty and crime has increased since the end of 2018, with caravans of thousands crossing Mexico, mainly on foot, to reach the US border.