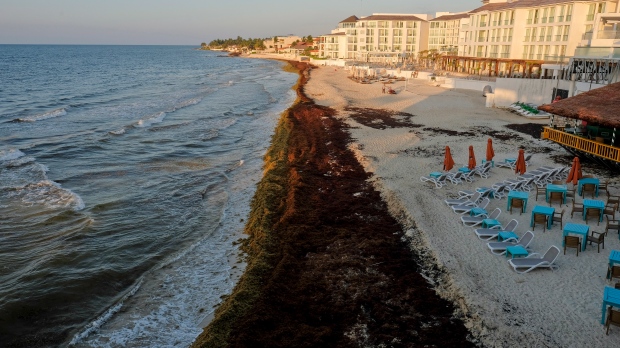 Sargassum seaweed covers the beach in Playa del Carmen, Mexico, May 8, 2019. Experts say the presence of sargassum seaweed is the new normal and residents are going to have get used to it. (Photo: AP)

Mexico has spent $17 million to remove over a half-million tons of sargassum seaweed from its Caribbean beaches, and the problem doesn’t seem likely to end any time soon.

The floating mats of algae seldom affected the famed beaches around Cancun until 2011, but they’re now severely affecting tourism.

Initial reports suggested the saragassum originated (in Amazon-fed seas?) off the northern coast of Brazil. But experts at an international conference on sargassum Thursday say other causes contribute.

Other causes included upwelling of nutrient-laden ocean water and dust blowing in from Africa.

Johnson is a senior researcher at the University of Southern Mississippi Gulf Coast Research Laboratory.