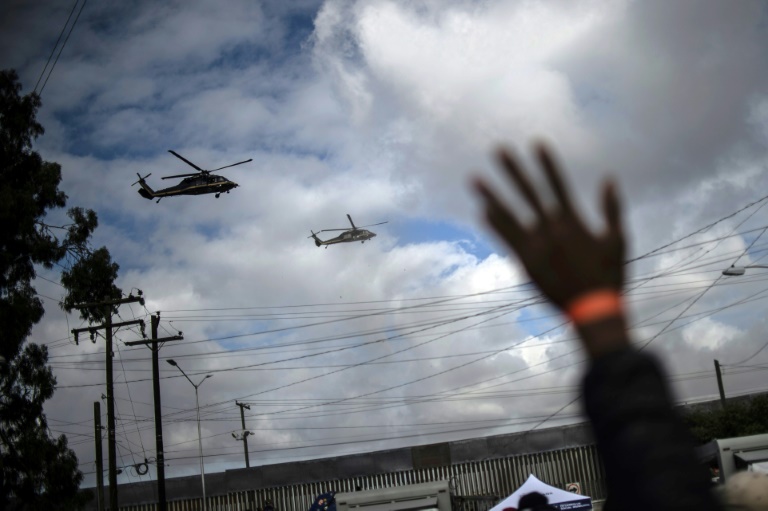 President Donald Trump has announced that asylum seekers hoping to enter the US will have to wait in Mexico while they are assessed (Photo: AFP)

Asylum seekers hoping to enter the US via its southern border will have to wait in Mexico while they are assessed, President Donald Trump announced Saturday, appearing to confirm a report about a bilateral deal published by The Washington Post.

The move was cautiously welcomed by some refugees currently at the border, even as Mexico's incoming interior minister Olga Sanchez Cordero, who was quoted by the Post as confirming the agreement, later issued a denial.

"Migrants at the Southern Border will not be allowed into the United States until their claims are individually approved in court," Trump wrote on Twitter.

He added that the US "will allow those who come into our Country legally" and emphasized: "All will stay in Mexico."

The deal, which would overhaul US border policy, comes with Trump outraged over the presence of thousands of Central American migrants who marched to Mexico's border city of Tijuana hoping to enter the US for a better life free from the poverty and gang violence in their homelands.

"For now, we have agreed to this policy of Remain in Mexico," the Post quoted Sanchez Cordero as saying. The government of new President Andres Manuel Lopez Obrador will enter office on December 1.

But her office later issued a statement saying: "There is no agreement of any type between the future federal government of Mexico and that of the United States of America."

Trump has sent almost 6,000 soldiers to the Mexican border in support of Customs and Border Protection agents and National Guard troops already there, to forestall what Trump has called an "invasion" by "very bad people."

After a trek of more than a month from Honduras, nearly 5,000 migrants -- including women and children -- are now in Tijuana living in a makeshift shelter.

Trump "is within his right. He is in his government," but he is not like other presidents in his views of migrants, said a resident of the shelter, Carolina Flores, 38, of Honduras.

"He sees us as a bug that is going to eat there," she added. "We come for an opportunity!"

Another Honduran in the shelter, Orlinda Morales, 31, a housewife, said the reported new asylum rules seem "very good" because migrants will not be in limbo. "We will get work here," she said

Hundreds of the migrants lined up this week at a special jobs fair set up for them in the manufacturing city, but others remain determined to reach the US.

No formal agreement has been signed, the Post said, but US officials view the deal, which would see would-be refugees' cases heard by US courts in Mexico, as a potential breakthrough in deterring migration.

US asylum officers will begin implementing the new procedures in coming days or weeks, Homeland Security officials cited by the Post said.

Asylum seekers will be given an initial screening to determine whether they face imminent danger by staying in Mexico, where violence is widespread.

Deportation to the homeland

American officials will be able to process at least twice as many asylum claims under the new system because they would not be limited by detention space at US ports of entry, the Post report said.

It added that under the new rules, an applicant whose asylum claim is denied would not be allowed to return to Mexico but would remain in US custody pending immediate deportation to his or her home country.

In a statement issued on Thursday, Secretary of State Mike Pompeo made no mention of a deal but said that he and Homeland Security Secretary Kirstjen Nielsen had "a constructive meeting" with Mexico's future foreign minister Marcelo Ebrard over the caravans.

"We have affirmed our shared commitment to addressing the current challenge. The caravans will not be permitted to enter the United States. There are real dangers to the safety and human rights of migrants from those who would prey on them," Pompeo said.

He added that he was looking forward to working with Mexico's new government, including on ways to spur job creation "to benefit the government and people of Mexico."

In 2018, border patrols registered more than 400,000 illegal crossers, according to Homeland Security, and in the last five years, the number of those requesting asylum has increased by 2,000 percent.

Less than 10 percent of cases result in asylum being granted, the government says.

Last week, a US federal judge temporarily blocked the Trump administration from denying asylum to people who enter the country illegally.

The president issued a proclamation earlier this month saying that only people who enter the US at official checkpoints -- as opposed to sneaking across the border -- can apply for asylum.