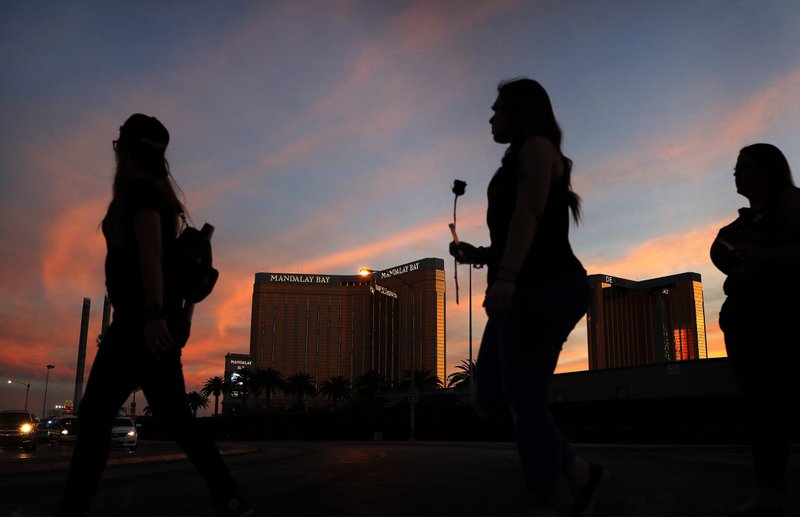 People carry flowers as they walk near the Mandalay Bay hotel and casino during a vigil for victims and survivors of a mass shooting in Las Vegas April 1, 2018. (Photo: AP)

Casino giant MGM Resorts told federal regulators Thursday it might pay up to $800 million to settle liability lawsuits stemming from the 2017 mass shooting in Las Vegas — the deadliest in modern US history.

“The company believes it is reasonably possible that a settlement will be reached” by next May, it told the Securities and Exchange Commission in a quarterly report.

MGM Resorts also said it has $751 million in insurance to pay toward a settlement.

However, a lawyer handling mediation talks for plaintiffs called it premature for the corporate owner of Mandalay Bay resort to report a possible settlement range between $735 million and $800 million.

“Not even close,” attorney Robert Eglet said about the amount disclosed by MGM Resorts.

He said he represents about 4,200 claimants, including those who have sued in Nevada, California and other states, and people who have not formally filed for damages.

“It’s true that a settlement is possible,” Eglet said. “But I will tell you it’s not probable. Nothing is signed. We have a long way to go before we have an agreement.”

Eglet said talks are ongoing with MGM Resorts attorneys, and that he was aware the company would make its report to the SEC.

Eglet said he reviewed the SEC document on Thursday and agreed that a settlement needs to be reached within a year.

Company spokeswoman Debra DeShong said progress has been made after multiple mediation sessions over several months.

The goal is “to resolve these matters so that all impacted can move forward in their healing process,” she said.

MGM Resorts has defended itself against liability claims, outraging victims last summer when it filed lawsuits against more than 1,900 people in a bid to consolidate claims in one federal court.

The plaintiffs are seeking compensation for a range of physical and psychological harm after a shooter rained gunfire from a Mandalay Bay suite into an open-air concert crowd, killing 58 people and injuring more than 800.

They accuse MGM Resorts, which owns the high-rise hotel and owned the concert venue across Las Vegas Boulevard, of failing to adequately protect the 22,000 people attending the Route 91 Harvest Festival.

They point to findings that the shooter, Stephen Paddock, spent several days amassing an arsenal of assault-style weapons and ammunition in the two-room suite.

Police and the FBI say he acted alone, firing out the windows with guns equipped with rapid-fire bump stocks then killing himself before officers reached his room. Paddock didn’t leave a note or a manifesto, and authorities closed investigations saying they didn’t identify a motive.