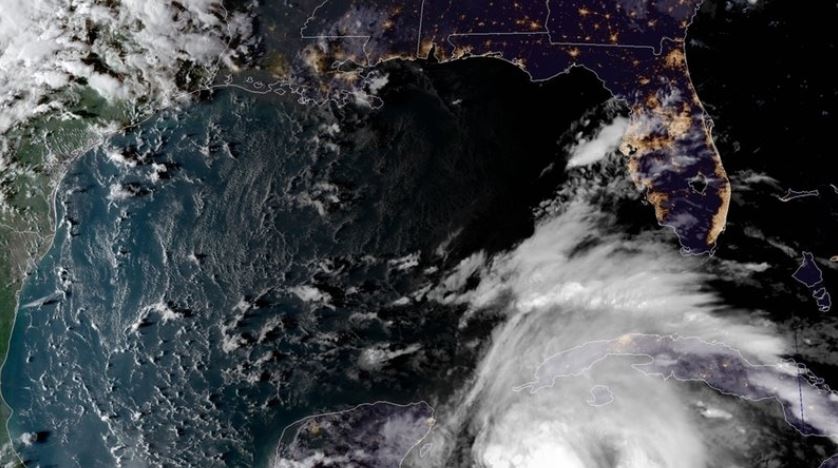 This satellite image provided by the National Oceanic and Atmospheric Administration shows a view of Tropical Storm Michael, lower right, churning as it heads toward the Florida Panhandle, Sunday, Oct. 7, 2018, at 6:52 p.m. Eastern Time. (Photo: NOAA via AP)

A tropical weather system that rapidly strengthened into Hurricane Michael on Monday is likely to keep growing stronger ahead of an expected strike on Florida’s Panhandle by midweek, forecasters said.

Michael could strengthen into a major hurricane with winds topping 111 mph (178 kph) by Tuesday night before an expected strike Wednesday on the Panhandle or Big Bend, according to the National Hurricane Center.

Since the storm will spend two to three days over the Gulf of Mexico, which has very warm water temperatures and favorable atmospheric conditions, “there is a real possibility that Michael will strengthen to a major hurricane before landfall,” Robbie Berg, a hurricane specialist at the Miami-based storm forecasting hub, wrote in an advisory.

Michael’s large size, strong winds and heavy rains could produce hazardous flooding along a stretch of Florida’s Gulf coast with many rivers and estuaries where seawater pushed ashore by a hurricane could get trapped, said Hurricane Center Director Ken Graham.

“This is a part of the Gulf of Mexico that is incredibly vulnerable to storm surge,” Graham said.

Parts of Florida’s curvy Big Bend could see up to 12 feet (3.5 meters) of storm surge, while Michael also could dump up to a foot (30 centimeters) of rain over some Panhandle communities as it moves inland, forecasters said.

A large mound of sand in Tallahassee was whittled down to a small pile within hours as residents filled sandbags to prepare for potential flooding. A couple breweries in the city offered free filtered water to anyone bringing in growlers, jugs or other containers.

“All indications are that it’s going to be severe,” said City Commissioner Gil Ziffer, adding that if the storm hits Florida’s capital, there would be significant tree damage and power outages. “Hopefully we will have no one hurt and no loss of life.”

Two years ago, Hurricane Hermine knocked out power for days in Tallahassee and caused widespread flooding as it came up through the Gulf Coast. Ann Beaver was among the three-quarters of city residents who lost electricity after that storm, and she was preparing Monday for a similar experience.

“I don’t want to lose everything in the freezer, but it is what is,” said Beaver as she loaded sandbags into her family’s pickup truck.

Tallahassee Mayor Andrew Gillum, who is the Democratic nominee for governor, had planned to campaign in South Florida on Monday and Tuesday, but he said he would return to the city to help with storm preparations.

Farther west along Florida’s Panhandle, the city of Pensacola tweeted to residents, “Be sure you have your emergency plan in place.”

The storm was centered about 50 miles (80 kilometers) off the western tip of Cuba, and about 140 miles (220 kilometers) east-northeast of Cozumel, Mexico. It was moving north around 7 mph (11 kph).

Michael was lashing western Cuba late Monday morning with heavy rains and strong winds, according to the hurricane center. Forecasters warned that the storm could produce up to a foot (30 centimeters) of rain in western Cuba, potentially triggering flash floods and mudslides in mountainous areas.

Florida Gov. Rick Scott issued an order for a state of emergency for 35 counties, from the Panhandle through to Tampa Bay, to rush preparations, freeing up resources and activating 500 members of the Florida National Guard.