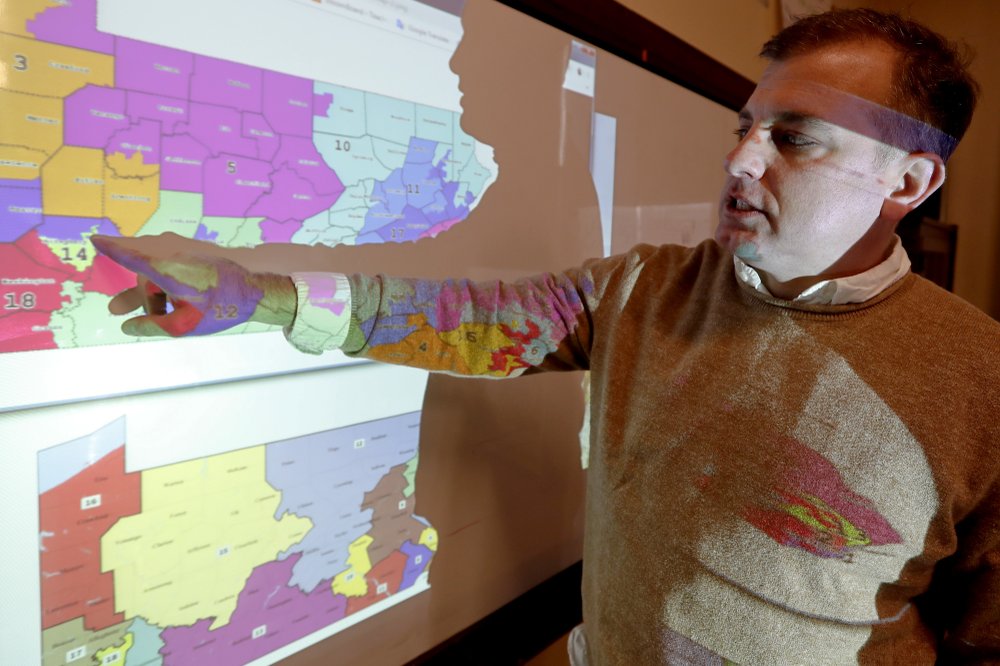 William Marx, points to projected images of the old congressional districts of Pennsylvania on top, and the new re-drawn districts on the bottom, while standing in the classroom where he teaches civics in Pittsburgh on Friday, Nov. 16, 2018. (Photo: AP)

With an election looming, courts earlier this year declared congressional districts in two states to be unconstitutional partisan gerrymanders. One map was redrawn. The other was not.

The sharply contrasting outcomes that resulted on Election Day in Pennsylvania and North Carolina illustrate the importance of how political lines are drawn — and the stakes for the nation because that process helps determine which party controls Congress.

“We did everything we could,” Democrat Kathy Manning said. “But we just could not overcome the gerrymandering, and that’s the way the district was designed to run.”

Manning held more than 400 campaign events, contacted tens of thousands of voters and had outspent the Republican incumbent in North Carolina’s 13th District — but still lost by 6 percentage points in a district Republicans drew to favor their candidates.

Partisan gerrymandering has been carried out by both Democrats and Republicans throughout US history. But an Associated Press statistical analysis based on 2016 election data found that more states had Republican-tilted districts than Democratic ones. Some of the largest GOP congressional advantages were in North Carolina and Pennsylvania, where Republicans fully controlled redistricting after the 2010 Census.

One of the Democrats’ biggest edges was in Maryland, where they were in charge of the last redistricting.

A follow-up AP analysis using preliminary 2018 election data shows the Republican statistical edge was cut in half under Pennsylvania’s new court-ordered congressional map but grew even larger in North Carolina.

Though an increasing number of states have adopted independent commissions, many states still rely on lawmakers and governors to draw legislative and congressional districts. Republicans controlled that process in far more states than Democrats because of their electoral success nationwide in 2010. Those maps were in place for the Nov. 6 elections, except in places where courts ordered them redrawn, and will be again in 2020.

The results have national implications: Democrats potentially could have won even more seats in the US House and state legislatures had it not been for Republican gerrymandering.

North Carolina is a prime example of gerrymandering’s consequences.

Republicans and Democrats in this month’s elections split the total votes cast for major party candidates in the state’s 13 congressional districts about evenly, with Republicans getting 51 percent (a figure that is slightly inflated because one GOP incumbent ran unopposed). Yet Republicans won 10 of those races, about three-quarters of the total seats.

That equates to a pro-Republican tilt of nearly 26 percent under an “efficiency gap” analysis that provides a statistical way of measuring the partisan advantages that can stem from gerrymandering. That figure was up from about 20 percent in 2016.

By comparison, Democrats in Pennsylvania received 54 percent of this year’s total two-party vote for congressional candidates, including one race where a Democratic incumbent ran unopposed. Democrats and Republicans each won 9 seats under a map drawn by the Democratic-tilted state Supreme Court with the assistance of an outside expert.

That marked a significant shift from the 13-5 Republican majority in the state’s congressional delegation during the three previous general elections under a map that had been enacted in 2011 by the Republican-led Legislature and governor.

Pennsylvania’s pro-Republican “efficiency gap” fell from 16 percent in the AP’s 2016 analysis to 7 percent under this year’s court-drawn map — a level that some political scientists attribute to the high concentrations of Democrats in urban areas that make it more difficult for them to win elsewhere.

The Pennsylvania Supreme Court redrew districts after it ruled that partisan gerrymandering in the old map infringed on a state right to “free and equal” elections. One of the Democrats who sued was Bill Marx, a high school civics teacher in Pittsburgh who said he feared that legislative gerrymandering was building apathy and cynicism in the next generation of voters.

Marx said he believes the new district boundaries resulted in “a more fair congressional representation of the will of the people in Pennsylvania.”

But Pennsylvania Republican Party spokesman Jason Gottesman said the new map “put Democrats at an unfair advantage in this election.” Republicans contend the court overstepped its powers by adopting new districts, a duty that belongs to the Legislature.

“The Pennsylvania Supreme Court robbed us of at least three to four congressional seats that we might not have lost if the redistricting would not have happened the way that it did,” Gottesman said.

While Republicans are fuming in Pennsylvania, Democrats remain frustrated in North Carolina. There, the GOP-drawn congressional boundaries pack Democratic voters into three highly concentrated districts. Republicans are spread more evenly across the other 10 districts.

Republicans “have gerrymandered the heck out of lots of different places,” said Democratic voter Melinda Wilkinson, a retired music teacher from Raleigh. She added: “It seems very unfair.”

Republican state Rep. David Lewis, who helped shepherd the congressional map through North Carolina’s GOP-led General Assembly, acknowledged politics played a role in the districts but said there is no evidence that Democratic voters were prevented from “fully participating and exercising their right to choose the candidates of their choice.”

In August, federal judges ruled that North Carolina’s congressional districts violate protections for Democratic voters but determined there wasn’t enough time to redraw them before the Nov. 6 elections. The US Supreme Court is considering whether to hear an appeal in that case.

For state legislative districts, the AP’s analysis has found some of the largest partisan advantages in Michigan and Wisconsin. Democrats won 52 percent of the total major party vote for the Michigan House this year and flipped several Republican-held districts, yet Republicans still won 53 percent of the seats.

In Wisconsin, a federal judicial panel invalidated the state Assembly districts as an unconstitutional partisan gerrymander in 2016. But the US Supreme Court overturned that in June and sent the case back to the lower court to establish whether there was harm to particular voters. A new trial is set for April.

Preliminary results from the 2018 elections show Wisconsin Democrats received 54 percent of the total votes cast for major party Assembly candidates — a figure inflated by the fact that Democrats ran unopposed in 30 districts compared to just eight for Republicans.

Yet Republicans won 63 of the 99 Assembly seats, just one less than their pre-election majority. That marks an increase in the pro-Republican “efficiency gap” from about 10 percent in 2016 to almost 15 percent this year. Democrats also won or are leading in elections for all of Wisconsin’s statewide offices, showing voter support for their candidates in races that are not affected by gerrymandering.

Republican Assembly Speaker Robin Vos called it a “faulty premise” to say that Republicans’ legislative majority is due to gerrymandering.

“We are the ones who have been given a mandate to govern,” Vos said.

Wisconsin Progress, an organization that recruits and trains liberal candidates, said 30 of the 31 Democratic candidates it backed in Republican-held Assembly districts ended up losing in the Nov. 6 elections.

“No matter what happens, no matter who’s in the White House or what the national trends are or how much money you have, you just can’t beat gerrymandered seats,” said Eric Couto, executive director of Wisconsin Progress. “That’s the whole point of gerrymandering.”