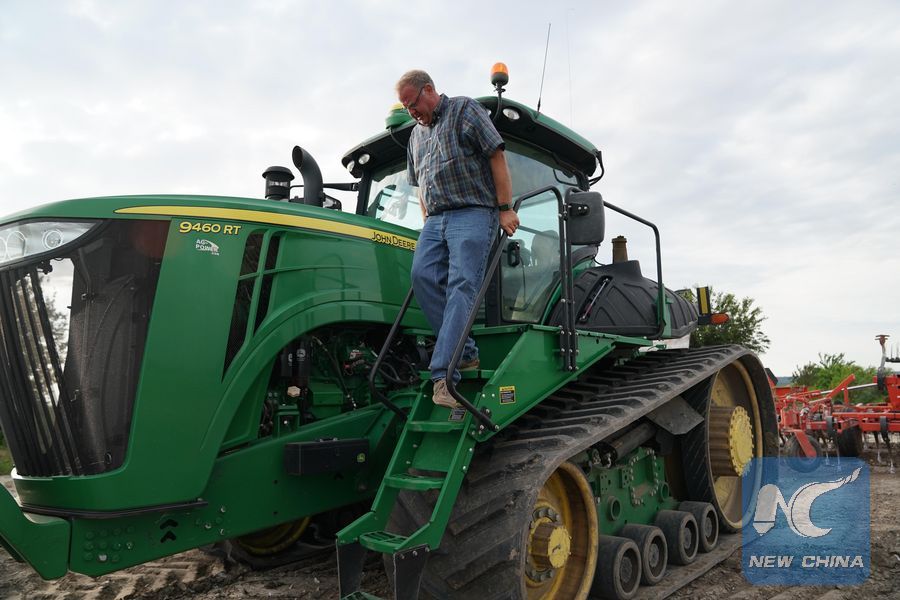 Tom Waters, a seventh-generation farmer, comes down from his tractor on his farmland in Orrick, Missouri, the United States, on June 9, 2019. (Photos: Xinhua)

Waters and his family farm about 3,500 acres of land in Orrick, Missouri, a small town east of Kansas City. Among his nearly 1,700-acre rain-soaked fields, 900 acres were swallowed by the surging Missouri River when a levee broke on June 1 and are still up to 15 feet (4.5 meters) below water.

He had planted a few acres of corn, with the rest intended for soybeans, but "it's just gone now," Waters told Xinhua, estimating the loss to be "several hundred thousand dollars."

When the flood hit, Waters had to move out some 60,000 bushels of soybeans in storage, and sold them at "a pretty low price," about $3 a bushel off the normal price prior to the US-China trade tensions. "That's a lot of dollars difference for us," he said.

"This is just been rain after rain before it even dries out it rains again. It's been week after week after week like that," said Waters, who has been farming for over 40 years in this area, adding that the persistent wet weather is a "very rare event."

Noting that reservoirs up in Montana, North Dakota and South Dakota still have too much water to dump, the seasoned farmer worried that "the river is going to be high all the rest of spring and through summer, so chances are we won't get any of this (flooded land) planted this year." 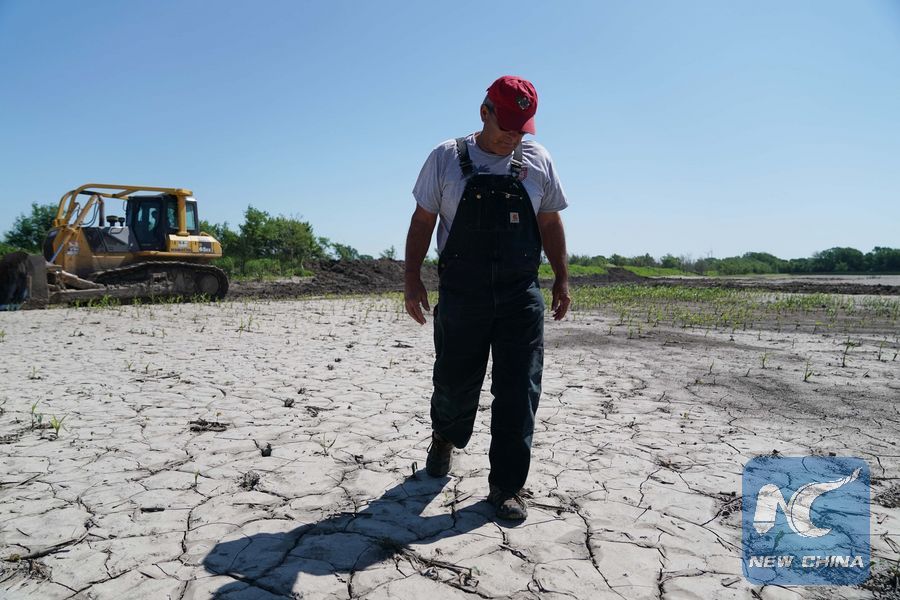 Blake Hurst, president of the Missouri Farm Bureau, walks on his rain-soaked fields in Tarkio, Missouri, the United States, on June 10, 2019.

Blake Hurst, president of the Missouri Farm Bureau, also a corn and soybean farmer in Tarkio, northwest Missouri, told Xinhua that he saw similarly catastrophic floods in this area in 1993, but such a widespread severe flooding throughout the Midwest is the worst he can remember.

"The last 12 months, in the center part of the United States, have been the wettest 12 months on record," said Hurst, who has about 500 acres of land under water, noting that the relentless rain since late March has contributed to significant planting delays.

In the biggest corn-producing states, farmers had planted 83 percent of corn acreage by Sunday, compared with a five-year average of 99 percent, according to the latest data from the US Department of Agriculture (USDA).

Hurst, who also has 40-plus years of farming experience, said corn should ideally be planted by the first week of May, and a one-month delay could cut the normal yield by roughly 20 percent, as there might not be enough time for it to mature before the frost hits the ground.

The seemingly relentless rain in the Midwest has left farmers drowning in frustration. On top of that, many growers have been bearing the brunt of the US-initiated trade dispute with China, struggling with financial hardship and facing an uncertain future.

"We've seen a big cut in our (soybean) exports to China because of the trade tension, and that's caused prices to drop," Hurst said, adding that several months of trade frictions have "made a big difference" to farmers' income.

Noting that the United States has had five years of above average crop yields, Hurst said that already led to an oversupply. A decline in exports to China, caused by the trade tensions and compounded by the African swine fever outbreak, has worsened the situation, he said.

"It's just a combination of all of them that has really made farming kind of difficult this year," Hurst said. "It just keeps on and coming."

Tom Waters, a seventh-generation farmer, speaks during an interview near his rain-soaked fields in Orrick, Missouri, the United States, on June 9, 2019.

For Waters, a combination of circumstances has made planning nearly impossible. "I think this has been the hardest year to make decisions for me since I've been farming," he said.

Waters said it has been stressful to wait for a resolution to the trade dispute. "You keep thinking, well maybe tomorrow, maybe tomorrow, then you hear a little bit of good news and maybe the price bumps up a little bit and then that blows up and it goes back down. So it's just been difficult," he said.

Hurst, who farms 6,000 acres of land with his family, usually plants corns on half of the acreage and soybeans on the other half. Earlier this year, he had planned to plant 5 to 10 percent more corn because of the trade dispute and lower demand for soybeans. The unusual wet spring, however, makes that goal unfeasible.

"Now, anybody that's shifting will shift to soybean simply because it's too late for corn," Hurst said, adding that if soybeans don't get planted by next week, farmers will start to lose yield as well. 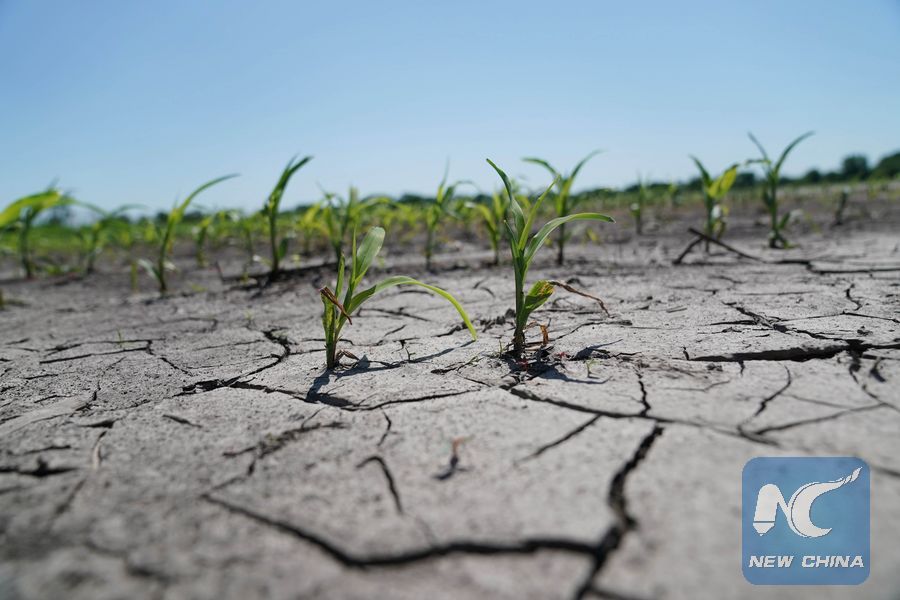 However, the USDA data shows that growers in the major soybean-producing states had only planted 60 percent of acreage by Sunday, far below a five-year average of 88 percent.

Speaking of the newly approved disaster relief bill and the new round of trade aid package, Hurst urged the administration to announce detailed rules of these programs quickly so that farmers can better plan.

Noting that it took the Congress months to pass the disaster relief bill, Waters said he doesn't expect to receive any money until weeks later. Still, he prefers a stable market rather than a trade aid package.

"The question has to be, are we losing these markets permanently?" Hurst said, noting that trade tensions in some ways make the United States "not a dependable supplier" for soybeans.

"Obviously we're going to put tariffs on you. We're going to announce tariffs in a tweet. So they can happen at any time. So if I'm a grain buyer anywhere in the world, I'm looking for a supplier I can trust, and we're no longer that supplier," he said. "We'll be paying for this for years."

Waters said he hopes "we can get back to pick up where we left off before all this tension started."

"I still have hope that we can get it ironed out," he struck an optimistic tone.