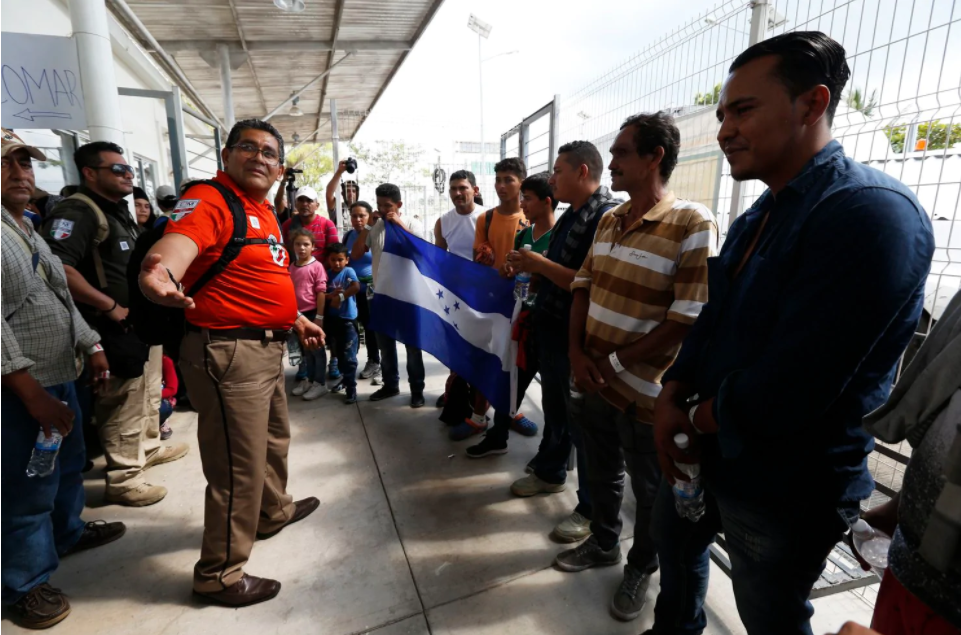 A Mexican immigration official welcomes a group of migrants as they cross the border into Mexico from Guatemala, near Ciudad Hidalgo, Chiapas State, Mexico, Thursday, Jan. 17, 2019. Hundreds of Central American migrants are walking and hitchhiking through the region as part of a new caravan of migrants hoping to reach the United States. (AP)

People simply showed identification bracelets given to them by Mexican officials and walked into the border town of Ciudad Hidalgo. They crossed over the same border bridge where another caravan clashed with Mexican police in October, when migrants tried to push through closed gates and ranks of riot police, leading authorities to fire pepper spray.

Mexico has promised to allow people through as long as they are orderly.

As in October, there are a lot of children in the latest caravan.

Yolanda Sanchez, 28, said she left Colon, Honduras, with her four children. She carried her youngest, a baby just shy of his first birthday. She is travelling with a cousin, her husband and their four children.

They hope to reach the United States, to escape poverty after her husband lost his job.

“We know that it is going to be difficult, but we just can’t survive anymore” in Honduras, she said.

Previous estimates put the caravan at about 1,800 people, including about 100 from El Salvador. But many of the migrants were still travelling through Guatemala, and it was difficult to say how big the caravan would be once it began making its way through southern Mexico.

Julia Escalon, 43, of the Honduran city of San Pedro Sula, rested under the shade of a tree on the Guatemalan side, cradling her 2-year-old daughter in her arms. Escalon brought along a total of four daughters on the trip.

“In San Pedro, we have nowhere to live. We can’t even afford to rent a place,” Escalon said. “I’m going to fulfil my dream and get to the United States.”

However, that may not be easy. The border city of Tijuana was saturated by the first caravan in November, testing the patience of the city’s residents, and Mexico’s new government has since agreed to house third-country migrants while their asylum claims are heard in the United States.