Migrant caravan reaches US border, as barbed wire goes up 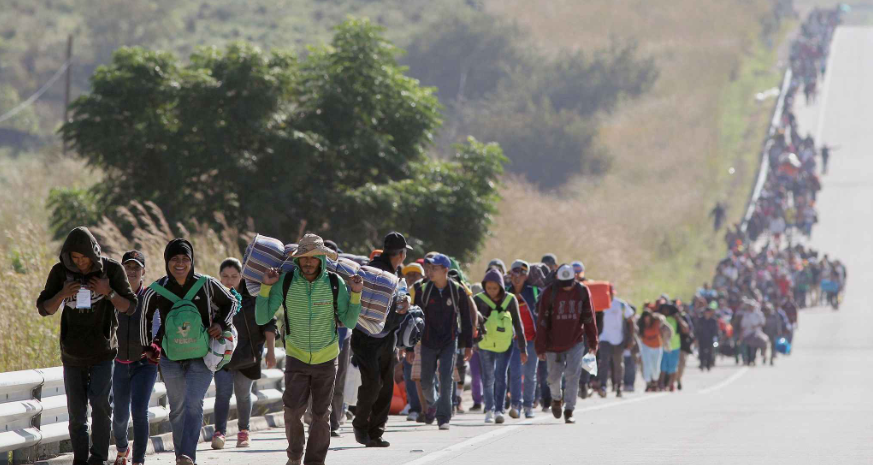 Migrants, part of a caravan of thousands trying to reach the US, walk along the road between Zapopan and Tequila in the Mexican state of Jalisco, November 13, 2018. (Photo: CGTN)

The first migrants from a so-called caravan that has been traveling across central America for a month reached the US border on Tuesday, as the American military put up barbed wire and barricades in what has become a hot political issue.

Some 400 migrants who broke away from the main caravan in Mexico City arrived in the border city of Tijuana on Tuesday by bus, according to a Reuters witness.

The caravan, which currently has around 5,000 migrants, set out from the city of San Pedro Sula in Honduras on October 13, fleeing poverty and violence – and finding itself on the receiving end of a flood of anti-immigrant attacks from US President Donald Trump.

On Wednesday, Defense Secretary Jim Mattis said he will travel to the US border area, his first visit since the military announced the deployment of over 7,000 troops there.

As the first migrants reached Tijuana, around 38 kilometers from San Diego, California on Tuesday, the US Customs and Border Protection (CBP) said it would close lanes at two crossings to allow the Department of Defense to install barbed wire and position barricades and fencing.

Trump turned the migrant caravan into a hot-button issue ahead of last week's US midterm elections, calling the caravan an "invasion" and warning it was full of "gang members" and "hardened criminals."

On Friday, Trump signed a decree that effectively suspended the granting of asylum for those who cross the border illegally, a move that could drastically slow claims at gates of entry.

The migrants, who have traveled thousands of kilometers to the US border, say they are seeking a better future away from Central America's "Northern Triangle" – El Salvador, Guatemala and Honduras, poor countries where gang violence has fueled some of the highest murder rates in the world.

Two more caravans with about 2,000 migrants each are currently working their way up through Mexico behind the first.

More than 3,000 migrants traveling in caravans have decided to seek asylum in Mexico, according to the authorities.

The remainder, however, say they are determined to press on, despite Trump's measures to stop them.

Facing Trump's wrath themselves, Mexican authorities have alternately hindered and helped the migrants, deploying riot police to block them at the southern border but providing food and shelter at the local level.