Migrant caravan stops to rest in Mexico amid Trump threats 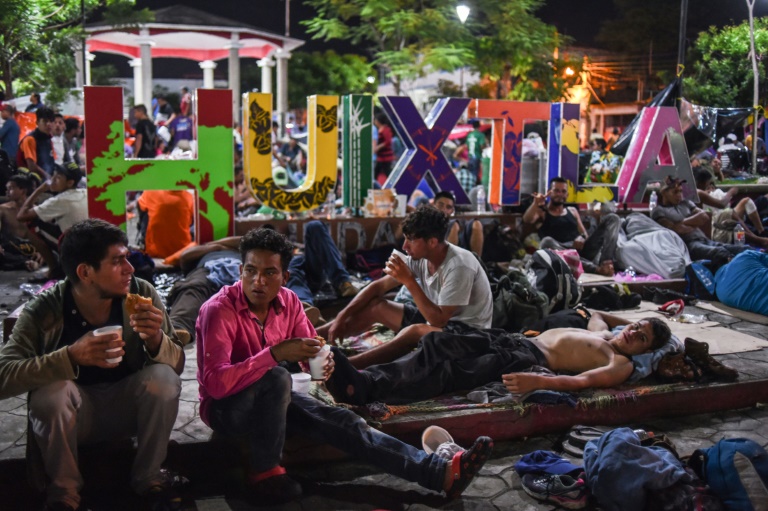 Thousands of migrants in a caravan marching towards the US rest in the Mexican town of Huixtla -- most have been walking for days, and are nursing various injuries. (Photo: AFP)

Thousands of mainly Honduran migrants heading to the United States -- a caravan President Donald Trump has called an "assault on our country" -- stopped to rest Tuesday after walking for two days into Mexican territory.

Sleeping on cardboard boxes or plastic bags, the migrants set up a massive, impromptu camp in the southern town of Huixtla, 70 kilometers (45 miles) from the Mexico-Guatemala border.

Many nursed bleeding feet mangled by days of walking in plastic shoes or flip-flops.

"They're exhausted," said migrant rights activist Rodrigo Abeja, of the group Pueblos Sin Fronteras (People Without Borders), which is accompanying the caravan.

"They're going to rest here today and tonight," and then continue their journey north, he told AFP.

The caravan has become a politically loaded issue, with only two weeks to go before the United States votes in key midterm elections, in which Trump is seeking to protect the Republican majority on Capitol Hill.

Trump has taken to attacking the caravan regularly -- both on Twitter and on the campaign trail -- firing up his conservative base with the anti-immigration rhetoric that helped get him elected in 2016.

On Monday, Trump said the US would start cutting aid to Honduras, Guatemala and El Salvador for failing to stop the migrants, called the caravan a national emergency and alleged it was infiltrated by "Middle Easterners" and members of the ultra-violent gang MS-13.

Mexican Interior Minister Alfonso Navarrete vowed his country would not bow to "any government that intends to provoke a hostile reaction in Mexico.

However, activists accused Mexico of violating the migrants' rights by detaining anyone who tried to apply for asylum.

More than 7,000 people have now joined the caravan, according to the United Nations, including some Central Americans who were already in Mexico.

Late Monday, Mexico allowed another group of about 400 migrants to enter the country after they spent days packed onto a bridge over the Suchiate River, which forms Mexico's southern border with Guatemala.

The caravan had stormed through a series of border barriers Friday and flooded onto the bridge, but hundreds of Mexican riot police blocked their passage.

Another group of about 1,000 Hondurans has meanwhile started a separate march across Guatemala, headed for Mexico and then the United States.

Pojected route of the caravan of migrants heading towards the US. (Image: AFP)

Another group of about 1,000 Hondurans has meanwhile started a separate march across Guatemala, headed for Mexico and then the United States.

The Honduran ambassador in Mexico, Alden Rivera, said the main caravan planned to make its way across Chiapas -- the southern state where it was Tuesday -- to Oaxaca, Veracruz and Tamaulipas, where it would try to cross the US border at McAllen, Texas.

That is the shortest possible route, he said -- about 2,700 kilometers.

But "it's possible that, depending on the reaction from the National Migration Institute and federal police (in Mexico), they could go elsewhere," he told a Mexican radio station.

The migrants -- who set out on October 13 from San Pedro Sula, Honduras -- have been traveling on foot or hitching rides on passing cars and trucks, often crowding onto them with little to hold onto.

One 25-year-old migrant was killed Monday, apparently when he fell off a vehicle that had let him hitch a ride, said state authorities in Chiapas.

Honduras reported another migrant died Saturday when he fell off a vehicle while crossing Guatemala.

Caravan members also face the threat of being robbed, kidnapped or killed by Mexican gangs that extort migrants on their journey.

Humanitarian organizations estimate that one-fourth of the caravan's members are children, a representative of Save the Children told AFP.

Guadalupe Del Carmen, 29, who is traveling with her nine-year-old son, recounted the difficulty of the journey -- such as the moment her son started to cry, "Mommy, I don't want to do this anymore" while crossing the Suchiate River on a raft made of inner tubes.

"He wanted to go back to Honduras. But I explained we can't go back, that the situation in our country is too difficult and that's why we had to run away," she said quietly.

With a homicide rate of 43 per 100,000 citizens, Honduras is one of the most violent countries in the world, according to a Honduran university study.