WORLD Migrant escaping Libya torture: We will go to Europe or die

Migrant escaping Libya torture: We will go to Europe or die 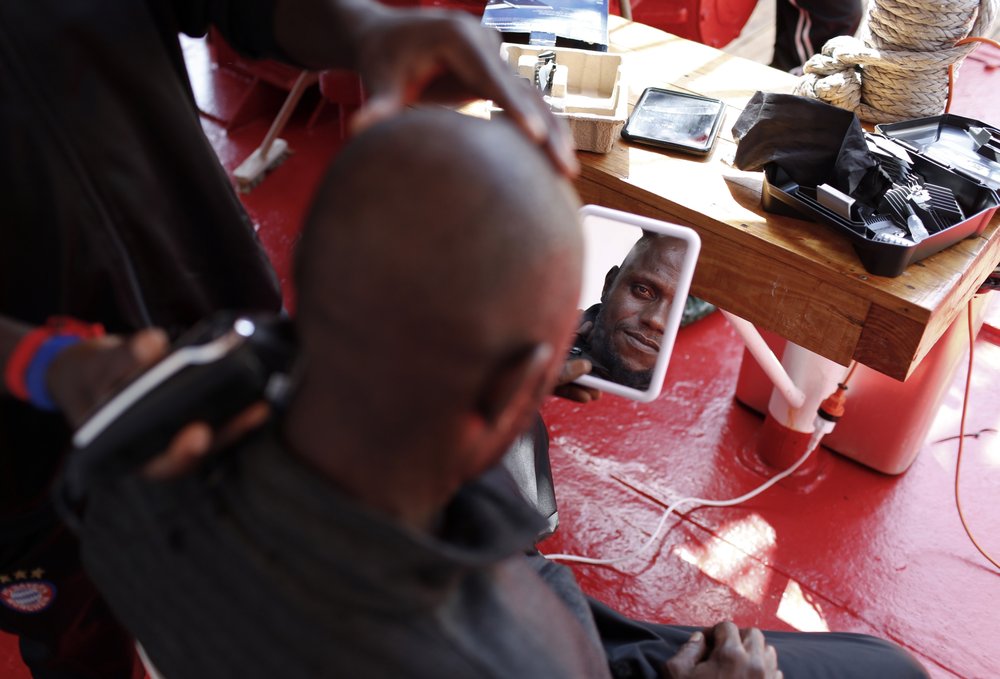 Mouctar Diallo, from Guinea, looks at himself in the mirror as he gets his hair shaved aboard the Ocean Viking humanitarian rescue ship, in the Mediterranean Sea, Friday, Sept. 13, 2019. (Photo: AP)

It was Mouctar Diallo’s fifth attempt to reach Europe by sea. His previous four tries had been foiled by gangs on speedboats who returned him to Libya where he was detained and beaten.

This time, the 28-year-old from Guinea and 49 other sub-Saharan Africans were determined not to let anything stop them.

“Even if the water is not good, we said ‘today we will go to Europe, or we die,’” Diallo recalled.

And so they departed from Zuwara, Libya, on a blue inflatable plastic boat in a bid to make it across the Mediterranean Sea.

About 26 kilometers (16 miles) into their journey a fishing boat approached and offered to help. But Diallo was suspicious. He had been warned that fishermen, just like the criminal gangs, were known to return rescued migrants to Libyan traffickers in exchange for money.

Then, a large red boat approached. The migrants recognized it from social media: It was the Ocean Viking, a Norwegian-flagged ship jointly operated by humanitarian groups SOS Mediterranee and Doctors Without Borders. Everyone was brought on board.

“First I started crying. I was so happy. I said ‘yes! This time my life has changed,’” Diallo told an Associated Press journalist aboard the ship. “It was my fifth try, my last chance. I preferred to die than go back to Libya. I was so happy I can’t even talk about it. I will never forget that day.”

The rescue happened on Sept. 8 — Diallo’s birthday. He is now among dozens of migrants on the ship, waiting for a European country to give them permission to disembark. They pass their time doing laundry or playing chess with plastic bottle caps. Sometimes they sing and dance.

The ship rejected an offer to disembark in Libya. After having a shower and putting on clean clothes donated by the charities, Diallo showed why. He has a knife and bullet wounds on his legs and marks on the top of his skull that his hair has yet to cover. He said they are traces of the violence that migrants are subjected to while held by smugglers in Libya, a country wracked by internal conflict.

“Every day they beat you,” said Diallo, whose nickname is “the general” because of all his warlike scars.

Other migrants had similar stories. Of a dozen people who agreed to speak to the AP, every single one said they were beaten, abused or raped in Libya.

In recent years, European Union countries have scaled back their own rescue operations in the central Mediterranean and handed over responsibility to the EU-funded Libyan coast guard. That has helped sharply reduce migrant arrivals in Italy in the past two years. The UN refugee agency says this year more than 6,000 migrants were intercepted at sea by the EU-funded Libyan coast guard and brought back to the North African country.

Hassiba Hadj-Sahraoui, advocacy adviser at Doctors Without Borders, said that while the EU is celebrating a drop in irregular migration, as well as deaths at sea, “what they don’t tell you is what is happening to the people who are stuck in Libya.”

Migrants are held longer by traffickers “who are realizing that the way to make money is not necessarily by crossing the Mediterranean but by extorting people and their families,” she said.

Diallo decided to leave his village in Guinea after seeing how some families were lifted out of poverty by relatives who had gone to Europe. Families who used to have nothing were now building houses thanks to money sent from Europe. So, he wanted to give his family the same, and pay for the school of his younger brother and sister.

Diallo used to work in construction, making bricks, but he doesn’t know where he will end up or what he will be doing. He just wants to make it to Europe, find work and earn money. Going back to Guinea, where 55% of people live in poverty according to the UN, is not an option, Diallo said. Not after he’s come this far.

But he’s warned countrymen who are thinking about entering Europe irregularly about taking the route through Libya.

“They don’t even consider us humans in Libya,” he said. “They rape men, they rape women; they do everything there. They do whatever. Only God can help us.”