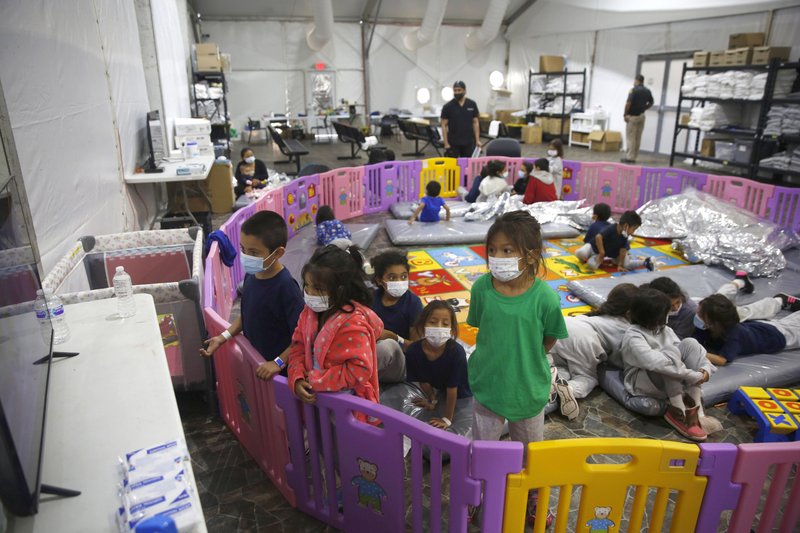 Young unaccompanied migrants, from ages 3 to 9, watch television inside a playpen at the U.S. Customs and Border Protection facility, the main detention center for unaccompanied children in the Rio Grande Valley, in Donna, Texas, Tuesday, March 30, 2021. (Photo: AP)

Overall, CBP's main child processing center, a compound of white tents in Texas' Rio Grande Valley, held over 4,100 migrants, more than 3,400 of them children who traveled to the U.S.-Mexico border alone. The rest of the migrants being housed were families.

The facility, designed for 250 people under guidelines from the Centers for Disease Control and Prevention during the coronavirus pandemic, has had to adapt amid a spike in families and unaccompanied children crossing the border.

The Biden administration allowed journalists to see conditions for the first time since the facility opened Feb. 9.

It was a grim picture.

A 3,200-square-foot (297-square-meter) space had been divided into several rooms for 32 children each under CDC guidelines, each separated by thick plastic walls instead of the chain-link fence used by previous administrations. Despite the health recommendations, one of the “pods" held nearly 700 kids, another had nearly 600 and others had just above 500. Everyone wore masks, but COVID-19 tests aren't done unless they show symptoms.

Doors to the rooms were open for free movement but there was little room to roam and no one to play games. Most children just sat on the ground close together, chatting quietly. Some were wrapped in foil blankets. Lights are dimmed at night.

Children, most of them between 13 and 17, are separated by age. Families occupied a separate pod that was less crowded than the jam-packed rooms for older children.

A room for “tender age” children from 3 to 9 years old consisted of a walled playpen with mats on the floor and far more space than the eight pods for older children. An 11-year-old boy cared for his 3-year-old sister, and a 17-year-old cared for her newborn.

“I’m a Border Patrol agent. I didn’t sign up for this,” Oscar Escamilla, acting executive officer of the Border Patrol’s Rio Grande Valley sector, said while looking at the younger kids.

Children are processed in the tent facility in the town of Donna before being taken to longer-term care facilities run by U.S. Health and Human Services and then placed with a family member, relative or sponsor.

About two dozen of some 270 children being transferred to HHS midday tested positive for COVID-19 — the only time they are tested unless they exhibit symptoms earlier. Escamilla said the overall positivity rate at the Donna facility was about 14%.

As they prepared to leave, children who tested negative for COVID-19 played soccer in the outdoor recreation area, where they can go three times a day when their pods are being cleaned. Those who tested positive for the virus gathered around metal benches off to the side and will still go to HHS centers.

“The intent of the Border Patrol is not detention. We’re not in the business of detention,” said Escamilla, the official who supervised the media tour. “We’re forced into the business because we can’t turn them over to anybody.”

HHS is housing children at convention centers in Dallas and San Diego and is opening large-scale sites in San Antonio, El Paso and elsewhere.

A large HHS facility is being built near the holding center in Donna, separated by a chain-link fence. Noise from construction equipment filled the air near seven buses that were to take children to other HHS facilities.

About 250 to 300 children enter the Donna facility daily and far fewer leave, a “lopsided” difference that Escamilla said was leading to more crowded conditions. It has held as many as 4,600 migrants.

More than 17,000 unaccompanied children were in U.S. custody as of Monday, about 12,000 with HHS and the rest with Customs and Border Protection. On Monday, 446 children entered CBP custody but only 229 went to HHS.

HHS, which opened a facility Tuesday for 500 children at Fort Bliss in Texas, is working to build up to a capacity of 13,500 beds, spokesman Mark Weber said.

Several hundred kids and teenagers are crossing the border daily, most fleeing violence, poverty or the effects of natural disasters in Central America. President Joe Biden has declined to resume his predecessor's practice of expelling unaccompanied children.

But his administration has continued expelling adults under a coronavirus-related public health declaration enacted by former President Donald Trump. Biden also has tried to expel most families traveling together, but changes in Mexican law have forced agents to release many parents and children into the U.S.

In some cases, parents refused entry into the U.S. have sent their children across the border alone, hoping they will be placed with relatives eventually.

Biden has faced intense pressure to bring more transparency to how large numbers of migrant children are being treated. In his administration’s first tour of the Donna holding facility, two journalists from The Associated Press and a crew from CBS shared text, photos and video with other news outlets as part of a pool arrangement.

At the facility, children entered a tent with a dirt floor and three rows of bleacher-style seats. About 60 children waited to be admitted Tuesday, all wearing masks and seated close together.

They then go into a small room for lice and scabies inspection and a general health check, including whether they have a fever. Their hair is hosed down.

The facility is staffed by physician assistants and nurse practitioners, who perform psychological tests, including asking children if they have had any suicidal thoughts. All shoelaces are removed to avoid harm to anyone.

Amid the loud hum of air conditioning vents, children are led to a room for processing, with anyone 14 and older getting photographed and having their fingerprints taken. Younger kids don't.

In another room, agents ask them if they have a contact in the U.S. and allow the child to speak with them by phone. Plastic shields separate the agents and the children, who are seated at tables. They get bracelets with a barcode that shows a history of when they showered, medical conditions and any other personal information.

All children are given notices to appear in immigration court, clearing the way for them to be released to Health and Human Services. About 1,200 children were ready for release Tuesday but there was nowhere to send them, Escamilla said.