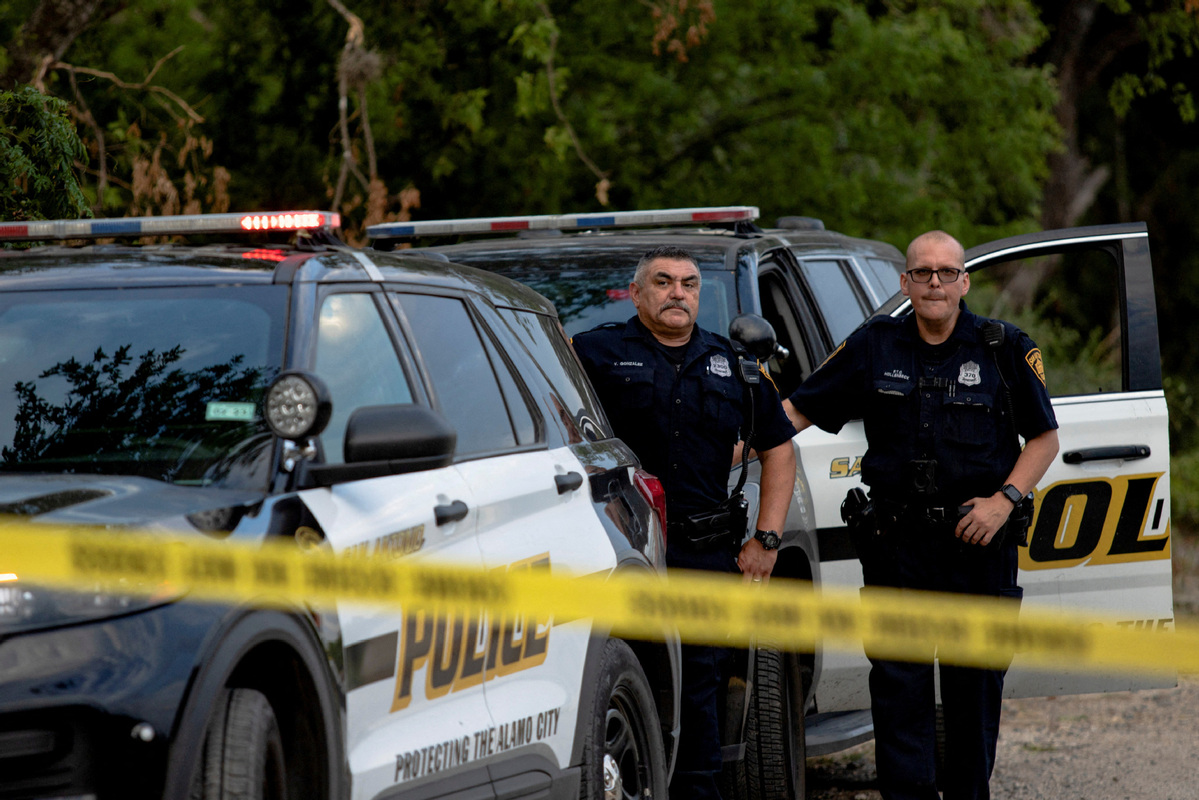 Law enforcement officers work at the scene where migrants were found dead inside a trailer truck in San Antonio, Texas, US, June 28, 2022. [Photo: Agencies]

The death of 51 migrants in an overheated tractor-trailer sparked some political finger-pointing in the US on Tuesday.

Texas Governor Greg Abbott tweeted on Monday that "these deaths are on Biden. They are a result of his deadly open border policies."

Many Twitter users countered that if the border were open, the migrants wouldn't be hiding in a truck.

US President Joe Biden issued a statement on Tuesday vowing to crack down on human smuggling.

"This incident underscores the need to go after the multibillion-dollar criminal smuggling industry preying on migrants and leading to far too many innocent deaths," he said.

"Exploiting vulnerable individuals for profit is shameful, as is political grandstanding around tragedy, and my administration will continue to do everything possible to stop human smugglers and traffickers from taking advantage of people who are seeking to enter the United States between ports of entry," the president said.

The deaths were under a brutal Texas sun in San Antonio, with outdoor temperatures topping 100 F, making it one of the deadliest tragedies in Mexico-Texas illegal border crossings. More than a dozen migrants, including four children, are recovering in a hospital.

The driver of the truck and two other people have been arrested, US Representative Henry Cuellar of Texas told The Associated Press.

Two Mexican nationals were charged with possessing firearms while in the United States illegally, according to court documents and US authorities.

Cuellar said the truck had passed through a Border Patrol checkpoint northeast of Laredo, Texas, on Interstate 35. He did not know if migrants were inside the truck when it cleared the checkpoint.

The truck was found on Monday evening shortly before 6 pm by a city worker who heard a cry for help and went to investigate, according to local officials. He found the trailer door partially open, looked inside and saw the dead.

The bodies were hot to the touch, and people inside suffered from heat stroke and exhaustion, San Antonio Fire Chief Charles Hood said at a news conference on Monday night.

"We are not supposed to open up a truck and see stacks of bodies in there. None of us could imagine that," Hood said.

Forty-six people were found dead at the scene, and another five died later. In total, 39 males and 12 females died. The victims were primarily from Mexico and other Central American countries.

"This is nothing short of a horrific human tragedy," San Antonio Mayor Ron Nirenberg said at the news conference. "We hope that those responsible for putting these people under such inhuman conditions are prosecuted to the full extent of law."

San Antonio has been a popular drop-off spot for illegal migrant trafficking. Near midnight on June 3, border agents encountered more than 20 migrants who ran away from a tractor-trailer and needed medical attention near a highway.

In June 2021, about 60 to 80 migrants were found being transported in air-conditioned trailers within the city limit.

Guatemala's foreign ministry said on Twitter that the country's consulate in McAllen, Texas, had contacted forensic experts working to identify if any of the deceased and hospitalized were from Guatemala.

Mexico President Andres Manuel Lopez Obrador said Tuesday morning that so far 22 of the dead have been identified to be from his country.

Mexican Foreign Minister Marcelo Ebrard said Tuesday he had spoken with US Secretary of Homeland Security Alejandro Mayorkas about the deaths.

"We will work together, Mexico and the United States, to find and punish those responsible," Ebrard said on Twitter.

Hours before the tragedy was discovered, Abbott talked about his achievements in border control. He tweeted that Operation Lone Star that he launched saw more than 265,500 migrants apprehended, and more than 22,000 migrants turned back at the border. Despite Texas' efforts, US Customs and Border Patrol (CBP) data show that in May 2022, there were 239,416 arrests along the Mexico border, up from 180,597 a year ago.

For fiscal year 2022 starting in October, by May the total Mexico border arrests reached more than 1.53 million, a 66 percent increase from 930,000 arrests a year ago for the same period.

Data suggest that a pandemic-related policy enacted during the Trump administration contributed to the increase in attempted border crossings.

Called Title 42, the World War II-era health policy allows border agents to expel most migrants without giving them a chance to apply for asylum, in order to stop the spread of the coronavirus.

"The large number of expulsions during the pandemic has contributed to a higher-than-usual number of migrants making multiple border crossing attempts, which means that total encounters somewhat overstate the number of unique individuals arriving at the border," said a June 15 CBP statement.

Biden had sought to lift Title 42 in May, but a federal judge in Louisiana issued a preliminary injunction keeping the rule in place. The Justice Department has pledged to appeal the ruling.

CBP reported 557 deaths on the Southwest border in the 12 months ending Sept 30, more than double the 247 deaths reported in the previous year and the highest since it began keeping track in 1998. Most were related to heat exposure.

CBP Commissioner Chris Magnus had warned of the danger of crossing the border during the summer a couple of weeks ago.

"The terrain along the Southwest Border is extreme, the summer heat is severe, and the miles of desert that migrants must hike after crossing the border are unforgiving. Our message to those who would try and gain illegal entry to the United States remains the same — don't make the dangerous journey only to be sent back."