WORLD Migrants arrive in Europe with big hopes, many questions

Migrants arrive in Europe with big hopes, many questions

As the weary passengers aboard a rescue ship approached Sicily at the end of an agonizing journey from North Africa, 30-year-old Seke Awa called a friend back in Libya the moment she got cellphone reception. 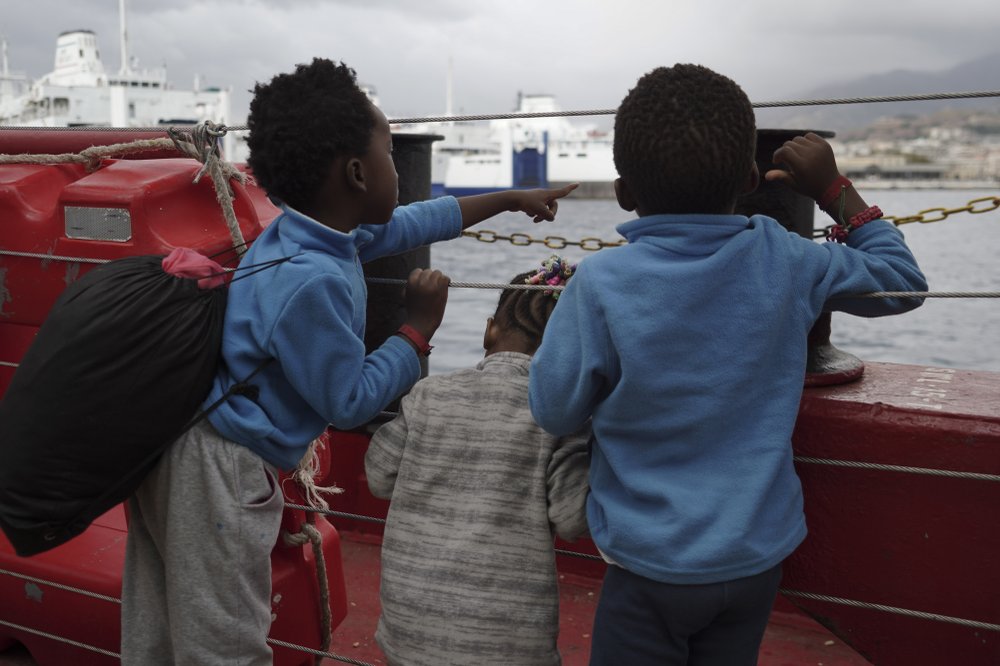 Children wave at a boat from aboard the Ocean Viking as it reaches the port of Messina, Italy, Tuesday, Sept. 24, 2019. The humanitarian ship has docked in Italy to disembark 182 men, women and children rescued in the Mediterranean Sea after fleeing Libya. (Photo: AP)

"I told her we are on the big boat and sent her courage, that she needs to have hope. One day her suffering may end," said Awa, a native of Cameroon. "She was crying."

A total of 182 people, rescued a week ago from fragile boats off Libya's coast, arrived in Italy on Tuesday, filled with excitement and hope, but also myriad questions about what comes next.

Will they be allowed to stay in Europe? If so, in which country? And will they have a choice? Can they go to school even if they are adults? How much does a SIM card cost?

Nelson Oyedele, 37, said he fled violence and poverty in Nigeria with his wife and four small children.

"I don't know where I'm going to end up, I'm just going," he told an Associated Press reporter on the Ocean Viking, a Norwegian-flagged rescue ship run by the humanitarian organizations Doctors Without Borders and SOS Mediterranee. "My daughter says she wants to become a doctor. She could never become a doctor back in our country. Maybe here she will."

Oyedele was the only man on the ship traveling as part of a complete family. The rest had left behind wives, husbands, children and parents in their home countries, mostly in sub-Saharan Africa.

Abdul Kerim, 20, said he fled persecution in Togo and wants to reunite with brothers and aunts living in Germany. He hopes to be granted asylum and is open to any kind of work, though he dreams of having his own construction company.

"I will work for Europe and give all I have," he said. "If possible I would like my family to join me." His wife and 2-year-old son are still in Togo.

However, Kerim and others disembarking in Messina will have no control over where they end up. Their fate will be decided in negotiations among a few European countries that agreed to take them in.

Asylum is typically reserved for people fleeing war and persecution. People escaping poverty in West Africa rarely qualify. In Germany, only 6.5% of Nigerians whose asylum cases have been decided this year received some sort of protection. For Syrians, it was nearly 84%.

The migrants on the Ocean Viking came from a number of countries, including Sudan, Cameroon, Guinea, Mali, Egypt, Morocco and Bangladesh. As they arrived in Messina, their immediate worry was contacting loved ones for the first time since they left Libya, where rape, torture and abuse are widespread at the hands of smugglers demanding ransom payments from the migrants' families.

The Ocean Viking docked in Messina after receiving permission to enter Italy, a country that until a change of governments this month had closed its ports to humanitarian rescue ships, saying their activities encouraged human smuggling. Police and Red Cross workers waited for the migrants on shore.

As they approached Sicily, the passengers marveled at a gargantuan cruise ship docked on the Italian mainland across the Strait of Messina.

"Is there a hotel inside?" asked one of the men watching the floating behemoth from the deck of the much smaller rescue ship. "It's so amazing," said another. The children waved incessantly.

Halfway across the world, on the sidelines of the U.N. General Assembly in New York, members of the Italian government said most of the migrants on the Ocean Viking would be sent to other European countries.

They called for a permanent European solution to migrant arrivals, instead of the current practice of dealing with the issue ship by ship. They said they also intend to make it easier to return migrants who don't qualify for protection in Europe.

Premier Giuseppe Conte said Italy will soon deliver "good news about a much more effective repatriation system at a European level. Italy is preparing for a decisive turning point."